If you’re a Saudi prince who disagrees publicly with the regime, you will be drugged and kidnapped no matter what country you live in. 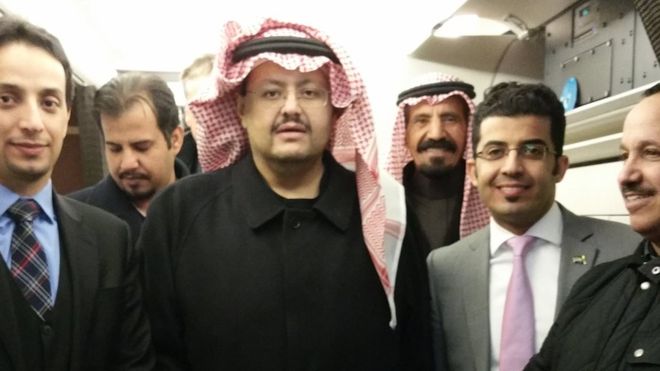 If you’re a Saudi prince who disagrees publicly with the regime, you will be drugged and kidnapped no matter what country you live in.

In the last two years, three Saudi princes living in Europe have disappeared. All were critical of the Saudi government – and there is evidence that all were abducted and flown back to Saudi Arabia… where nothing further has been heard from them.

Early in the morning on 12 June 2003, a Saudi prince is being driven to a palace on the outskirts of Geneva.

His name is Sultan bin Turki bin Abdulaziz, and the palace belongs to his uncle, the late King Fahd. It’s the king’s favourite son, Prince Abdulaziz bin Fahd, who has invited him to breakfast.

Abdulaziz asks Sultan to return to Saudi Arabia – where he says a conflict over Sultan’s criticisms of the Saudi leadership will be resolved.

Sultan refuses, at which point Abdulaziz excuses himself to make a phone call. The other man in the room, the Saudi Minister of Islamic Affairs, Sheikh Saleh al-Sheikh, leaves too and after a few moments masked men rush in. They beat Sultan and handcuff him, then a needle is plunged into his neck.

Unconscious, Sultan is rushed to Geneva airport – and carried on to a Medevac plane that is conveniently waiting on the tarmac.

Such, at least, is Sultan’s account of the events, as told to a Swiss court many years later.

Among Sultan’s staff, waiting at a Geneva hotel for him to return from his breakfast appointment, was his communications officer, Eddie Ferreira.

“Progressively, as the day went on the silence became deafening,” he remembers. “We couldn’t reach the security team. That was the first real alert. We tried to contact the prince; there was no response, no answer.”

Then, in the afternoon, two unexpected visitors arrived.

“The Saudi ambassador to Switzerland came in with the general manager of the hotel and quite simply just told everybody to vacate the penthouse and get out,” Ferreira says. “The prince was in Riyadh, our services were no longer required, and we could leave.”

What had Prince Sultan done that could have led his family to violently drug and kidnap him?

The previous year he had arrived in Europe for medical treatment, and started giving interviews critical of the Saudi government. He condemned the country’s record on human rights, complained about corruption among princes and officials, and called for a series of reforms.

Ever since 1932, when King Abdulaziz, known as Ibn Saud, founded Saudi Arabia, the country has been ruled as an absolute monarchy. It does not tolerate dissent. 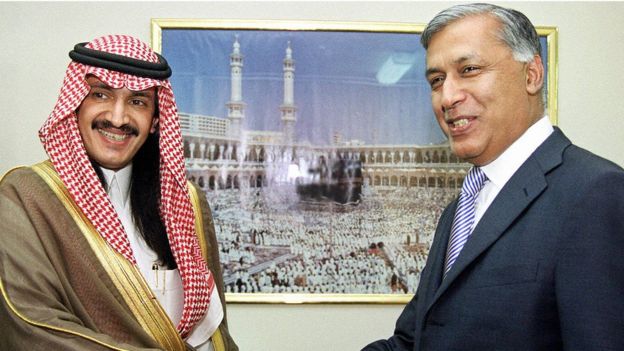 Prince Turki bin Bandar was once a major in the Saudi police, with responsibility for policing the royal family itself. But a bitter family dispute over a contested inheritance landed him in prison, and on his release he fled to Paris, where, in 2012, he began posting videos on YouTube calling for reform in Saudi Arabia.

The Saudis reacted as they had with Prince Sultan, and tried to persuade Turki to return. When Ahmed al-Salem, the deputy minister of the interior called, the prince recorded the conversation and posted it online.

“Everybody’s looking forward to your return, God bless you,” says the deputy minister.

“Looking forward to my return?” replies Turki. “What about the letters your officers send me? ‘You son of a whore, we’ll drag you back like Sultan bin Turki.'”

The deputy minister replies reassuringly: “They won’t touch you. I’m your brother.”

“No they’re from you,” says Turki. “The Ministry of Interior sends them.”

Turki went on publishing videos until July 2015. Then, sometime later that year, he disappeared.

“He called me every month or two,” says a friend, the blogger and activist Wael al-Khalaf.

“Then he disappeared for four or five months. I was suspicious. [Then] I heard from a senior officer in the kingdom that Turki bin Bandar was with them. So they’d taken him, he’d been kidnapped.”

After a long search for news of Turki, I found an article in a Moroccan newspaper, which said that he had been about to return to France after a visit to Morocco, when he was arrested and jailed. Then, following a request from the Saudi authorities, he was deported with the approval of a Moroccan court.

We don’t know for certain what happened to Turki bin Bandar, but before he disappeared he gave his friend Wael a copy of a book he’d written, in which he had added what may be a prophetic note.

“Dear Wael, these statements are not to be shared unless I am kidnapped or assassinated. I know I will be kidnapped or they will assassinate me. I also know how they abuse my rights and those of the Saudi people.” 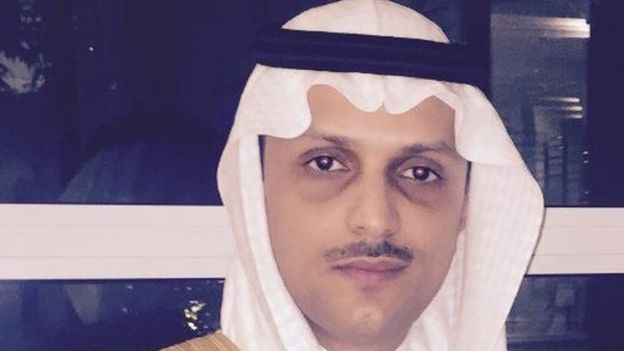 Around the same time as Prince Turki vanished another Saudi prince, Saud bin Saif al-Nasr – a relatively minor royal with a liking for Europe’s casinos and expensive hotels – shared a similar fate.

In 2014 Saud began writing tweets that were critical of the Saudi monarchy.

He called for the prosecution of Saudi officials who’d backed the overthrow of Egyptian President Mohammed Morsi the previous year.

After an anonymous Saudi prince wrote two letters calling for a coup to remove King Salman, Saud publicly endorsed them – the only royal to do so. This was tantamount to treason, and may have sealed his fate.

A few days later, he tweeted: “I call for the nation to turn the content of these letters into popular pressure.” Then his Twitter account went silent.

Another dissident prince – Prince Khaled bin Farhan, who fled to Germany in 2013 – believes Saud was tricked into flying from Milan to Rome to discuss a business deal with a Russian-Italian company seeking to open branches in the Gulf.

“A private plane from the company came and took Prince Saud. But it didn’t land in Rome, it landed in Riyadh,” Khaled says.

“It turned out Saudi intelligence had fabricated the entire operation,” he claims.

“Now Prince Saud’s fate is the same as Prince Turki’s, which is prison… The only fate is an underground prison.”

Prince Sultan, being higher up the royal pecking order, was shuttled between prison and house arrest. But his health was also deteriorating, so in 2010 the royal family allowed him to seek medical treatment in Boston, Massachusetts.

What he did from the safety of his US exile must have horrified the Saudis – he filed a criminal complaint in the Swiss courts, accusing Prince Abdulaziz bin Fahd and Sheikh Saleh al-Sheikh of responsibility for his 2003 kidnap.

His American lawyer, Clyde Bergstresser, obtained a medical record from King Faisal Specialist Hospital in Riyadh, where Sultan was admitted on 13 June 2003, which indicated that a tube had been placed into his mouth to help him breathe while anaesthetised, and that one side of his diaphragm was paralysed – presumably as a result of the assault.

For the first time a senior Saudi royal was launching a criminal complaint, in a Western court, against another family member.

But Bergstresser says the Swiss authorities have shown little interest in the case.

“Nothing has been done to pursue what occurred at the airport,” he says. “Who were the pilots? What were the flight plans when these planes from Saudi Arabia arrived? This abduction occurred on Swiss soil and one would think that there would be an interest in finding out how that occurred.” 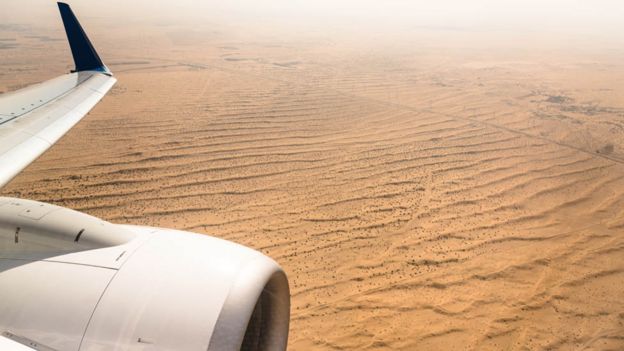 In January 2016, Sultan was staying at an exclusive Paris hotel when, like Saud bin Saif al-Nasr, he was tempted on to an aeroplane.

He was planning to visit his father, also a well-known critic of the Saudi government, in Cairo, when the Saudi consulate offered him and his entourage of about 18 – including a personal doctor and nurses and bodyguards from the US and Europe – the use of a private jet.

Despite what had happened to him in 2003, he accepted.

Two members of the entourage explain how events unfolded. Both prefer to remain anonymous.

“We pulled on to the tarmac and in front of us was a huge airplane, with… it had the country of Saudi Arabia written on it,” says one.

“It was a little eerie because there were a lot of crew members on board. All of them were male,” says the other.

The plane took off with in-flight monitors showing it was bound for Cairo. But two-and-a-half hours into the flight, the monitors went blank.

Prince Sultan was sleeping in his room, but he woke up about an hour before landing. He looked out of the window, and appeared anxious, the former members of his staff say.

As it dawned on the passengers that they were about to land in Saudi Arabia, Sultan started banging on the cockpit door and crying for help. A crew member ordered the prince’s team to stay in their seats.

“We looked out the window and we just saw a bunch of people get out with their rifles slung over their chest and surrounded the plane,” says one of the members of his entourage.

The soldiers and cabin crew dragged Sultan from the plane. He was screaming at his team to call the US embassy.

The prince and his medics were taken to a villa and put under armed guard. On the plane the others waited nervously. They were later taken to a hotel, held for three days without passports or telephones, then allowed to fly to a destination of their choice.

Before they left, a Saudi official, who the prince’s staff recognised as one of the “flight attendants” on the plane, offered an apology.

“He told us that we were simply in the wrong place at the wrong time. And that he was sorry for the inconvenience,” one of them says.

The other adds: “I wasn’t inconvenienced – I was kidnapped. I was held against my will in a country that I did not choose to go to.”

It was an astonishing situation. Together with Prince Sultan, about 18 foreign nationals had been kidnapped, taken to Saudi Arabia, and held by the Saudi military.

There has been no news of Prince Sultan since these events.

I asked the government of Saudi Arabia to respond to the allegations in this film. It declined to comment. 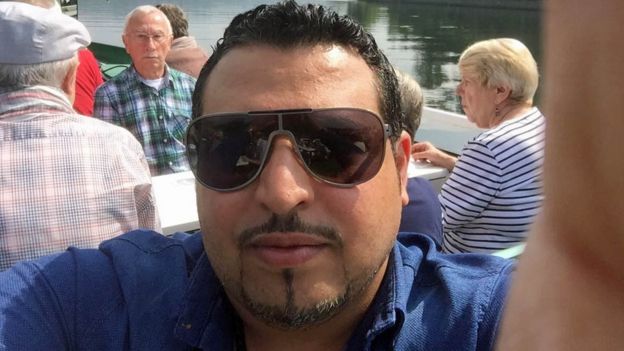 Meanwhile Prince Khaled, still exiled in Germany, worries that he too will be forced to return to Riyadh.

“There were four of us family members in Europe. We criticised the family and its rule in Saudi Arabia. Three of us were kidnapped. I’m the only one left,” he says.

“I’m convinced. I’ve been convinced for a long time. If they could do it, they’d have done it by now. I’m very cautious, but it’s at the price of my freedom.”