50 Inches of Rain in Some Places on Harvey’s Path 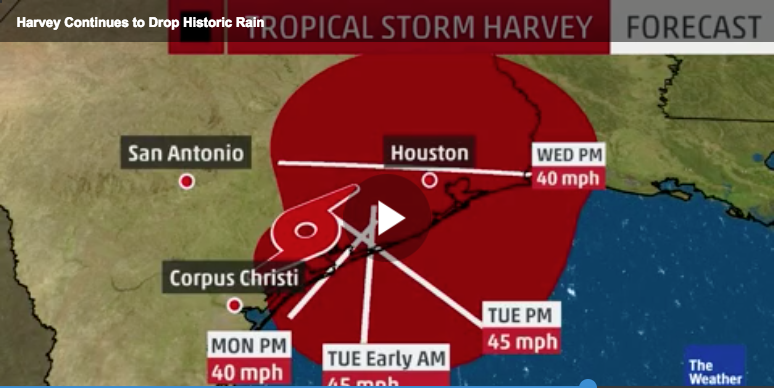 50 Inches of Rain in Some Places on Harvey’s Path

Rainfall from Harvey Could Reach 50 Inches in Some Spots, Highest Ever Recorded in Texas; Catastrophic Flooding to Continue for Days

Periods of torrential rain will continue over parts of Texas the next several days with more flooding likely.

Parts of southeast Houston saw more than two feet of rain in 24 hours.

The flooding has rivaled what was observed during Tropical Storm Allison in 2001 in some locations.

Isolated rainfall totals from Harvey could be up to 50 inches by later this week.

Tropical Storm Harvey has stalled over Texas where extreme rainfall has occurred in the Houston metro area, leading to record-breaking, catastrophic flooding. Days of drenching downpours are ahead, along with the potential for tornadoes and lingering coastal flooding.

Localized rain amounts of up to 50 inches are not out of the question once Harvey’s rain is finished later this week. This may end up being one of the worst flood disasters in U.S. history.

A flash flood emergency is in effect for the Houston and Galveston metro areas until 1:15 a.m. CDT.

“Water rescues are ongoing and widespread flooding will continue, and perhaps worsen at some locations. Historic flooding is expected to continue in the Houston metropolitan area through the foreseeable future,” the National Weather Service said in the aforementioned warning.

The average rainfall within the Harris County Emergency Management network has exceeded that of Tropical Storm Allison (2001) in almost half of the time (2 to 3 days versus 5 days).

The most rain from an Atlantic tropical cyclone or its remnants is 48 inches from Tropical Storm Amelia in 1978.

Record flooding has occurred, and the flooding has rivaled what occurred in Tropical Storm Allison (2001) in some areas. Reports from the Harris County Flood Control District (HCFCD) include:

“Volume-wise, this has likely reached the rainfall that fell during Allison in June 2001,” NOAA’s Weather Prediction Center said in a forecast discussion Sunday morning.

Major flooding from up to 19 inches of rain has also occurred to the east of Austin in Bastrop and Caldwell counties where water rescues have been reported. 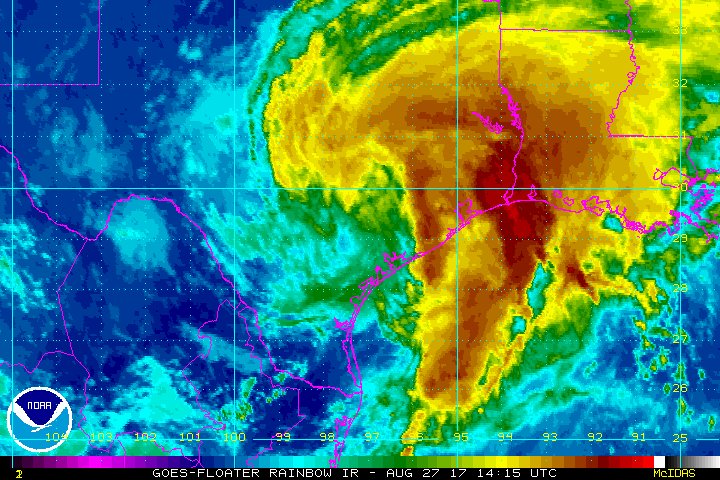 Harvey made landfall Friday night near Rockport, Texas, north of Corpus Christi, as the first Category 4 hurricane to landfall in the U.S. since Charley in August 2004.

The circulation from Harvey will meander over the state for days to come, resulting in additional double-digit rainfall amounts, potentially including Houston once again. Here’s what to expect.

Days of Heavy Rain Ahead

Harvey’s center of circulation is moving very slowly over southeast Texas and is expected to crawl southeastward toward the middle Texas coast over the next couple of days.

The center of Harvey is forecast to move off the middle Texas coast Monday and meander just offshore through Monday night.

Bands of heavy rain are wrapping into the east side of the circulation center, resulting in the disastrous flooding that has unfolded in parts of southeast Texas. Rain from Harvey is also affecting areas north and west of its circulation to the Interstate 35 corridor.

(MORE: Harvey By the Numbers)

Harvey is caught in a zone of light steering winds aloft and, therefore, will meander near the Texas coast for days to come.

The tropical storm is currently caught in between two areas of high pressure and, without another weather system to scoop Harvey up, it will be stuck for the next few days.

The projected path shows the expected track of the circulation center. Note that impacts such as heavy rain and storm surge can extend beyond this forecast path.

A tropical cyclone’s rainfall potential is a function of its forward speed, not its intensity. Several days of torrential rain will add up to prolific multi-day totals, regardless of any downgrade of Harvey.

Areas of heavy rain may persist in parts of Texas or the adjacent lower Mississippi Valley into at least part of the Labor Day weekend.

Here are the latest rainfall forecasts through Friday from the National Hurricane Center and NOAA’s Weather Prediction Center:

Areas in red, purple, pink and white are in the highest threat for flooding rainfall from Harvey through the weekend. Some of this rain may linger into Thursday or beyond in some areas.

In addition to the reports mentioned earlier in this article, here are other locations that are forecast to experience river flooding this week.

Local National Weather Service offices have not minced words about the rainfall flooding, warning that some structures could become uninhabitable or be washed away. Roads and bridges could be closed, with some weakened or washed out, due to the record river flooding expected in some areas.

(MORE: Your Vehicle Can Be the Biggest Danger in a Flood)

Rivers forecast to be above flood stage by the National Weather Service River Forecast Centers, as of Sunday evening, Aug. 27. Locations in major flood are denoted by purple dots, moderate flood by red dots and minor flood by orange dots.(NOAA/NWS)

Homes may be flooded along stretches of the Brazos, Colorado, Guadalupe, Navidad and San Bernard rivers.

Flooding along the Brazos River in Richmond, Texas, could exceed the previous record crest set just one summer ago, on June 2, 2016.

Much of the west and southwest sides of Wharton, Texas, could be under water from the Colorado River. The river may overtop levees by several feet in Bay City.

The Guadalupe River may flood parts of the city of Victoria. Upstream, the west side of the town of Cuero may experience disastrous flooding, potentially forcing all roads to be shut down into town except Highway 87. Near Thomaston, hundreds of homes may be flooded to over 10 feet, according to National Weather Service accounts of previous floods.

Given the longevity of the rainfall and floodwater draining from smaller tributaries, it’s likely mainstem rivers such as the Brazos, Colorado and Guadalupe rivers will remain above flood stage into the Labor Day weekend, possibly beyond.

These floodwaters will drain toward areas near the middle Texas coast hammered by storm-surge flooding and destructive winds from Harvey’s initial landfall.

Persistent onshore winds are still keeping water levels higher than normal along the middle Texas coast, including such areas as Port O’Connor and Port Lavaca. This coastal flooding may continue through multiple high-tide cycles the next few days, only slowly subsiding with time. 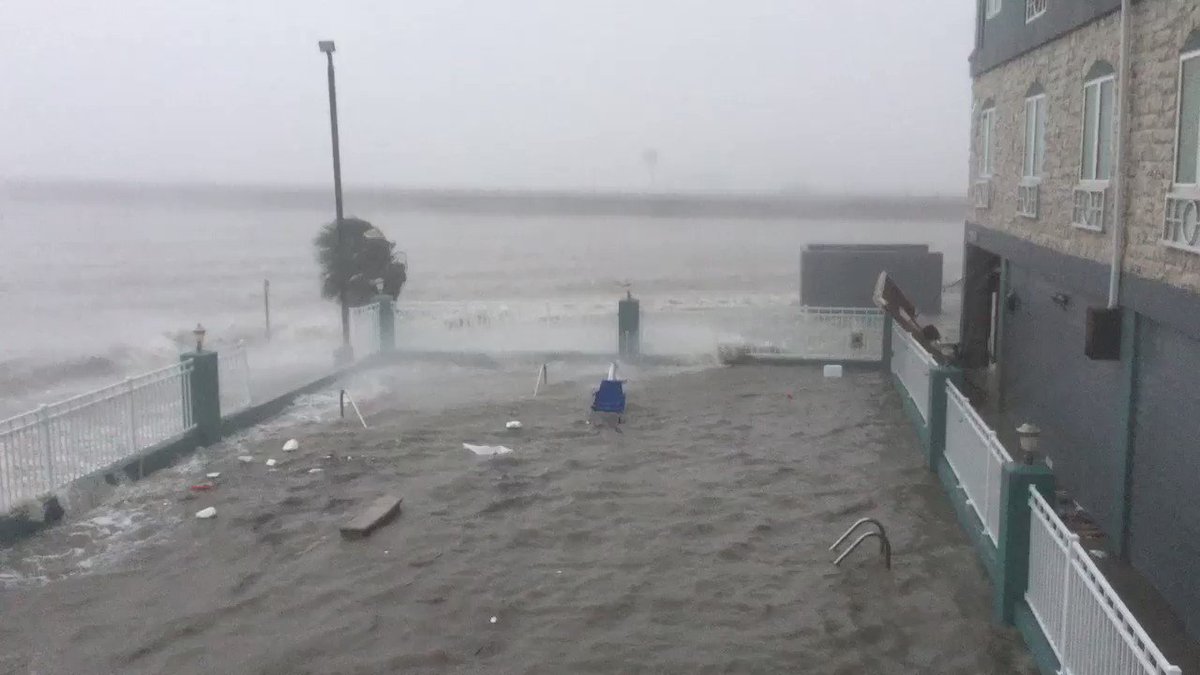 These surge-choked bays and inlets won’t allow these swollen rivers to drain fast enough, backing up these rivers and worsening flooding upstream, just as the floodwater upstream arrives.

It will be an arduously slow process to first get coastal water levels down, then drain the massive volume of floodwater upstream. This process will likely continue past Labor Day, in some areas.

As a growing volume of water from swollen rivers tries to drain downstream, it will be met by still elevated water levels driven by onshore winds from the Gulf of Mexico.

Harvey made landfall Friday night near Rockport, a town of less than 10,000 people and about 30 miles up the Texas coast from Corpus Christi.

Harvey is this nation’s first major (Category 3 or stronger) hurricane landfall since Hurricane Wilma struck South Florida in October 2005, an almost 12-year run. A multi-day deluge of the Texas Gulf Coast with catastrophic and life-threatening flooding and destructive winds could leave areas uninhabitable for an extended period of time, the National Weather Service has warned.

Harvey went from a tropical depression to a major hurricane in 56 hours. It intensified rapidly to a Category 4 hurricane with winds up to 130 mph after moving over a pocket of hot water in the Gulf.

Harvey is also the strongest landfall in this area, known as the Texas Coastal Bend, since Hurricane Carla, in September 1961, produced catastrophic damage from storm surge and high winds in Port O’Connor and Palacios, Texas, among other locations.

The only other Category 4 landfall of record near the Texas Coastal Bend was the infamous Indianola hurricane of August 1886, which devastated the town of Indianola just 11 years after another Category 3 hurricane, eventually turning the former bustling port into a ghost town.

A storm surge of more than 6.6 feet was recorded at Port Lavaca, Texas, with destructive surge reported in other locations along the Texas Coastal Bend.

There have been over a dozen tornadoes so far, with the total number of tornadoes still yet to be determined.

One apparent tornado crossed Interstate 10 and hit a storage facility in the western Houston metro suburb of Katy around 5:30-6 a.m. CDT Saturday morning.

At least one tornado was confirmed in northwestern Harris County, Texas.

In the southwest suburb of Missouri City, more than 50 homes were damaged in the Sienna Plantation neighborhood.

Here are the latest rainfall totals through 4 p.m. CDT Sunday:

Here are the highest wind gusts we’ve seen from Harvey:

Check back with weather.com for updates on Harvey.