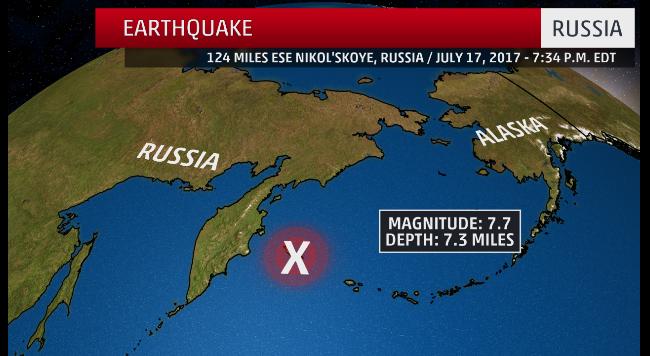 By Brian Donegan
The Weather Channel

A massive 7.7 magnitude earthquake struck between Russia and Alaska Monday evening, according to the U.S. Geological Survey.

The earthquake occurred at 7:34 p.m. EDT approximately 124 miles east-southeast of Nikol’skoye, Russia, off the coast of Russia’s Kamchatka Peninsula, at a depth of 7.3 miles.

This quake was followed by several aftershocks, some of which were greater than 5.0 magnitude.

Originally, the USGS estimated the earthquake as a 7.4 magnitude but quickly revised it to 7.7.

This is currently the second strongest earthquake of 2017. A 7.9 magnitude quake in Papua New Guinea on Jan. 22 was the strongest so far this year.

Tonight's M 7.7 #Earthquake in Russia is the 2nd strongest in the world this year. So strong it registered on seismographs in SC. pic.twitter.com/MixQprRLWh