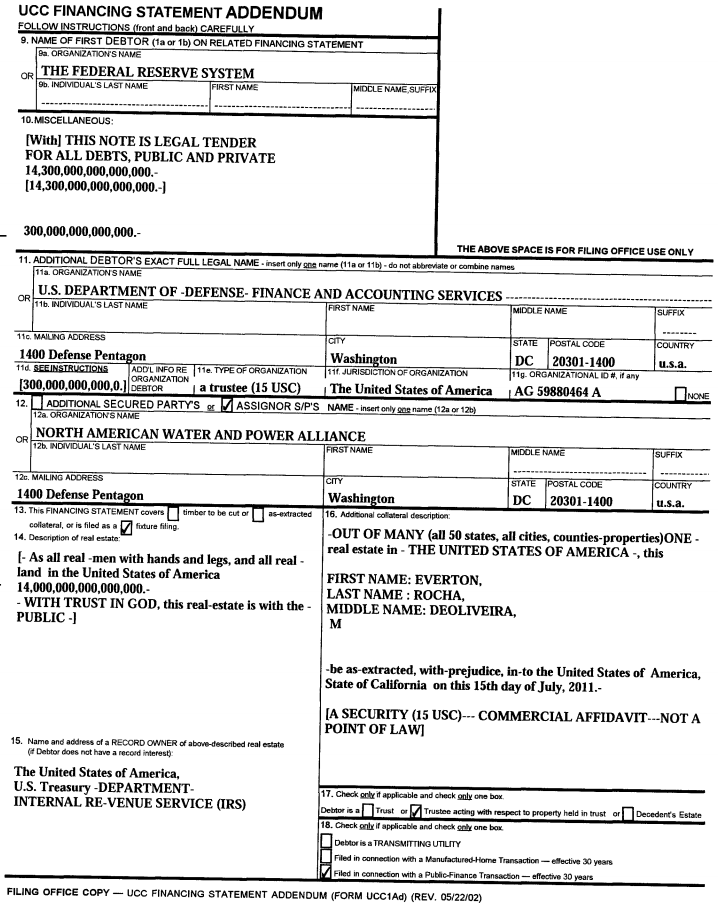 Who established the North American Water and Power Alliance? And why did they really do it?

SOTN Editor’s Note:
The following post was sent to the SOTN Editor via the website email. It presents information that has been out there on the Internet for some time but which has never been satisfactorily explained. The author goes further than anyone else in connecting the dots so that an enormous and unparalleled transaction can be better understood.

However, the real back story to this exceedingly suspicious lien against the USA has yet to be disclosed. SOTN invites any other IRS investigators and/or FED researchers to provide more facts surrounding this highly unusual case.  The case concerns a little-known entity that goes by the name of The North American Water and Power Alliance. As follows: The North American Water and Power Alliance & the Biosphere

Please feel free to forward additional proof of fraud to this email address: SOTNeditor1@gmail.com. All hard evidence will treated with the utmost security and confidentiality.

Thank you,
State of the Nation

N.B. What follows was submitted to SOTN privately by an attorney and former criminal investigator.

An essential fact is: Americans are indentured servants (slaves); they are owned by international bankers through the BANK OF INTERNATIONAL SETTLEMENTS (BIS).

Attached here is a pdf document proving that the IRS claims ownership of all land, real estate, and ‘all real men with hands and legs”. In law, reference to man includes women and children. (See pdf: 001 A PROOF OF LIEN doc 12, page 3, item 13, under’ Description of real estate’. The following link contains the official paperwork that documents this extraordinary transaction concerning the North American Water and Power Alliance.

The proof is in the public records which you can access by going to the Maryland Secretary of State website. Search the business records for the FEDERAL RESERVE SYSTEM and/or entering the filing number, 181425776; scroll for the July 11, 2011 filing event.

This document is a lien against America: all land, all real estate and each and every American. This lien claims a debt value of $14.3 quadrillion; that’s 14,300 trillion dollars. A lien means that until the debt is paid, the IRS owns America, including the people. Actually, the IRS is just the holder in due course for the BANK OF INTERNATIONAL SETTLEMENTS which is located in Basel, Switzerland. As the holder in due course, the IRS retains the right to enforce the claim and debt collection.

Please click on the copy of the original document below dated 7/28/2011 (exactly 6 years ago) to view the lien amount of $14.3 quadrillion. This UCC financing Statement names the “First Debtor” as The Federal Reserve System. The U.S. Department of Defense is listed as the debtor’s exact legal name. The North American Water and Power Alliance is shown as the “Assignor”. How can this possibly be true you may ask?

You need to know that the original Republic of the United States was a compact and alliance of the individual states; each state was recognized as a separate nation under international law. However, when congressional representatives of seven Southern states abandoned their posts in 1861, Congress adjourned and dissolved taking the Constitutional Republic of the United States of America with it. After the Civil War, under the Reconstruction Acts, a new United States corporation, was formed in 1871. This can be confirmed by referring to United States Code, Title 28, Chapter 176 under Federal Debt collection procedures. Section 3002 (15) states that “United States” means:

Note that this definition does not include any reference to a constitutional republic, country, nation, compact of states, geographic area, or people.

The definition only refers to agencies and instrumentalities of the United States corporation.
It gets worse: the UNITED STATES corporation went bankrupt in 1933; this resulted in establishing a bankruptcy trust. The FEDERAL RESERVE SYSTEM is the ‘Public Trust’. All the property of the UNITED STATES, which also applies to ‘states’, are held in trust under bankruptcy law. This property includes all land, all real estate, and even the PEOPLE, and are held as the collateral for the debt owed to international bankers.

Attached below is a pdf document to prove the IRS lien. Also included is information on the NORTH AMERICAN WATER AND POWER ALLIANCE corporation. Please note that their address is the Pentagon; they are listed as an assignor in the pdf document with assets of $300 billion. An assignor is one who gives something to the assignee, which in this instance is the IRS.

*Quite curiously, the attached article states that NORTH AMERICAN WATER AND POWER ALLIANCE has been trying to control the weather.