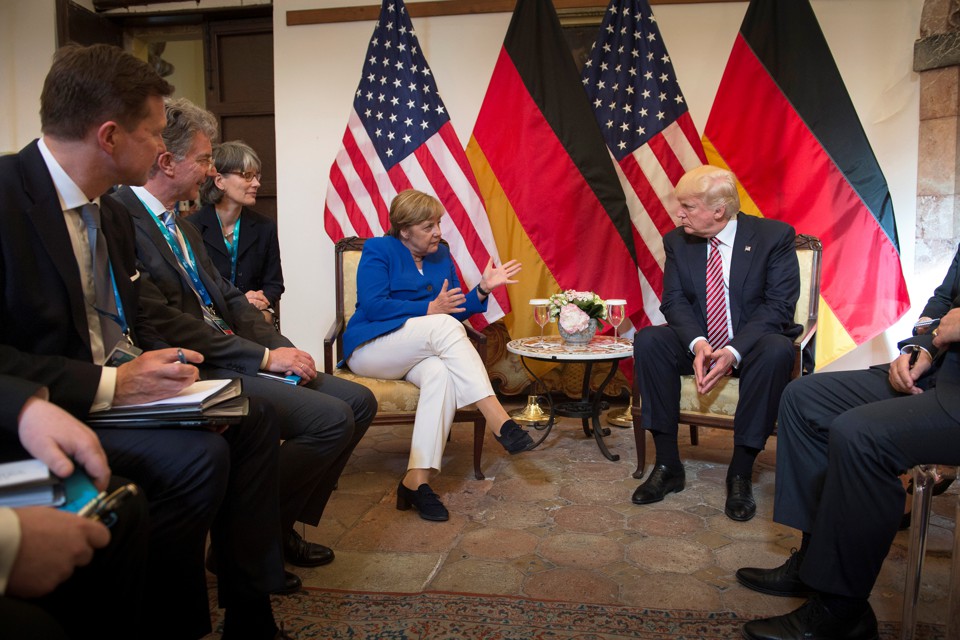 Angela Merkel has served formal notice that she will lead the German wandering away from the American alliance.

Seven years after the end of the Second World War, on the 10th of March 1952, the governments of the United States, the United Kingdom, France, and the newly established Federal Republic of Germany received an astounding note from the Soviet Union.The Soviet Union offered to withdraw the troops that then occupied eastern Germany and to end its rule over the occupied zone. Germany would be reunited under a constitution that allowed the country freedom to choose its own social system. Germany would even be allowed to rebuild its military, and all Germans except those convicted of war crimes would regain their political rights. In return, the Allied troops in western Germany would also be withdrawn—and reunited Germany would be forbidden to join the new NATO alliance.

Historians have long debated whether the note represented a genuine offer or a cynical ploy. (Current consensus: ploy.) There’s no debate about what happened next. Determined to anchor Germany securely in the Western camp of nations, German Chancellor Konrad Adenauer rebuffed the “Stalin note.” West Germany would enter NATO in 1955, build the European Union, and develop as an Atlanticist liberal democracy.

The Soviets did not quit, however. Again and again through the Cold War they would probe for ways to split Germany from the West, and especially from the United States. They probably came closest in the early 1980s, when millions of Germans marched in the streets against NATO nuclear missile deployments. (The 1983 song, “99 Luftballons” is probably now the most enduring memento of that dramatic moment.)

But in the end … it didn’t work. The alliance held. The Soviet bid for dominance collapsed, as did the Soviet Union itself. Germany was reunited on Western terms: liberal and Atlanticist from the Moselle to the Oder. The deft diplomacy of President George H.W. Bush and Brent Scowcroft over-mastered the objections of Moscow—and not just Moscow. “I love Germany so much that I am grateful there are two of them” went a quip usually attributed to the French novelist Francois Mauriac. For many in London and Paris, Margaret Thatcher and Francois Mitterrand very much included, the quip was no joke. Much of the present malfunctioning architecture of the European Union—including the lethal euro currency—originated in French demands for reassurance that reunification would lead to “a European Germany, not a German Europe.”Without the United States, German reunification would never have proceeded so smoothly or rapidly. That assistance is still gratefully remembered in Germany. But gratitude cuts only so much ice in international relations. When the U.S. tried to mobilize the European powers to manage the breakup of Yugoslavia, Germany balked at the risk. But it was the George W. Bush-Gerhard Schroeder split over the Iraq war in 2003 that definitively ended German deference to American leadership.

Since then, Germany has deferred less and less to the United States—and walked more and more its own path. Germans cheered candidate Obama in 2008, but German-U.S. relations if anything sank even lower under President Obama than under President Bush. Merkel ignored Obama’s pleas to reflate the German economy after the financial crisis of 2008 and the euro crisis of 2010. The Snowden revelations—including exaggerated claims that the United States had tapped Merkel’s ubiquitous personal cellphone—poisoned the mood even more deeply. In June 2014, Germany took the unprecedented step of expelling the senior U.S. intelligence officer in Berlin, even announcing the action over Twitter. (Never mind that it soon emerged that German intelligence had itself scooped up a Hillary Clinton phone call.) Here’s a link to an RT story gleefully—but accurately —noting that the percentage of Germans expressing trust in the United States had plunged from 76 percent after Obama’s election to 35 percent by 2014. Sixty percent of Germans characterized Edward Snowden as a hero.

Whoever was elected president in 2016 would face quite a challenge renewing and rebuilding the German relationship. Trump has instead done further damage.Since the war, German politics has been founded on two fundamental commitments: to liberalism at home; to Atlanticism abroad. Only a tiny minority question the first, but a much larger minority doubt the second. Like Americans, the Germans remember the Nazi past. Much more than Americans, the Germans remember that British and American bombers burned the cities of Germany to the ground. Germans have gained voice to speak about their own history—and to express their own emotional distance from partners they no longer need so much as they used to. “We will never be family,” a semi-inebriated German Air Force general once insisted to me at a NATO conference in Tallinn. “Americans, British, Canadians, Australians, New Zealanders: You are family. We will never be.” That feeling is reflected in strategic decisions like the German hesitation to join the “Five Eyes” intelligence-sharing agreement.

Donald Trump is giving permission to U.S.-skeptic elements in Germany.

I offered the following warning in mid-November of last year:

Yet even in the face of all these strains and difficulties, German friends of the United States have retained one clinching argument and decisive asset on their side of the debate: a wide and deep public intuition that people highly critical of the United States were probably animated by extremist and illiberal ideas. So long as the Germans most hostile to the U.S. alliance espoused various shades of fascism and communism, then the mighty German middle would cling determinedly to the U.S. alliance as a bulwark of stability and liberalism.

The election of Donald Trump to the presidency up-ends German political assumptions about the United States, at a time when Germans are already ready to have those assumptions up-ended. …

Ominously, the U.S.-Germany rift coincides with the United Kingdom’s exit from the European Union—an exit that will greatly weaken London’s clout versus Berlin. Britain will need to renegotiate access to the EU market; Germany will have power to approve or refuse. The post-1945 vision of a secure and liberal Germany joined in an intimate partnership to the United States and the United Kingdom will fail. In its place: a Germany more distant from its former English-speaking allies, more vulnerable to an aggressive Russia, more polarized and afflicted by extremism in the wake of Merkel’s welcome of almost 2 million Middle Eastern and North African migrants.

Polls show that German confidence in the United States, already lowered under Obama, has collapsed under Trump to a level barely better than Putin’s Russia. Facing elections in the fall—and reassured that she has gained a congenial partner in France’s President Macron—Merkel has served formal notice that she will lead the German wandering away from the American alliance. In a speech before 2,000 people on Sunday, she declared that Europe cannot at this time rely on the U.S. and the U.K. “The times in which we could completely depend on others are on the way out. I’ve experienced that in the last few days,” she said. “We Europeans truly have to take our fate into our own hands.” Notice that she said “Europeans,” not Germans. Notice too that she did not rule out that Europe might rely on the U.S. and U.K. in the future: The door is not closed. But the old order has passed.

Join those words to Trump’s ostentatious refusal to endorse NATO’s famous Article 5, the guarantee of mutual defense, at the NATO summit, and it’s hard to imagine that the messaging of Trump’s first trip could have been more perfect for Vladimir Putin if he’d written the script himself.There’s an effort now to spin words to present this trip as something less than an utter catastrophe for U.S. interests in Europe. National-Security Adviser H.R. McMaster has insisted that President Trump did indeed affirm Article 5. Compare Trump’s words to those of his predecessors, and you can see for yourself how untrue that is. The Republican chair of the Senate Foreign Relations Committee, Bob Corker, went on record to declare that he could not have been more pleased with the trip. If true, that would reflect poorly on Senator Corker’s judgment. I prefer to think that the statement reflects poorly on his candor.

Here’s what’s really true: Donald Trump is doing damage to the deepest and most broadly agreed foreign-policy interests of the United States. He is doing so while people associated with his campaign are under suspicion of colluding with Vladimir Putin’s spy agencies to bring him to office. The situation is both ugly and dangerous. If it’s to be corrected, all Americans—eminent Republicans like Bob Corker above all—must at least correctly name it for what it is.