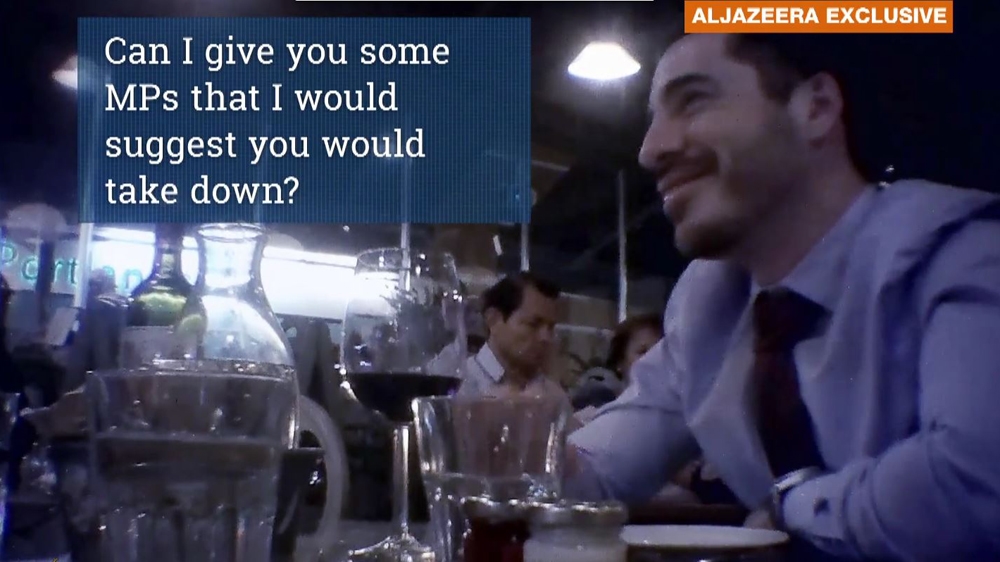 A senior official at the Israeli Embassy in London was secretly filmed discussing with a Conservative staffer how British officials with a pro-Palestinian stance could be “taken down.”

The footage of the controversial conversation was released on Sunday by Al Jazeera, which said it was a preview for a larger four-part expose on Israeli influence on British politics, which would be aired starting next Sunday.

The footage showed a lunchtime discussion between Israeli Embassy official Shai Masot and Maria Strizzolo, who was chief of staff to MP Robert Halfon, the deputy chairman of the Conservative Party at the time the recording happened. The filming was done by an Al Jazeera reporter, who was posing as a pro-Israeli activist, Al Jazeera said.

On the record, Masot is heard asking Halfon whether he could give her the names of some MPs to “take down.” Strizzolo is heard laughing and saying: “Well you know, if you look hard enough I’m sure that there is something that they’re trying to hide.”

They then move on to the topic of “taking down… the deputy foreign minister” or, according to Al Jazeera, Sir Alan Duncan, a state minister under UK Foreign Secretary Boris Johnson. Duncan has been publicly critical of Israeli settlements in the occupied territories.

Strizzolo asked: “You still want to go for it?” Masot ambiguously replied that the British official was still causing problems. Strizzolo then said: “I thought we had, you know, neutralized him just a little bit, no?” to which Masot said: “No.”

The two also discussed Secretary Johnson, who the Israeli official described as “basically good,” but also “an idiot” who became Britain’s top diplomat “without any kind of responsibilities.”

“So technically if something real happened, it won’t be his fault,” he added.

Responding to the report, the Israeli Embassy released a statement in which Ambassador Mark Regev apologized to Duncan and called Masot’s remarks “completely unacceptable.”

The embassy called its staffer a junior employee rather than a diplomat, and said he “will be ending his term of employment with the embassy shortly.”

During the conversation with Strizzolo, Masot described his ambition to become head of the Foreign Affairs department and “the Intelligence Department in Israel.” His business card calls him “a senior political officer,” according to the Guardian.

Strizzolo told the newspaper the quotes were used out of context, and that the conversation was “light, tongue-in-cheek and gossipy.”

“Any suggestion that I, as a civil servant working in education, could ever exert the type of influence you are suggesting is risible,” she said.

The British Foreign Office expressed satisfaction with the apology, saying that it was “clear these comments do not reflect the views of the Embassy or the Government of Israel. The UK has a strong relationship with Israel and we consider the matter closed.”