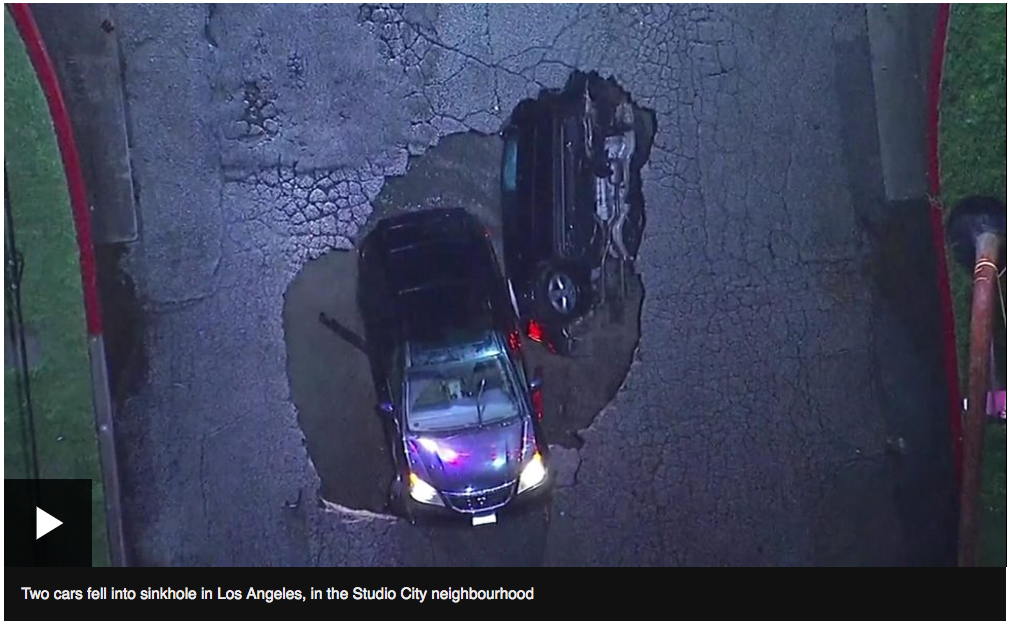 One of California’s strongest storms in years – dubbed a “bombogenesis” or “weather bomb” – has hit the state, killing two, and bringing torrential rain and flash floods.

Hundreds of homes have been evacuated amid fears of mud slides near Los Angeles.

More than 250 flights have been disrupted at Los Angeles International Airport, and major roads have closed.

The weather has also brought car-swallowing sinkholes and power cuts.

The rainstorms spread from the south of the state, around Los Angeles, up to San Francisco.

One man was killed after a tree fell and pulled a power line on to his car in the Sherman Oaks area of Los Angeles. 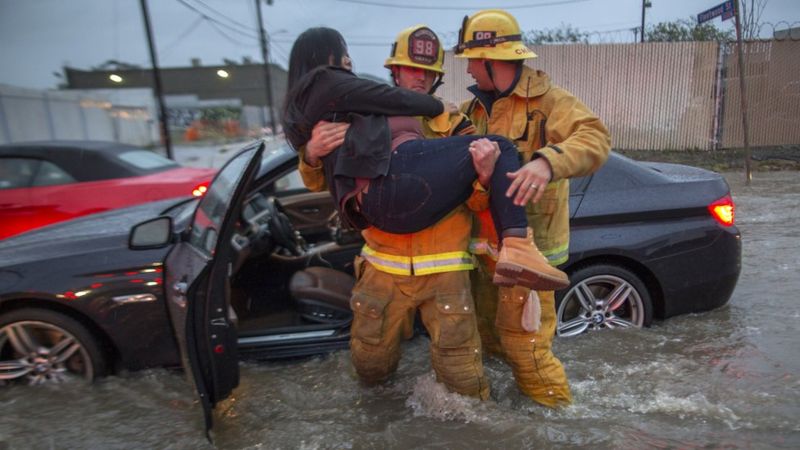 GETTY IMAGES – A firefighter carries a woman from her car after it was caught in street flooding in southern California.

A second person died in a vehicle when it was submerged by a flash flood in the town of Victorville.

Another motorist at the same junction was saved after climbing on to the roof of his car.

Ryan Maue, a meteorologist for WeatherBell Analytics, told the Los Angeles Times that 10 trillion gallons of rain would fall on California in the next week, enough to power Niagara Falls for 154 days. 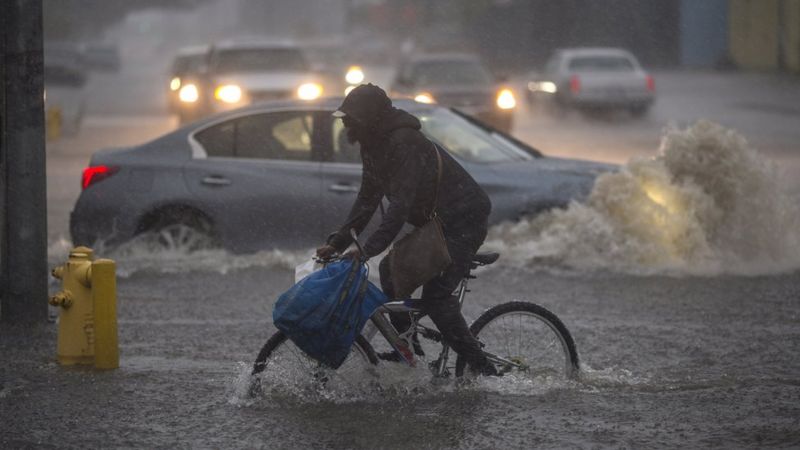 GETTY IMAGES – A man tries to cycle through the flooded streets of Sun Valley, southern California

Two cars fell down a sinkhole in LA neighbourhood Studio City, with the drama of the second one, teetering on the edge and then tumbling down, shown on live television.

Firefighters saved one person from the first car, and the driver got out of the second before it fell. No-one was injured.

Erik Scott from the Los Angeles Fire Department said that the sinkhole rescue was “a very unique and dangerous situation”.

He said the frightened driver in the fallen car was forced to stand on top of her vehicle, underground and amid rushing water, until a ladder could be passed down to her, 10ft (3 metres) below the street.

The Los Angeles Times also spoke of “surreal scenes” with cars trapped by rising waters along freeways 11 and 15. 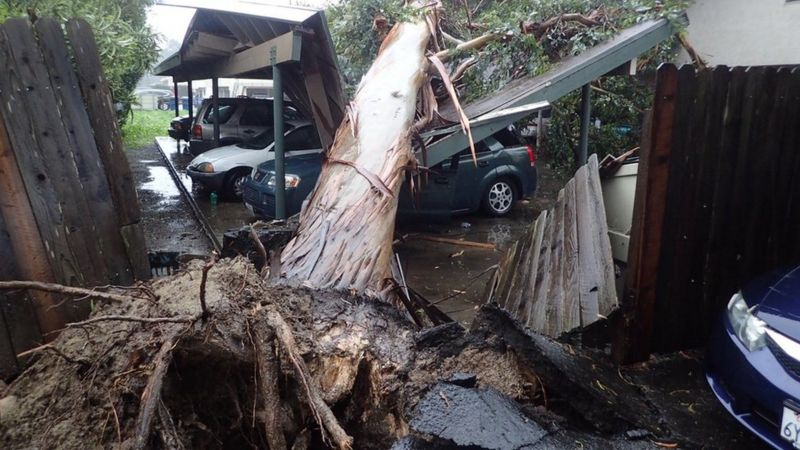 Evacuation orders were issued in the city of Duarte, in the foothills of the San Gabriel Mountains east of Los Angeles, and in parts of Camarillo Springs in Ventura County.

It is feared that areas that have been previously hit by forest fires could be more susceptible to mud slides as there is less vegetation to break the flow of running water.

In Duarte, about 20 miles (32 km) east of Los Angeles, city authorities said they had been door to door to issue mandatory evacuations.

Those who chose to stay were required to sign notifications.

One local, Alberto Moreno, told Reuters news agency that he was staying put. “The neighbours are here so we’re all basically going to help out each other if it comes down to it,” he said, while barricading his home with sandbags. 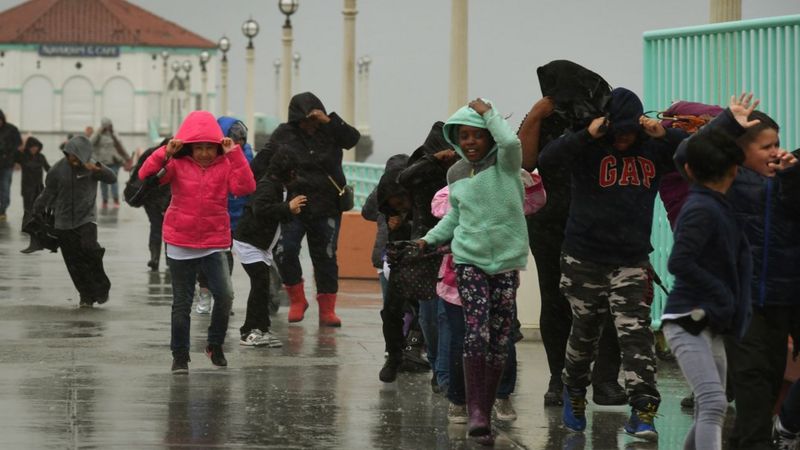 Meteorologists describe the “bombogenesis” as an intense extra-tropical cyclonic low-pressure area, or “a weather bomb”.

“The storm looks to be the strongest storm to hit southwest California this season,” the National Weather Service said.

“It is likely the strongest within the last six years and possibly even as far back as December 2004 or January 1995.” 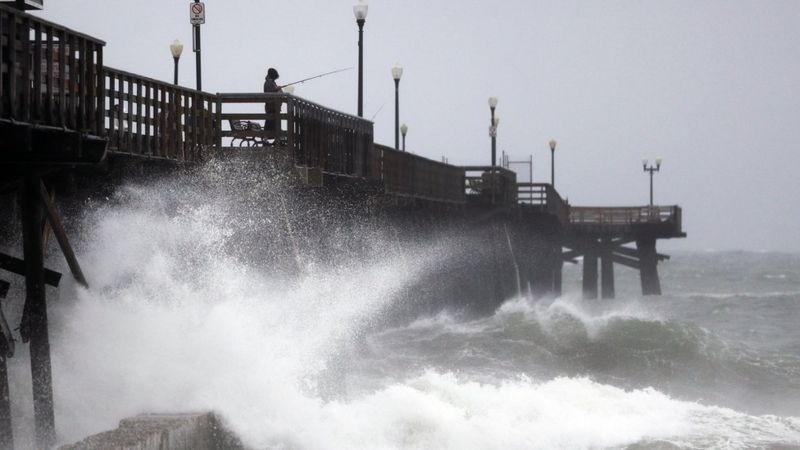 AP – Waves crash against a pier in Seal Beach

After five years of drought, a series of storms have filled state reservoirs.

California’s Sierra Nevada mountain range is also loaded with snow. Runoff from its snowpack normally supplies about a third of the state’s water.

Gusts of 87mph (140km/h) have been reported on the Big Sur scenic coastal highway. 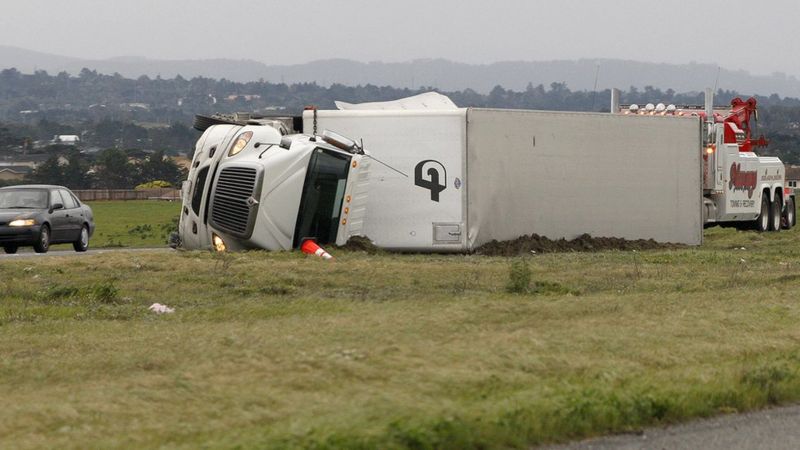 Earlier in the week, heavy rain and melting snow caused fears of flooding at the tallest dam in the country, Oroville Dam, in northern California. More than 180,000 residents were evacuated.