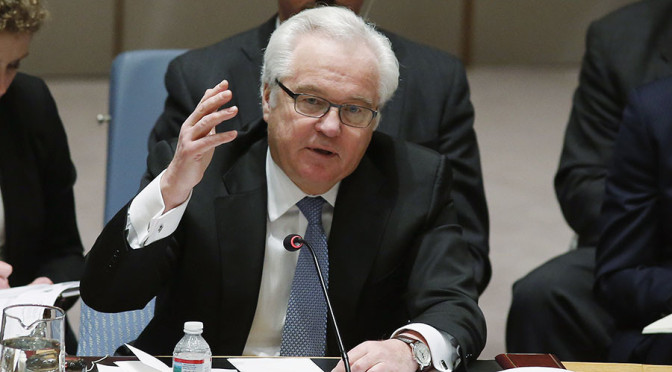 We could have accepted the diplomatic line that the late Russian ambassador to the UN, Vitaly Churkin, who looked to be “in absolute good health,” died after he collapsed at his consulate desk in New York City, if only nobody from the Cabal side said this prior to his “sudden” death…

Senator Lindsey Graham (R-SC) has said that 2017 is going to be “the year of kicking Russia in the ass” as he threatened Moscow with a new round of sanctions over Moscow’s alleged US election interference.

… Graham said he believed Moscow would try to influence the upcoming elections in Europe. “To our German friends, you’re next. To our friends in France, they’re coming after you. And to my friend Mr. Lavrov, I hope you finally suffer some consequences for what you and your regime have been doing to democracies, and 2017 is going to be the year of kicking Russia in the ass in Congress,” he told delegates at the Bayerischer Hof Hotel on Sunday.

For the Khazarian Mafia, Russia has committed many sins against their globalist plans of total hegemonic control under the intelligence arm of the CIA,

… military arm of the Pentagon, the financial center of London and the behind the scenes Bank of International Settlements [BIS],

… all aided with the regular distraction from the Soros-funded Open Society Foundations and the Rothschild-owned mainstream media.

Whenever possible, the same highly organized criminal syndicate sought to extract retribution from the Russians through media demonization and outright assassination of people engaged in counter-propaganda,

… and just a day ago, the “sudden death” of Ambassador to the UN Vitaly Churkin, who had served as a formidable deterrence to the legitimization of more regime changes around the world through the Russian veto at the UN Security Council, should serve as a strong warning to his peer Foreign Minister Sergey Lavrov.

As to the actual weapon used to kill him, a remote cardiac disruptor could certainly serve the purpose. A device that could send a directed electromagnetic signal to disrupt the heart’s normal oscillation, which is actually electrical in nature, can be used to eliminate anybody with an electromagnetically induced “cardiac arrest,” with plausible deniability.

However, ex-KGB agent Vladimir Putin knows this type of a weapon, and its possibility of being used to eliminate his friend, is deeply upsetting him.

‘Still looking for Iraqi WMDs?’ & other most memorable quotes from Vitaly Churkin

On many occasions over the decade that he served as Russia’s ambassador to the UN, Vitaly Churkin has countered attacks by Western diplomats with a pointed turn of phrase. RT looks at six such moments from Churkin’s distinguished career.

The US envoy to the UN, Zalmay Khalilzad, received this response from Churkin on August 29, 2008, after he condemned Russia’s “invasion” of Georgia.

This was Churkin’s reply to UK envoy Matthew Rycroft on February 3, 2017, after Rycroft called Russia’s position on Ukraine an “inversion of reality” and seconded new US Ambassador Nikki Haley’s demand for Russia to “return Crimea” to Ukraine.

“The people of Crimea quite clearly expressed their will in a referendum,” Churkin told Haley, pointing out that the US Constitution begins with the phrase, “We, the people.”

Churkin had this tongue-in-cheek retort for then US ambassador Samantha Power, after she spoke of meeting with the members of “Pussy Riot” on February 6, 2014. The self-described punk-rock activists gained notoriety in Russia and fame in the West after three of their members were arrested for a “performance” at Moscow’s Christ the Savior Cathedral in 2012.

That is how Churkin commented on Power’s emotional speech about the humanitarian situation in Aleppo, where the US-backed rebels were losing a battle to the Russian-backed Syrian Army, on December 13, 2016.

That is how Churkin reacted to a report about the situation in Aleppo by Under-Secretary General for Humanitarian Affairs and Emergency Relief Coordinator Stephen O’Brien, on October 27, 2016.

“Give us one fact, please, or leave this kind of storytelling for the novel you may well write later,” the Russian envoy told O’Brien.

Speaking at the UN General Assembly on May 11, 2016, Churkin called on world leaders to remember the organization’s founding principles.

“One should not seek to expand their sphere of control, as it is happening as result of the unrestrained NATO expansion. One should not strive for military dominance, the way US aims to do by creating the global missile defense system,” he added.

“Instead, we should go back to the origins of sensible political thinking, to the slogan ‘the world is undivided,’ to the understanding that the wish to ensure your own security at the expense of others only undermines security globally.”