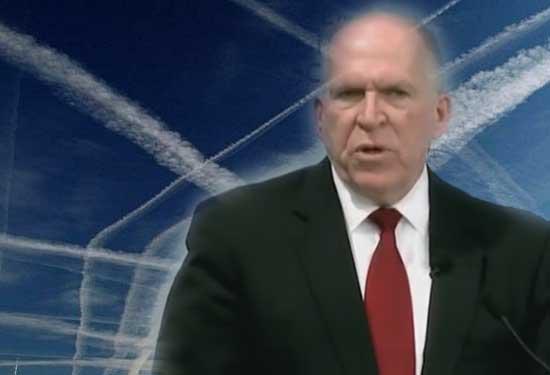 Chemtrails are a favorite topic for “conspiracy theorist”, but are they real?

Many names have been given to the practice of “spraying” the skies with aerosols. Here are a few of the more popular terms used by “conspiracy theorist” :

On June 29, 2016 the Central Intelligence Agency Director, John O. Brennan joined the ranks of conspiracy theorist when he gave a presentation in front of the Council on Foreign Relations (CFR). In his presentation, Mr. Brennan, like all good conspiracy theorist, discussed Geoengineering or Stratospheric Aerosol Injection (SAI), which is a method of seeding the stratosphere with particles that can reflect the sun’s heat, in much the same way that volcanic eruptions do.

In his talk Brennan admits that SAI can alter weather patterns in certain regions of the world, at the expense of other regions. The video can be viewed below. His talk on Geoengineering beings at the 12:00 minute mark.

Reporter James Corbett picked up on the latest government admission of Chemtrails existence and use in his interview today with author Peter Kirby, who’s book is entitled “Chemtrails Exposed : A New Manhattan Project”.

This is not the first admission of the existence and use of Chemtrails. In 2013 NASA Jet Propulsion Labratory’s Chief Systems Engineer, Riley Duren, of the Earth Science & Technology Directorate Jet Propulsion Laboratory, gave a lengthy presentation on Geoengineering. In his discussion he covered :

Concepts for directly and deliberately manipulating Earth’s climate system, collectively referred to as “geoengineering,” have been proposed as contingency responses to global warming. This talk will cover the motivations and risks of geoengineering and what can be done to support informed decision-making.

Few “respected” journalist will touch the topic of Geoengineering, but in 2013 Business Insider writer Kyle Russel did just that in his article, “The CIA Wants To Control The Weather Through ‘Geoengineering’”. In the article Mr. Russel indicated :

This technique has already been attempted on a small scale.

But if you live in the United States, you’ve probably seen chemtrails being undertaken on a very large scale; if not you’ve likely seen images. Here are some I’ve taken from above my own house. The images were taken over a few hours. What started as a beautiful blue sky ended in hazy horror almost blocking the sun.

Another journalist, Bob Yirka, also wrote an article in 2013 entitled, “CIA co-sponsoring geoengineering study to look at reversing global warming options”. But the history of the governments admissions goes back even further. In 2008 the CFR themselves published the, “Unilateral Geoengineering : Non-technical Briefing Notes for a Workshop”. In this document they state :

There are a variety of strategies, such as injecting light-reflecting particles into the
stratosphere, that might be used to modify the Earth’s atmosphere-ocean system in an
attempt to slow or reverse global warming.

The Facts Are In

So it’s becoming quite obvious, to those who are willing to pay attention, that Geoengineering, Chemtrails or whatever you wish to call it is quite real.

But just how far back does the technology go?

For that we need to investigate the patents that date back to the 1920′s. Just to give you a glimpse of how real this technology is, I have included a rather extensive list below with links along with some other credible resources.

Now we need to get to the bottom of Geoengineering’s purpose. Currently Global Warming (aka Climate Change) is being given as the reason for their widespread use. However, if you call NASA they may tell you a different story about using Chemtrails to test wind patterns at different levels, and online bloggers and vloggers will give you an entirely different view of their true purpose. In other words, we don’t really know.

What we do know for sure is that Chemtrails are real.

3601312 – August 24, 1971 – Methods of Increasing The Likelihood oF Precipatation By The Artificial Introduction Of Sea Water Vapor Into The Atmosphere Winward Of An Air Lift Region

USRE29142 – This patent is a reissue of patent US3630950 – Combustible compositions for generating aerosols, particularly suitable for cloud modification and weather control and aerosolization process

3882393 – May 6, 1975 – Communications System Utilizing Modulation of The Characteristic Polarization of The Ionosphere

3896993 – July 29, 1975 – Process For Local Modification of Fog And Clouds For Triggering Their Precipitation And For Hindering The Development of Hail Producing Clouds

4042196 – August 16, 1977 – Method and apparatus for triggering a substantial change in earth characteristics and measuring earth changes

4362271 – December 7, 1982 – Procedure for the artificial modification of atmospheric precipitation as well as compounds with a dimethyl sulfoxide base for use in carrying out said procedure

4686605 – August 11, 1987 – Method and apparatus for altering a region in the earth’s atmosphere, ionosphere, and/or magnetosphere

5038664 – August 13, 1991 – Method for producing a shell of relativistic particles at an altitude above the earths surface

5041760 – August 20, 1991 – Method and apparatus for generating and utilizing a compound plasma configuration

5245290 – September 14, 1993 – Device for determining the size and charge of colloidal particles by measuring electroacoustic effect

5486900 – January 23, 1996 – Measuring device for amount of charge of toner and image forming apparatus having the measuring device

5762298 – June 9, 1998 – Use of artificial satellites in earth orbits adaptively to modify the effect that solar radiation would otherwise have on earth’s weather

6025402 – February 15, 2000 – Chemical composition for effectuating a reduction of visibility obscuration, and a

detoxifixation of fumes and chemical fogs in spaces of fire origin

Restoring the Quality of our Environment by The President’s Science Advisory Committee : http://dge.stanford.edu/labs/caldeiralab/Caldeira%20downloads/PSAC,%201965,%20Restoring%20the%20Quality%20of%20Our%20Environment.pdf