Russian sappers sweep Aleppo for mines, discovering shells made in US, Germany (VIDEO) 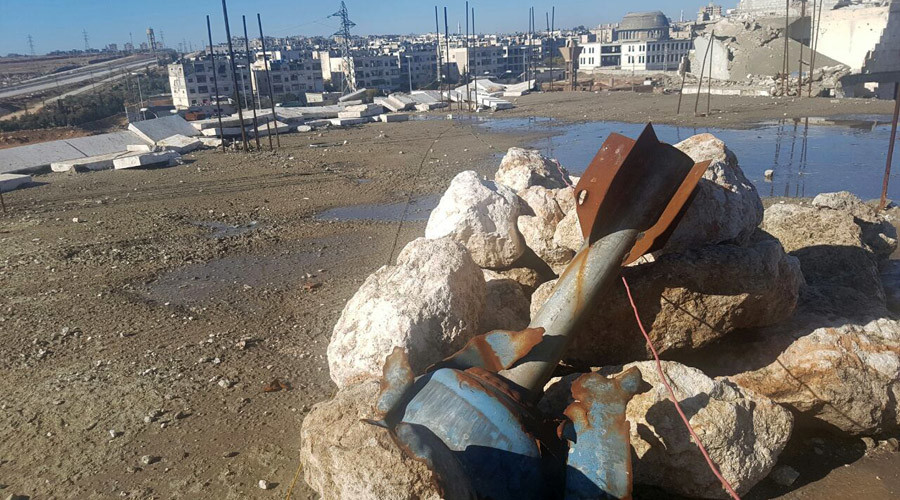 Russian sappers sweep Aleppo for mines, discovering shells made in US, Germany (VIDEO)

Russian bomb disposal teams are continuing to sweep schools and mosques of Aleppo for booby-traps, mines and munitions after they were wrested from rebel control. Recovered explosives come from various parts of the world, including the US and Germany.

Since starting their mine-swiping mission in the Syrian city three weeks ago, the sappers have cleared 966 hectares, the Russian Syrian Reconciliation Center reported on Wednesday. They reported 2,149 building in and near Aleppo as safe, including 44 schools, 38 mosques, 10 medical facilities and other crucial civilian infrastructure. They also swept 350km of roads in the area for mines, the report said.

The teams discovered and defused some 14,700 dangerous items, including 6,700 IEDs. The munitions discovered in stockpiles left behind by various armed groups ranged from small arms rounds and hand grenades all the way up to rockets meant for multiple-rocket launchers.

Footage of the ongoing demining operation released by the Russian Defense Ministry showed crates full of various munitions; some of them marked “Produced in Yugoslavia by Ordnance Corps United States Army.”

_
“The munitions we found were German, American, Bulgarian… The amount they had was somewhat disconcerting,”
Maj. Ivan Gromov, a bomb disposal squad leader said.

The Russian military in Aleppo are assisting with restoring normal life in the city after four years of hostilities. In addition to disposing of explosives, they help with deliveries of humanitarian aid and restoring utilities. A Russian military police unit was deployed to Aleppo to preserve order and prevent possible abuses.

Militants opposing the Syrian government were forced to leave eastern Aleppo after Damascus conducted a successful offensive operation in the city last month. The evacuation of rebel fighters and their civilian supporters was meant to spare lives and was conducted with the help of international humanitarian organizations. This ended constant fighting in the city, which was divided into government-held and rebel-held parts for years.