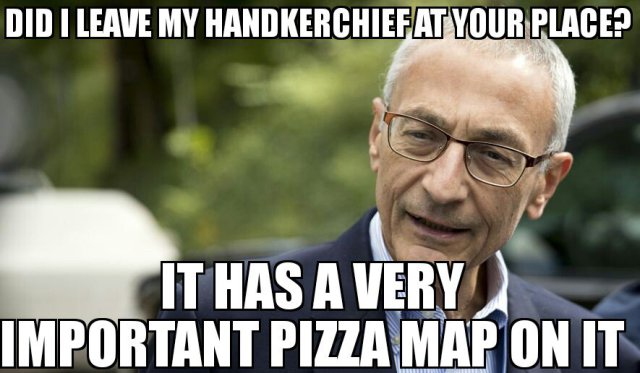 No one has ever seen anything like it in the history of Mainstream Media (MSM) fabrications.

Three of the largest MSM news outlets in the world have come out strongly and run stories on the Comet Pizza Restaurant in Washington, D.C. that many investigative journalists believe is connected to the largest and most powerful pedophilia ring on the planet.

There can be only one reason why The New York Times, The Washington Post, and now the BBC, have used their mammoth media platforms to support a pizza parlor owner whose extremely salacious and suspicious  behavior puts him in the league of ….? ? ?

Why would the biggest MSM giants in the land risk their reputations in support of an outrageously gay pizza joint owner (see his many photos and pics) whose Instagram account has the following posted on it?

There is something VERY wrong indeed with this picture (both the preceding one and the BIG one).  And that something has to do with PIZZAGATE, a global child murder, child sacrifice, child trafficking, and child sexual abuse crime syndicate that has been operating in plain sight for decades throughout Washington, D.C.

Because this crime spree involves some of the most powerful people within the Beltway, as well as other centers of great political influence around the globe, it’s now clear the MSM will do everything in their power to kill the PIZZAGATE story.

Here are just 3 examples of their attempts to do just that.

You know the elites are getting extremely nervous when they run stories like these on their three largest news platforms, particularly when such reports draw huge attention to the underlying pedophilia rings.  Hence, these preceding stories must be seen as a last-ditch effort to kill the Alt Media PIZZAGATE narrative.  Especially in the minds of those who are still addicted to the MSM fake news, as in real fake news, are the media giants trying to implant a false narrative. It was always quite inconceivable in the first place that Comet Ping Pong Pizza Restaurant owner Jimmy Alefantis (aka “jimmycomet”) would be written up as the 49th most powerful man in the nation’s capital.  Oh, really?!  In a city overflowing with the world’s most powerful politicians and power-players, power-brokers and power-mongers, how does a pizza parlor owner rank so high?!?!

Why is a pizza joint owner named James Alefantis listed as the 49th most powerful man in Washington DC?

Then there is the phonetic meaning of Alefantis’ name in French.  It can be no coincidence that his name means “I love children”.  His middle name is Achilles, which is even more telling in that it reflects that his “love of children” is his Achilles’ heel.

Now we come to the really crazy stuff that appears(ed) in the public domain regarding Comet Ping Pong Pizza and Jimmy Alefantis.  It seems that the blatantly gay Alefantis really loves to strut his stuff, and especially his sexual peccadilloes.  He did this especially by posting away on Instagram and his business blog highly offensive photos and pics that reflect his personal preferences and taste in ‘artwork’.  As follows: Now that the reader (actually viewer) has been sufficiently shocked by such scurrilous content, the real $64,000 question here is: Why have the loudest organs in the MSM gone out of their way to support such an unsavory character?

There can be only one answer to this question.  And it has to do with what he really represents to the D.C. power structure.  That something is big…very, very BIG!  Especially when the WashPo Editorial Board pens a piece that essentially exposes themselves as a zealous pervert protector.  Let’s face it: You really can’t make this stuff up!

Are TPTB getting ready to do something BIG?

There is definitely another angle on this explosive PIZZAGATE story that very nicely aligns with the narrative that saw the siege and attack on the Waco Compound of David Koresh.  Once PIZZAGATE broke, they, and everyone else knows, that there is no putting this genie back in the bottle.  In fact it only continues to get bigger by the day.  Therefore it does appear that TPTB will execute a false flag op that kills the PIZZAGATE golden goose that has laid so many eggs of truth about how the world is really run.  The following video offers an excellent portrayal of what they might try to pull off Waco-style.

This type of agenda may well explain why they are staggering articles throughout the MSM in order to prepare the American people for something very BIG.   Without some sort of conditioning and pretext TPTB simply cannot justify shutting down the Internet.  That may sound like hyperbole, but that is exactly what they want to do to the Alt Media side. At the very least the media controllers are desperate to take away access to all the social network utilities.  Once a PIZZAGATE article gets on Facebook or Twitter, YouTube or Instagram, they viralize quite quickly,  Of course, that must be stopped before too many stumble on such an inconvenient truth.

Clearly the elites who are either into PIZZAGATE, controlled by PIZZAGATE, or are the controllers of the PIZZAGATE psyop have a very strong vested interest to shut down the whole global citizen’s investigation.  They will try to do that some way, somehow in the not-too-distant future.  Otherwise, the entire Global Control Matrix will be put at great risk.  So many national governments worldwide are controlled by their respective PIZZAGATES, that the ruling elites feel that they have no choice but to terminate all such free speech on the net. What else is going on here?

It ought to be obvious to everyone by now that PIZZAGATE has provided TPTB with a false pretext to eliminate the now pervasive and increasing  power of the Alt Media.  After all, it was only by the pervasive influence of the Alt Media that Donald Trump even got elected. Now that’s as powerful as it gets.  Hence, the elites are feeling very threatened, as they should be.

There is perhaps no other chink in their armor that will allow the global structure to be taken down like PIZZAGATE … because of what it’s really all about.  For it is the children who have been terribly abused and exploited, sacrificed and dissected, tortured and murdered.  Such egregious criminal conduct can only be responded to with capital punishment.  The crimes are simply too many and too heinous not to be dealt with swiftly and severely.

Now we know why the MSM is so determined to label everything that comes out of Alt Media as “fake news”.  They really have no choice in spite of the fact that all the MSM does is lie and prevaricate about everything, all the time.  The elites have always been quite predictable of accusing their challengers of committing the very same crimes that they themselves have committed since time immemorial.

PIZZAGATE will be their undoing

The elites have failed to realize that, from this point forward, they really can do nothing right where it concerns the rapidly developing PIZZAGATE investigation.  Time clearly is on our side; as it is working against TPTB every day that goes by.  Only with the passage of time will more witnesses begin to step forward who have been the victims of those who have implemented the PIZZAGATE program over the past few decades.  This is the way that Washington, D.C. has been locked down over the past century, and why nobody ever seems to leave the reservation.

Well, with the World Wide Web casting its net (aka Internet) around the planet, there are infinite opportunities for the victimized to step forward and plead their case in the forum of public interchange.  There are now so many excellent venues available and high volume channels functioning that every witness can pick and choose.  This is why PIZZAGATE will eventually take down the ruling cabal.  They will be prosecuted in the domain of public opinion, completely outside of the completely corrupt court system that has always protected them.

The other quite unfortunate component of the worldwide PIZZAGATE investigation –for TPTB, that is — is that they are damned if they do, and damned if they don’t.  You know how when a horrible crime is committed everyone wants to get as far away from it as possible.  In this case the key political criminals on the world stage — Hillary and Bill Clinton, Barack and Michelle Obama, Joe Biden and Nancy Pelosi, John and Tony Podesta, James Comey and Loretta Lynch et al. can’t get away from PIZZAGATE.  It sticks to them all like flies on a cow patty.

In light of the foregoing predicament, if TPTB use the MSM to blow it all up (the PIZZAGATE citizen’s investigation), it will all just come right back to them.  If they try to completely ignore it, it will eventually overwhelm them; first as a whisper campaign, then as a full-blown Alt Media screamfest.  No matter what they do or don’t do, they’re toast.  After all, some of the 50 states still administer electrocution by way of the electric chair.

What states still use the electric chair? Now the reader understands why PIZZAGATE is so HUGE!   It possesses all the elements for a neatly controlled demolition of the Mainstream Media by Alt Media, of the U.S. Federal Government by the American People, and of the World Shadow Government by the Global Village. Yes, PIZZAGATE is so radioactive for the globalists who rule the planet that it will eventually consume them to the point of extinction.  The planetary civilization has had enough of their criminally insane leadership and depraved control mechanisms.

It’s very important to be aware that James Alefantis’ Comet Ping Pong Pizza is frequently advertised as a FAMILY pizza restaurant.  What follows is just one poster from Sasha Lord, the individual who books the music for Comet. She usually puts “All Ages” on these promotional pieces.  See for yourself the artwork that is presented to children at: Comet Ping Pong’s Sasha Lord Presents…? ? ?