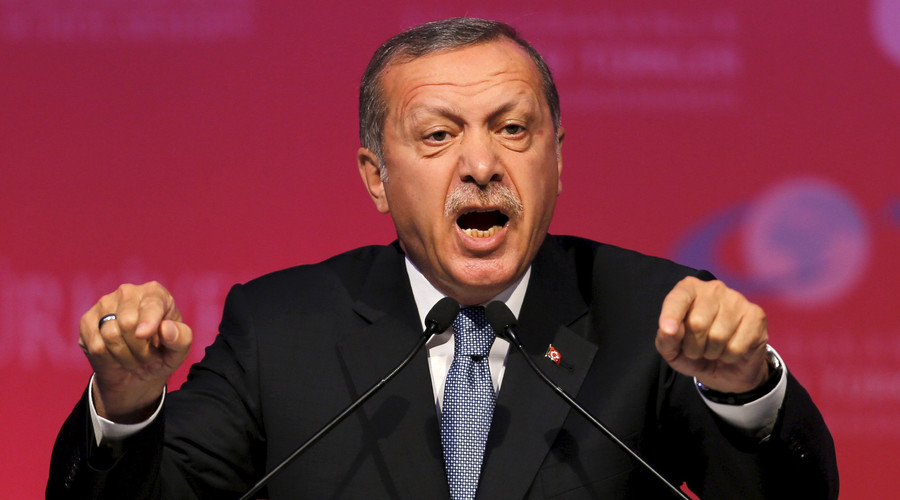 President Erdoğan Had Foreknowledge and Let It Happen On Purpose

There has been much uninformed speculation and many planted rumors about the coup in Turkey.

Many of the rumors have been disseminated by Western intelligence agencies via the mainstream media (MSM).  Russia, on the other hand, has been revealing the true back story through strategic leaks of highly classified information.

Given the boldly treacherous behavior of Turkey’s President Recep Tayyip Erdoğan, it’s not surprising that the leadership of NATO and the Anglo-American Axis (AAA) would try to get rid of him.  It’s actually a wonder that they permitted him to stay in power this long in view of how he categorically implicated the AAA military powers in their collaboration with ISIS terrorism and war-making.

The Most Likely Scenario

While Erdoğan is full of blind ambition which has terribly clouded his judgment, he is also a consummate political survivor.  His various terms in high office stand as a testament to his powers of self-preservation and sharp political instincts.  For instance, his intuition about receiving the immediate backing of the people of Turkey is what actually reversed the tide of the coup.

Therefore, the most likely scenario here, which has now been backed up with volumes of evidence, is that this coup was a MIHOP, LIHOP, and CIAOP.

First,  Erdoğan knew full well that a coup has been in the planning stages for many years. Not only has he arrested many high-ranking military officers and judges over the years, he has also purged the government of many traitors, as he calls them.  Therefore, he has countless enemies all over Turkey.

Erdoğan’s biggest enemy used to be a friend who is now holed up in rural Pennsylvania.  The preacher and religious scholar –Fethullah Gülen — is perhaps his greatest nemesis, and one that the CIA has used to foment revolutionary fervor among his devotees in Turkey.  There is now plenty of evidence which shows that Gülen has been a major CIA asset being used to destabilize Turkey whenever it suits the Zio-Anglo-American power structure.

Given the ongoing plot to remove Erdoğan from office, it was only a matter of time before it was sprung into action.  After all, petty tyrants like Erdoğan only serve at the pleasure of AAA.  Because Turkey is the only meaningful defense of the southeastern flank of the NATO military bloc, who leads Turkey is of great importance.  And when they fall out of favor, it’s just a matter of time before they are deposed.

Why the timing of the coup is a dead giveaway.

The crucial trigger for this coup was the very recent reconciliation between President Putin and President Erdoğan.  Not only was there an apology issued by Turkey for the shoot-down of the Russian military jet and death of two soldiers, Putin deigned to re-establish full trade relations with Turkey.  This was simply too much for the AAA leadership to take.  After all, it was NATO that demanded the shoot-down in the first place.

Once that defining event took place, the C.I.A., MI6 and MOSSAD simply pressed the button on a coup execution plan that has been on the shelf for years, all with the help of Agent Gülen, of course.  As a former Islamic imam, he knows just how to fire up the troops to galvanize a coup d’état, even if he wasn’t present himself.

The other crucial point about timing is that Erdoğan had alienated just about every major player in the European Union (EU), both organization and individual leaders.  As a matter of documented fact, the MSM is replete with news reports about how offended the negotiators where it concerned the engineered and catastrophic immigration crisis.  Everyone knew that  Erdoğan was well aware that he was in the position of strength.  He could turn the immigrant pipeline valve on or off anytime he wanted to.  And, he was extremely bold about using that leverage anytime it served his narrow self-interest and cynical purposes.

So it’s clear that the EU, NATO, AAA all wanted Erdoğan gone … yesterday!  What is surprising then is that they tolerated a notorious co-conspirator with the Islamic State for as long as they did.  The enormous amount of proven war profiteering with ISIL, along with the human trafficking from the war refugee crisis also put Erdoğan on the wrong side of the United Nations and a whole host of NGOs who have been closely monitoring the ongoing Syrian Holocaust.

Erdoğan’s response to what he knew was going on

In light of so many plots and sub-plots being hatched against him by the day, Erdoğan knew that he could not stop a CIA-coordinated coup.  Because of the enormous dividends that it would pay out, he figured out that a LIHOP approach would enable him to identify his enemies in the military and judiciary.  He actually had lists of suspected individuals vetted and drawn up ready to be fired in the event of an attempted coup.

The whole world has seen what the aftermath has brought to Turkey.  Thousands have been arrested, thousands have been fired from their jobs; others have been suspended from influential positions and powerful organizations throughout Turkish civil society.

Such a sea change so quickly after the coup could only have been orchestrated with an extremely detailed counter-coup implementation plan in the works.  For this reason, Erdoğan may even have participated in this coup as a MIHOP.  Only if he was that confident that such an attempt would ultimately fail did he take the risk to proceed on the basis of a  MIHOP, however.  In any case this was undoubtedly a LIHOP.

That the Incirlik Air Base is still without power is also quite significant.  Also, the top Turk commander there was arrested.  Clearly, the US is not happy with this state of affairs.  Nor is the Obama Administration happy about the accusations that the USA is harboring the primary coup plotter Fethullah Gülen.   Erdoğan is continuing to press the matter in such a way that it is clear he will not back down until the CIA asset is extradited to Turkey.

The very fact that 14 naval ships are still missing along with helicopters is another indication that a very real coup was staged.  Could Erdoğan be hiding them to give credence to his story?  Quite doubtful!  That his special forces are missing is also quite compelling, especially those who have sought refuge in Greece.

There are so many aspects to this typical CIA black operation that it is implausible that foreign intelligence serves were not directly involved.  It appears that they simply screwed up—BIG TIME! Therefore, it was quite likely a CIAOP as well.  Nothing of this magnitude ever goes down anywhere on planet Earth without the C.I.A. being in the driver’s seat in collusion with MI6 and MOSSAD.  That’s just the way the world works in 2016, and it can no longer be denied. Especially when things like the following take place has a message been sent to someone in the Turkish Government … by the Western intelligence agencies.

Top Turkish Official In Charge Of Campaign Against ISIS Found Dead, Shot In The Neck

Hence, this dramatic and captivating coup in Turkey was quite likely a MIHOP, LIHOP and CIAOP.   In the end it will be Erdoğan who has outflanked them all, quite an achievement in this day and age.  Nonetheless, the CIA always knows that there will be another day.

The people who have prepared this putsch are absolutely not Kemalists. This upheaval was purely pro-American. Its core was the Gulen movement, which works for the CIA. Of course, pro-American officers and generals tried to organize a revolution. But it was supported by a minority of the army. They had no chance of success, because the majority has objected to any overturn. Another interesting tidbit: some Russian experts declared that this cataclysm has been planned as a response to Erdogan’s domestic policy, which does not correspond to founding President Ataturk’s principles. That is not accurate. This coup d’état was against Kemalists, and Kemalist officers didn’t participate in any form. Attempts to discredit  Kemalists is in the interests of the CIA and organizers of the upheaval. Thus, they provide cover for Gulen followers and try to rescue pro-American officers.

This coup had been planned at the Incirlik Air Base which is used by the American military. On the grounds of this base, the pro-coup generals had twelve conversations with American generals. It is quite clear that America is the puppet master of the putsch. Another remarkable fact is that two pilots, who had brought down the Russian SU-24, also participated in the coups d’état. This coup was a reaction to the increasing likelihood of a rapprochement between Russia and Turkey. Also, the Turkish diplomatic overtures towards Syria, the Caucasus, and the Middle East have caused panic within the US establishment.

The coup was not supported by the majority of military and civilians in the country. This is because it was not just against the president, but against the sovereignty of the country and its independent policy. Therefore, all Kemalists and all of the public have opposed this coup.
As for the capacity of the Turkish military, all of these events will have a positive effect. The army will be released from pro-Atlantic elements, who have insensibly inhibited our struggle with terrorists. Besides this, the course towards rapprochement with Russia will now accelerate, and the whole foreign policy of Turkey will begin to change much more quickly.
(Source: THE COUP D’ÉTAT WAS AGAINST KEMALISTS)