TMR Editor’s Note:
There is definitely something going on at Yellowstone as the spate of recent articles don’t lie.  Photos don’t lie either.  The two links below each have pictures of a HUGE earth crack in Wyoming which is being caused by something.

Here’s another indication that Mother Earth is really rocking and rolling for some reason or other.

Major earth changes like these are always a product of cause and effect. Hence, the $64,000 question is: “What is the real cause that the USGS is not telling us?” 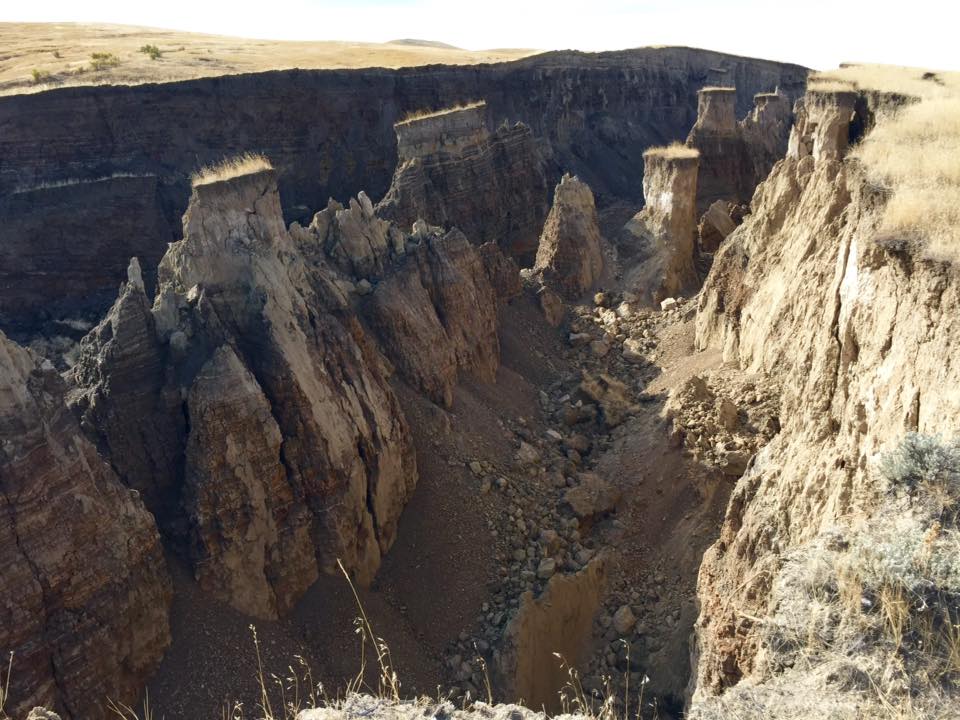 The immense crack, which appears to split a hilltop in half, was discovered by startled backcountry hunters.

The crack appears like a miniature Grand Canyon up close. (Photo: Randy Becker/Facebook)

A dramatic crack has suddenly formed in the foothills of Wyoming‘s Bighorn Mountains that measures an impressive 750 yards long and 50 yards wide. It was discovered recently by surprised backcountry hunters who travel frequently to the area in search of game.

First reported by SNS Outfitter & Guides, a hunting company, on their Facebook page, the mammoth chasm appeared over the course of just a couple of weeks. It’s an impressive example of just how quickly very large geological events can occur under the right conditions.

“Everyone here is calling it ‘the gash.’ It’s a really incredible sight,” wrote SNS on the group’s Facebook page.

PHOTOS TO AMAZE: 13 of the most bizarre lakes in the world

“An awesome example of how our earth is not as stable as you might think. Awesome forces at work here to move this much dirt!!” added Randy Becker, one of the hunters to stumble upon “the gash.” Becker shared a number of stunning photographs of the crack to his own Facebook page.

A shot taken from a distance and posted at SNS gives some perspective about just how wide and how deep the crack is:

“The Gash” seen from a distance. (Photo: SNS Outfitter & Guides/Facebook)

Contrary to some sensational claims swirling about on social media, the crack is not an opening to the underworld or a sign that Yellowstone is about to erupt. The processes that created the crack are not even all that mysterious.

SNS is reporting that an engineer gave a more rational explanation for how the crack formed: “Apparently, a wet spring lubricated across a cap rock. Then, a small spring on either side caused the bottom to slide out. He estimated 15 to 20 million yards of movement.”

Though the speed with which the large crack formed might seem earth-shattering, these kinds of landslides are not that uncommon in the area on a smaller scale. This one just happened to be especially voluminous.