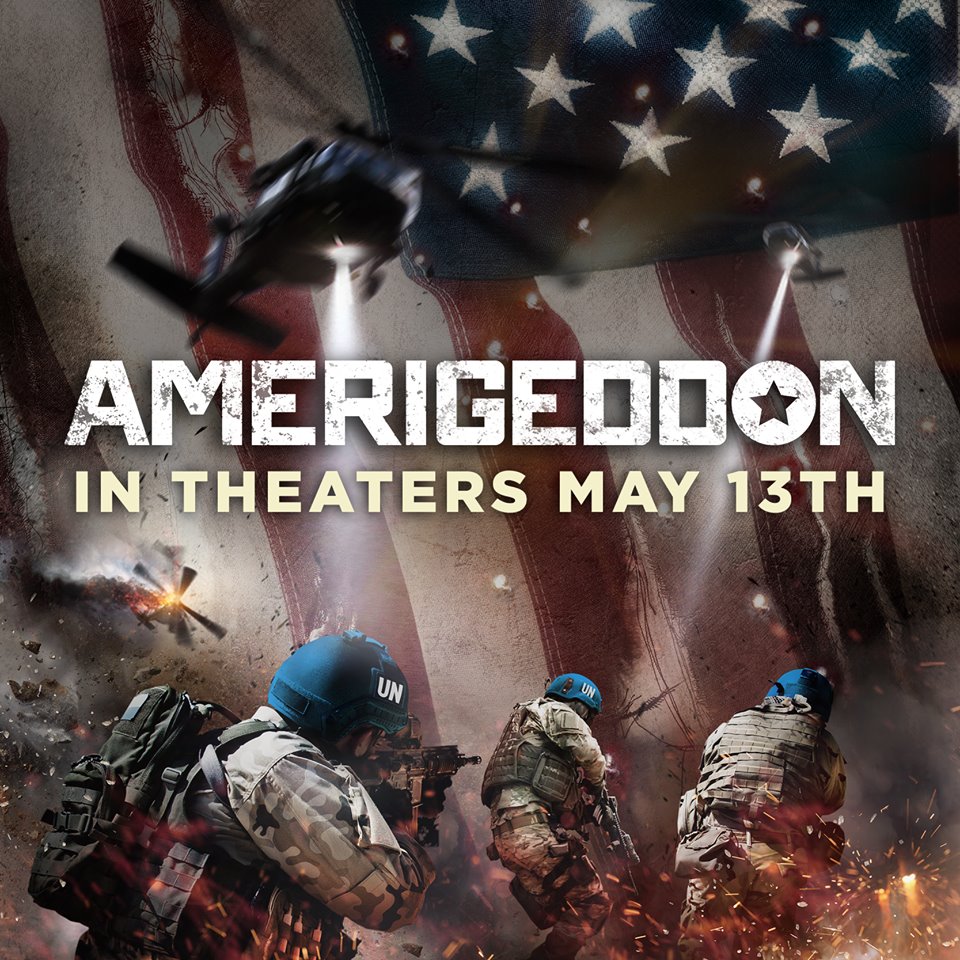 ‘3 Days Away From Absolute Chaos’

This Is The Movie Hollywood Banned

A Dire Wake Up Call For America’ By Stefan Stanford – All News Pipeline – Live Free Or Die

In less than 2 weeks, a dire warning and wake up call of what our future might look like will be hitting the big screen with the release of a very realistic but apocalyptic look at what America could look like any day now in “Amerigeddon The Movie”. Coming out on May 13th, the movie looks at a post-EMP America after terrorists tied to the United Nations and the ‘New World Order’ government now in America sends our Republic back to the dark ages with a false flag attack that takes down our electrical grid, an attack that experts warn in very real-life could quickly lead to the ‘elimination’ of 90% of Americans who are now alive once the grid is fried.

In the videos below we learn why Hollywood has banned this movie and why America is, quite literally, only ‘3 days away from absolute chaos’ at any period of time as our entire system is completely dependent upon the electrical grid. Imagine it suddenly, and without warning, going down and not coming back up…not tomorrow…not next week…not next month…maybe not until next year or later. If that were to happen, how long could you survive?

Back in February, Susan Duclos republished a story on ANP featuring Steve Quayle and Gary Heavin, the writer and producer of “Amerigeddon The Movie,” which was originally published by the Hagmann and Hagmann Report. In their story we were told that “Amerigeddon” is clearly the next signpost ahead on the road we’re all traveling while we were asked to ponder this thought.:

Those of us who instinctively know that things are not as they appear to be have run through the various scenarios: nuclear war, economic meltdown, civil war… the possibilities are endless. And, many have prepared for such possibilities. But what if the scenario turns out much worse than even you expected? Imagine the worst of all scenarios combined, a complete takedown of our power grid. What then?

All News Pipeline reached out to “Amerigeddon the Movie” yesterday and received a response back from them on why this movie is so extremely important in this day and age we live in with the very sovereignty of America in danger from dark forces who like to keep hidden within. We thank them for taking the time to get back to us; we received a quote from Mike Norris, the Director of “Amerigeddon The Movie” and the son of legendary actor Chuck Norris.:

“My family has long been involved in protecting the rights of Americans. We are concerned about the future and and see this film as a call to action. We urge people to join us in theaters and show Hollywood and politicians that true patriots will fight for their rights and want to see their values represented on-screen.” In the very interesting new first video below, Gary Heavin, the producer and writer of Amerigeddon joins the Jim Bakker Show to talk with Bakker’s audience about Ted Cruz and his unarguable ties to the ‘New World Order’ globalists. According to Heavin in this video, Cruz should be considered to be on the same ‘enemies of America’ list that Hillary Clinton, Barack Obama, and all of the other globalists who are now diligently working to destroy our country’s sovereignty and ‘singing the false song of globalism’ are on.

In the 2nd video, Heavin joins SkyWatch TV to talk with us about the movie Amerigeddon and why we’re only ‘3 days away from absolute chaos’ with a plot summary described by IMDb as: A dire warning of a wake up call of what might be our future when a globalist terrorist organization aligned with the United Nations disables the United States power grid and institutes Martial Law. It will take a dedicated family of patriots armed with strong survival skills and the remains of the Second Amendment to save America and reclaim its freedom. Directed by Norris, the son of legendary martial artist and WND contributor Chuck Norris, “AmeriGEDDON” cuts deep and as has been reported time and time again on ANP, America is literally just minutes away from an EMP attack upon us at any time as two North Korean satellite’s fly over us every day and night. Kim Jong-un would also likely be the perfect ‘false flag patsy’ to be used by the NWO in one simple attack that would quickly send America back to the ‘dark ages’.

For those who don’t know about the background of Gary Heavin, he was also the Texas-based owner of the huge worldwide fitness chain “Curves” along with his wife who’ll you’ll also meet in this first video. Heavin is also a Christian and shares with us his background and why Hollywood has turned against him for expressing his faith. In this day and age we live in, its clear that Americans owe great thanks to people such as Heavin and Norris for having the courage to put out this movie in a time where ‘enemies of the NWO’ are quite literally being ‘eliminated’.

Why is all of this important? If you were to read some of the comments on the video for the trailer of this movie, you’d begin to understand why 90% of Americans will likely die after an EMP. Commenters leaving comments such as the one below on the video trailer will quite obviously, and quite quickly, end up on the ‘dead’ list after an EMP.:

Just when you thought there couldn’t be a movie dumber than “God’s Not Dead”, there’s this, lol. Yay for crazy people!.
Fortunately, over at the Facebook page of “Amerigeddon the Movie” we see comments sharing more wisdom. As we have warned of over and over again on ANP, according to experts, only 9 meals stand between civilization and anarchy. Most Americans have no more than 3 days worth of food on hand. Once again, what if, suddenly and without warning, all of the grocery stores across America had no food, none of the banks nor ATM’s worked for people to get cash out and none of the gas stations worked, nor the hospitals, nor ANYTHING that we take for granted day to day? How long could you go without electricity without first going insane?

As we learn here, America is quite literally only 3 days away from chaos at any time. North Korea has two satellites capable of carrying miniaturized nuclear weapons flying over our country at least 3 times a day we’re told in the 2nd video. Will they be used to launch an EMP attack against America? As we’ve also warned before, any such attack against America will likely be met by a devastating attack in return. Let’s hope Kim Jong-un isn’t on a suicide mission for the North Korean people and the ‘new world order’ or we may soon find out what it’s like living in the ‘dark ages’ in America.

Are there those witihin our own government who are working to undermine the sovereignty of the United States within our once great nation? According to Heavin, it has never been more clear who the true enemies of America are.

To close, sadly and not surprisingly, this movie will be shown at only a limited number of theaters as seen in the following list from “Amerigeddon the Movie” with showings only in the states of Arizona, Colorado, Michigan, Nevada, North Carolina, Oklahoma, Tennessee and Texas. ANP has sent an email to “Amerigeddon The Movie” to enquire about a release online. If this is to happen (and we believe there are plans in the works), we will let our readers know as soon as we find out.