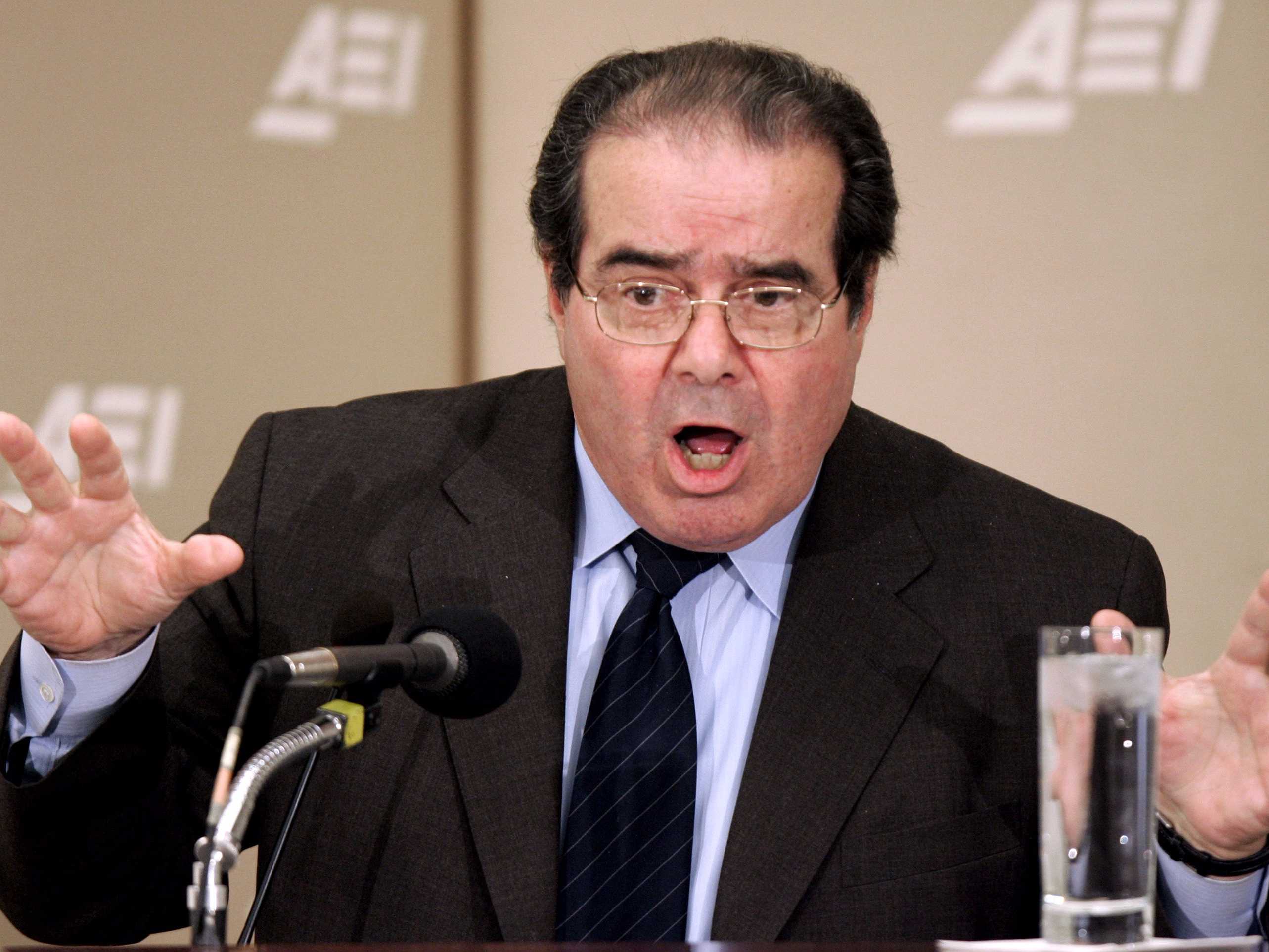 Even the MAFIA is enraged about the killing of Scalia

And you never mess with the Sicilian mafia!

Anonymous Submission from an Italian American

Justice Antonin Scalia was an only child whose father was Salvatore Eugene Scalia, an Italian immigrant from Sommatino, Sicily.  Here’s where Sommantino is located in the Province of Caltanissetta on the island of Sicilia. Now you have to know a little bit about the real Sicily to really understand the nature of the people there.  Sicily is a beautiful isle in the Mediterranean that is well known for being the most conquered island in world history.  It’s highly strategic location in the Mediterranean Sea made it a prize to every country that rims the Mediterranean coastline.  It’s raw beauty and beguiling serenity were irresistible to even the most crusty of seafarers and navies.

Because of this well-known predicament, the indigenous people who settled there over millennia had to bond together to defend their families and their homes.  Communities became very tight-knit, so tight-knit that a quasi mafia was formed as a sort of protection racket.  As this nascent mafia (not to be confused with the original 5 families of the MAFIA*) grew in numbers and power, it became corrupted and took advantage of the same people they were supposed to safeguard. It then morphed into a full-blown protection racket which oppressed the people.

In due course of time these protection rackets across the island of Sicily became highly organized and formed an even more sophisticated and powerful network throughout all of Italy.  That ubiquitous network ultimately evolved into the notorious Sicilian mafia of New York City and Chicago fame.

The Sicilian mafia is quite proud of their Sicilian Heritage

What is not well known, except within the Cosa Nostra, is that the original mafia in Sicily was often closely associated with the Roman Catholic Church and other organizations which did a lot of good in the community.  They did this for two reasons.  First, they felt better about themselves given the dirty work that comes with being a part off the Sicilian mafia. Secondly, the real mafiosas loved to support the famous Italian Americans like Frank Sinatra so as to reverse their bad image.  Not that it worked that way, but it made them proud of their heritage. Justice Scalia was famous in Sicily for rising higher in the firmament of American politics than any other Italian-American in U.S. history.  Regardless of your political persuasion in Sicily, you were proud of the honorable jurist on the Supreme Court of the United States. After all, he was still one of them with Sicilian blood running through his veins.  Anyone who knew Antonin Scalia experienced his joie de vivre and infectious passion for life.  A living expression of his love of life were his 9 children and 28 grandchildren.

Now we come to the VERY serious part of this post.

The Sicilian mafia working together with the Black Nobility MAFIA is and has been the most well connected criminal organization in the world over centuries.  It always knows what’s going on on the street.  These guys pride themselves on having their ear to the ground.  Whatever the scuttlebutt is on, say, a political assassination, they know how it really went down before it even happened.  Yeah, they’re that informed about practically every sordid happening anywhere and everywhere on Planet Earth.

When one of their own gets taken out — regardless of who ordered the hit — they take it very personally.  The Mafia — both of them — are especially unhappy when one as prestigious and proud as Antonin Scalia is rubbed out.  No, they don’t like that … … …
at all.

Yes, the world turns in highly mysterious ways in 2016, but with Sicilians, blood is always thicker than water, unlike the Brits, the French or the Americans.  ALWAYS!

Therefore, should it be proven that Justice Antonin Scalia was killed because of the many reasons that the New World Order ruling cabal would have him killed for, they now have extremely serious problems.  All of them!

You just don’t kill a sitting SCOTUS jurist of Sicilian ancestry and expect to get away with it. Now to the real point.

Every single person who had anything to do with the death of the Honorable Antonin Scalia will answer for their involvement.  No matter how far they are from the actual scene of the crime, every co-conspirator will find themselves in grave danger.

Just an FYI, it makes no difference whether the actual decision-makers were CFR or Bliderbergers, Trilateral Commission or Committee of 300, One World Government wannabes or New World Order big wigs, when the curtain falls on them, it will likely be fast and furious … like a guillotine!

Now many will say — CORRECTLY —  that the MAFIA plays an integral role in the leadership of the current NWO ruling cabal.  And, therefore, Justice Scalia was whacked only because he posed a very serious impediment to the implementation of the NWO climate change agenda.  Also correct.

Scalia murdered? Sealed his fate 4 days before his death?

However, these various covert organizations, which really do rule the world by the way, are now full of dissension within the ranks … all the ranks from low to high.  The ongoing and intensifying internecine warfare within the World Shadow Government has never been so heated and impactful.  Much of what you see in the headlines is due more to THEIR war with each other, than with their war on us — We the People. You see, the snake of predatory capitalism is literally eating its own head (it has already eaten its tail — that’s us) at this very moment.  The carefully premeditated assassination of Justice Antonin Scalia stands as a testament to this Illuminati fact of life in 2016.

Further testimony to this dramatic War of the Titans occurring at the very pinnacle of the peak of the pyramid of worldly power is provided by President Barack Obama himself.  Yes, he knows something very wrong and dangerous just occurred with the shocking murder of the beloved Justice Scalia.  The following video illustrates just how shaken he is, as he was forced into the conspiracy as executed it was executed and covered up by the U.S. Federal Government … his Administration.  Now what?  How will We the People respond?  It’s the Year of the Fire Monkey, so hold onto your seat if you’re not participating directly in the 2nd American Revolution.

Marco Polo and the Black Nobility
*The unprecedented accumulation of wealth by the Black Nobility had its roots in the commercial ventures to the East made by Marco Polo of Venice in the 13th century. He was used to establish the largest export/import business in world history. And, yes, it grew to be the most profitable business venture of all time, as it effectuated the greatest transfer of wealth the planet has ever seen. This highly efficient enterprise was responsible for the most successful exchange of goods, services and resources from East to West, and vice versa, ever to have occurred. It continues up to this very day.
(Source: The Global Economic and Financial Control Matrix Disintegrating in Real Time)

The author who submitted this piece for publication was born into a family that was half Sicilian and half northern Italian.  Needless to say, every day evolved in such away that Mount Vesuvius blew its top every morning whereas Mount Etna erupted every evening. Yes, it was that completely crazy and explosive.  Hence, the author was forced onto the path of understanding how the world really worked.  He quickly realized that many of the problems of today’s world not only lay with the legacy of the Holy Roman Empire and the Roman Catholic Church, his religion of birth, but also with the modern nation of Italy and the exceedingly heavy influences of the original Black Nobility.

He came to find out that the Black Nobility were not only Roman Catholic Italians, they were also Jewish bankers and Muslim businessmen from the Middle East.  They were in fact represented by the rich and powerful from all over the globe, including the Orientals who bought into the original Italian corporations, particularly those chartered in both Venice and Genoa.  These were, in fact, the world’s first corporations and were based on Roman (Catholic) law.  Those predatory capitalist corporations of London came along centuries later, after the Italians had already set up the monopoly board in their eternal favor.

There are VERY good reasons why all roads lead to ROME … … … and to get there you must first go through Venice, and Genoa, and Milan, and Turin, and Florence, etc.

What are three possible ways by which Justice Scalia may have been murdered?

Justice Scalia’s ‘Natural Death’—Cui Bono? And Why They Did It!