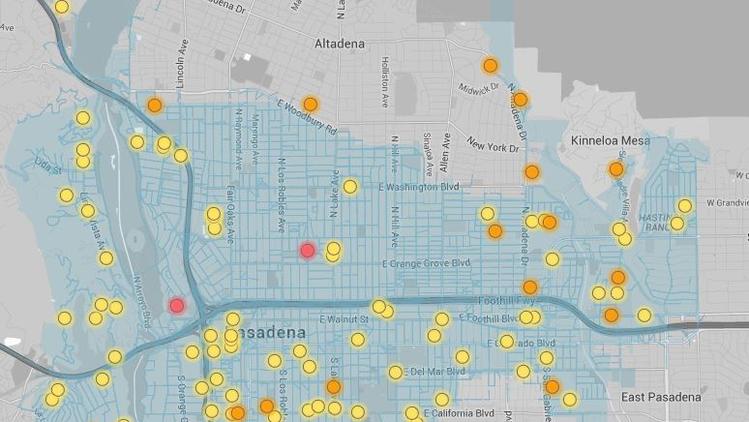 An environmental group has identified nearly 250 locations where planet-warming methane is leaking from natural gas lines under streets in the Greater Los Angeles region.

Environmental Defense Fund researchers outfitted a Google Street View mapping car with real-time air monitoring equipment that can detect elevated levels of methane, the main component of natural gas. Starting in August, they drove the vehicle over more than 1,000 miles of roadways in Chino, Inglewood and Pasadena.

After analyzing the data in collaboration with scientists from Colorado State University, the researchers plotted the leaks and their relative size on an interactive map and reported the results to Southern California Gas Co., which serves millions of customers in Central and Southern California.

“These leaks are all over the place: In our neighborhoods and under our cities,” Tim O’Connor, who directs the Environmental Defense Fund’s   California Climate Initiative, said in releasing the map Thursday.

Such leaks do not pose a threat to public safety, but are important to repair because they fuel global warming, he said.

Methane is a potent greenhouse gas that traps heat in the atmosphere. Experts say that clamping down on methane leaks will be crucial to meeting Gov. Jerry Brown’saggressive goal of slashing greenhouse gas emissions 40% below 1990 levels by the year 2030.

The environmental group’s effort is the latest in a series of mapping projects in six U.S. cities, including Boston and Indianapolis. The Environmental Defense Fund plans to conduct additional methane mapping this summer in Orange.

Southern California Gas Co. on Thursday released its own interactive map of leaks the company has detected on its system but deemed to be non-hazardous. That map can be searched by ZIP Code and shows whether a pipeline leak is being monitored or is scheduled for repair.

Typically, leaks are considered non-hazardous if they are far from an ignition source and away from structures where gas could build up to dangerous concentrations.

Deanna Haines, director of gas engineering for the company, said utilities focus their efforts on repairing leaks that threaten public safety. But that is changing as the industry faces more scrutiny over its greenhouse gas emissions.

“This will help raise awareness that we need to get funding to go after these environmental-related emissions,” Haines said.

According to Haines, the company replaced its oldest, cast-iron pipelines decades ago. Although about half the region’s distribution system has upgraded to plastic pipe, a fair amount of unprotected steel pipe remains and must be replaced to reduce leaks.

In November, Southern California Gas requested approval from the California Public Utilities Commission to use more than $6 million from ratepayers to accelerate pipeline replacement and leak repairs through 2018.

The utility was not involved in collecting data for the Environmental Defense Fund project, but had the opportunity to review and respond to the group’s findings before they were released, O’Connor said.

Southern California Gas technicians went to locations where the Environmental Defense Fund reported leaks to conduct their own measurements. The company found that 40% to 50% of the methane detected by the researchers did not correlate to actual leaks in the system and may have been the result of methane from other sources, including natural seeps or field gas.

But the group’s analysis, Haines said, did identify some leaks Southern California Gas was unaware of — including a few in Pasadena and Chino that had to be repaired immediately.

Under a new state law, the California Public Utilities Commission is charged with adopting rules and procedures to minimize methane leakage from natural gas infrastructure that is contributing to global warming.

Gas utilities are required by Friday to file a report about their natural gas leaks how they manage them.