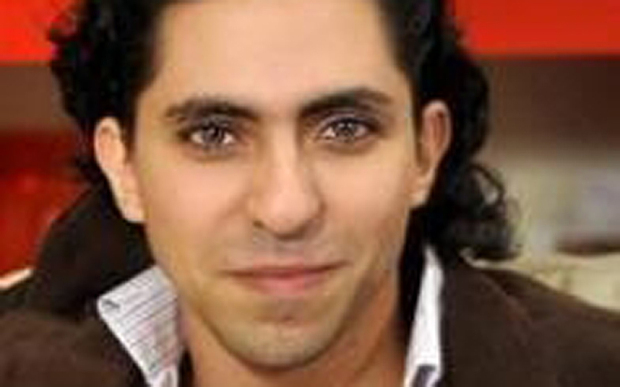 Raif Badawi, a Saudi blogger, has his punishment of 1,000 lashes suspended on medical grounds after international outcry

The activist sentenced to 1,000 lashes in Saudi Arabia underwent his first flogging despite the country’s Supreme Court being ordered to review the case, his wife has told the Telegraph.

Raif Badawi, 31, was due to undergo the second of 20 rounds of 50 lashes on Friday morning, a week after receiving the first in a public ceremony which was condemned worldwide.

Doctors ordered a postponement, saying the wounds from the first round had not yet had time to heal, giving rise to hopes that Saudi Arabia might be bowing to international pressure over the case.

But Ensaf Haidar, Mr Badawi’s wife who is now in self-imposed exile in Canada with the couple’s three children, said there was no sign yet of leniency.

She called for the rest of the sentence to at least be held off until the Supreme Court completed the review of the case it had been asked to undertake by the Royal Court of Saudi King Abdullah bin Abdulaziz.

“Despite that review, the flogging was carried out without waiting for a final decision,” she said. “I am calling for the physical punishment to be suspended until the court considers the case.”

She said the decision by the King to refer the case caused her to hope that he wanted to “solve” the case, but there was no sign of that.

Mr Badawi’s first flogging was surreptitiously filmed on a mobile phone, with footage uploaded to the internet.

It was conducted with a flexible stick, in front of a large crowd in the public square by the al-Jafali mosque in the Red Sea city of Jeddah. Mr Badawi was allowed to keep his shirt on, as is normal in Saudi Arabia, lessening the effects somewhat, but he can still be seen to flinch.

“Raif told me he is in a lot of pain,” Mrs Haidar said in an earlier statement released by Amnesty International, which has campaigned on his behalf. “He said that when he was being flogged he took the pain silently and rose above it, so that history will know that he did not react to their punishment.

“His health is poor and he cannot take another round of lashes. On Thursday night, the UN commissioner for human rights, Prince Zeid Al-Hussein, called the sentence “cruel and inhuman punishment”, while key Saudi allies Britain and America have also issued statements of concern.

Online, critics around the world have accused the country of hypocrisy, after it issued strongly worded support for France in the wake of the shootings in Paris last week by Islamist terrorists.

On Friday, the second flogging was suspended at the last moment. “[Mr] Badawi was removed from his jail cell in Jeddah this morning and taken to the prison clinic for a medical check-up before the latest round of his 1,000-lash sentence was due to be carried out,” Amnesty said.

“The doctor concluded that the wounds had not yet healed properly and that he would not be able to withstand another bout of lashes at this time.

“He recommended that the flogging should be postponed until next week, though it is presently unclear whether the authorities will fully comply with this demand,” the human rights organisation added.

Dr John Hayward, a physician with Freedom from Torture, had told the Telegraph in advance of Friday’s announcement the body was unlikely to recover from one set of beatings within a week, adding to the pain of the second.

“Even with your clothes on, it can be extremely painful,” Dr Hayward said. “It will probably not break the skin because of the shirt being on, as it would if it was off.

“There will be substantial bruising, which will persist for two weeks or so, so he won’t have recovered from the first by the time he receives the second set.”

Mr Badawi is one of a number of activists given tough sentences for urging reforms to Saudi Arabia’s ultra-traditional mixture of absolute monarchy and religious authoritarianism.

He was arrested in May 2012 and sentenced in May last year to ten years in prison, a 10-year travel ban, and a ban on appearing on media outlets, as well as the 1,000 lashes.

If the principle underlying the delay is maintained, it could mean that the punishment is simply dragged out for 40 weeks rather than 20, adding to Mr Badawi’s mental trauma.

However, an indefinite postponement would be a neat compromise for the Saudi authorities, who would be reluctant to be seen to bow before western pressure, particularly at a time when activists are calling for wider political change in the country, as across the Arab world.

They are also bound by the opposite pressure internally, with large numbers of traditionalist Saudis taking to social media to defend the punishment. They also accuse the authorities of being weak in the face of insults to Islam in the West – for example from the publication of cartoons of the Prophet Mohammed in publications like Charlie Hebdo.

Said Boumedouha, Amnesty’s Middle East and North Africa deputy director, said: “Not only does this postponement on health grounds expose the utter brutality of this punishment, it underlines its outrageous inhumanity.

“The notion that Raif Badawi must be allowed to heal so that he can suffer this cruel punishment again and again is macabre and outrageous.”

Amnesty also called on the British government to issue a more strongly-worded demand for Mr Badawi to be released.

“Our ministers rightly celebrate free speech in Paris or in London but suddenly seem to lose their own power of utterance when it comes to forthrightly and publicly condemning the authorities in Riyadh,” Kate Allen, its director, said.

“Why do ministers keep wearing the Saudi muzzle? It seriously weakens the UK’s credibility if it’s seen to tone everything down when it comes to oil-rich Saudi Arabia.”