Opinion: China’s rigged markets could fall much further, much faster 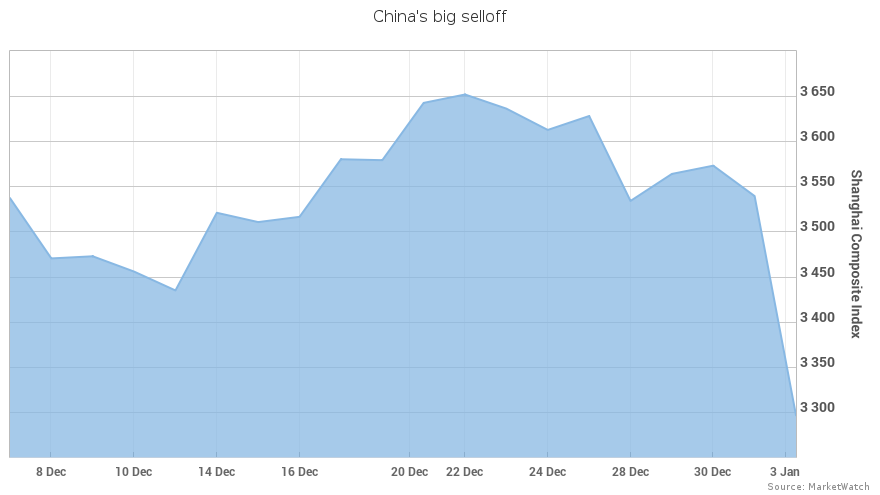 Opinion: China’s rigged markets could fall much further, much faster

Shanghai’s stock market fell 7% on Monday before trading was halted.
HONG KONG (MarketWatch) — Those fearing that China is the big risk in the year ahead for global markets hope that the first trading day of 2016 does not set the tone for the rest of the year.

Between a 7% fall in shares that triggered new circuit breakers on the Shanghai SHCOMP, -6.86% and Shenzhen stock exchanges 399100, -8.21% and accelerated weakness in the yuan, there is ample fodder for China bears.

The question being posed anew is whether 2016 will be the year Beijing finally throws in the towel on its attempts to coerce multiple asset markets upwards, while its economy continues to sink in a sea of debt.
While yet more weak industrial activity numbers from the Caixin China December PMI got the new year off to a flat start, the bigger concern is whether the leadership still has the will or the ability to continue holding up stock prices as its confronts ever more painful policy choices.

Chinese Markets Slammed Shut After Stocks Tumble(1:40)
Asian markets tumbled on the first day of trading in 2016, with declines so steep in China that authorities halted all mainland trading before the end of the day.

The black start to January trading had its roots in the controversial government intervention last summer to rescue stocks from a rout, which wiped over $4 trillion off share values and sent shock waves around global markets.

This appeared to have paid off after a subsequent partial market rebound, yet it always left a worrying overhang both from resulting heavy state ownership and the imposition of a six-month ban on major shareholders (over 5%) from selling positions.

With that six-month moratorium ending this coming Friday, investors were spooked that there could be an avalanche of pent-up selling.

And this time around will the government still be around to come in as buyer of the last resort?

Last week I wrote that as the value of both China’s currency and equity markets are so dependent on government intervention, this presents an important and hard-to-quantify risk factor.

Must read: China faces even more painful choices in 2016

Some $500 trillion of foreign reserves were used up last year to support the yuan and money mobilized to buy stocks has been estimated at 5 trillion yuan or 10% of gross domestic product.

The beginning of the year already appears to signal that authorities are dialing back on intervention, at least to support the currency. The yuan trading fix on Monday was set a full 100 basis points lower, putting it below 6.5 to the U.S. dollar USDCNY, -0.0459% for the first time in more than four years.

According to Daiwa Research, today’s yuan gap down is likely due to continued capital outflows and stronger yuan selling pressure after the holidays. They contend Beijing is trying to orchestrate an orderly currency adjustment lower, a view supported by the December change in moving to valuation based on a trade-weighted basket.

But the risk here is that it can be difficult to maintain control when expectations build that the currency is set on a depreciation path. This can lead to a snowball effect with capital outflows, says Daiwa.

The Japanese broker also forecasts that the dollar-yuan exchange rate could fall to 7.50 by the end of 2016. If a move of this size were to materialize you could still get a much less orderly exit out of the yuan and Chinese assets, including equities.

While there have been various comments from officials that there is no need to devalue the yuan, it is notable that Chinese companies have been positioning for further currency weakness.

As well as a reduction in yuan deposits in Hong Kong and Taiwan, mainland Chinese companies have been buying commercial property in the territory, which gives exposure to the Hong Kong dollar USDHKD, +0.0000% . Over the festive holidays there was unusual activity in the property market when an apartment sold at a record price of HK$594 million, or HK$100,000 per square foot.

Another reason to be alert for a shift in government policy is the recent comment by President Xi Jinping. He was quoted in the mainland press saying that China will face increasing challenges over the next five years for which strong stimulus to boost development is no longer the solution.

The priority for Beijing now appears to be restructuring its loss-making heavy industries, with painful commodity price falls showing few signs of easing up.

Analysts warn this will come with a large bill to clean up bad debts and provide support for laid-off workers.

Given these shifting priorities, it is hardly a stretch to conclude that it would be politically difficult for Beijing to keep extending unlimited funds to bail out equity investors.

Ultimately when Beijing created a market when it was the only buyer, it also placed itself in an extremely exposed position.

If investors suspect the state is no longer ready or able to step in, expect Chinese equities to fall fast.