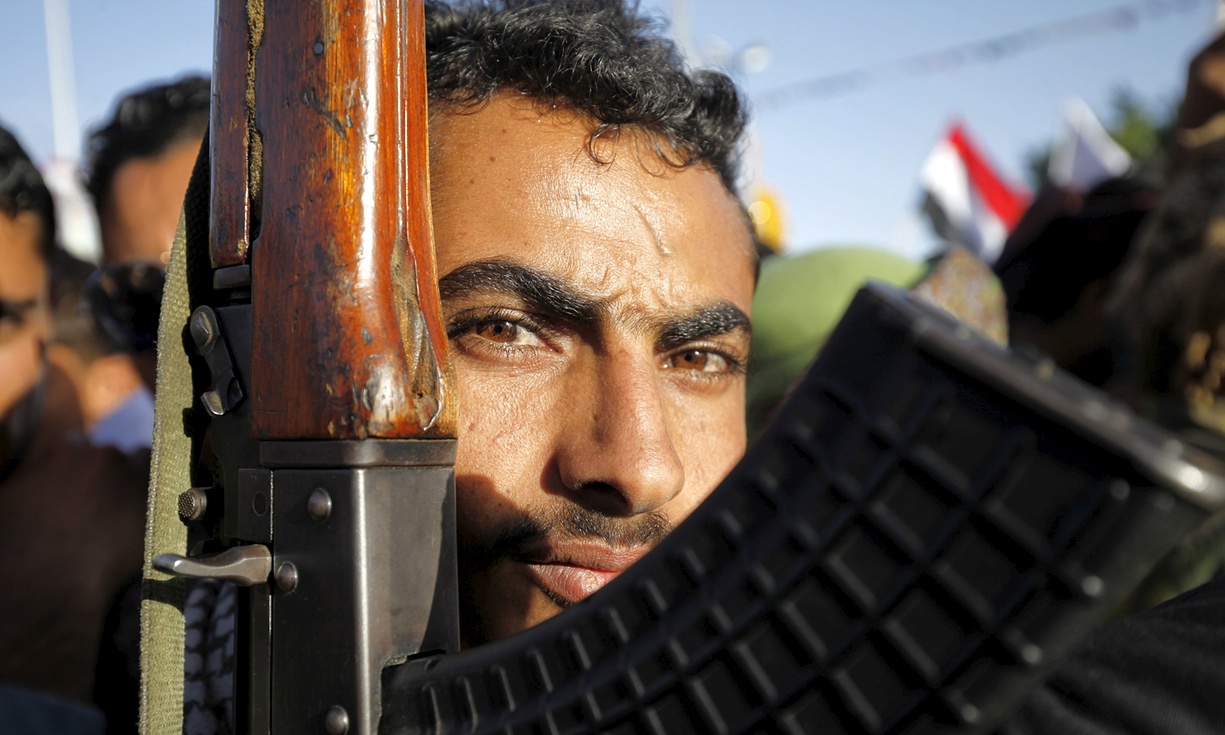 A Saudi-led coalition opposing Houthi rebels is creating a humanitarian catastrophe approaching the scale of Syria, and the US is complicit. Photograph: Mohamed Al-Sayaghi/Reuters

“The US and Britain are actively aiding and abetting Saudi Arabia as it indiscriminately kills thousands of civilians in Yemen.”
— Stop the War Coalition

The Yemen crisis is partly our fault. We can no longer facilitate this war

WHILE the crisis in Syria continues to garner front-page headlines and ample television coverage, the media has largely turned a blind eye to the other travesty unfolding in the Middle East:

Yemen has turned into a humanitarian disaster, where thousands of bombs are being dropped, 1.5 million people are displaced and more than 90% of the population is in need of assistance. The major difference? In Yemen, the US is one of the primary causes of the problem.

The United States and the United Kingdom are actively aiding and abetting Saudi Arabia while the country indiscriminately kills thousands of civilians in Yemen in what amounts to war crimes by almost anyone’s definition.

The two western powers, who often purport to care about democracy and human rights, are also helping the Saudi monarchy – one of the most repressive regimes on the planet – cover up those crimes at the UN.

These actions are abhorrent, and it’s shameful the brewing scandal has hardly received any attention from the US political establishment or television news.

The New York Times, the rare exception to the giant shrug much of the American media has given this critical subject, recently published a harrowing front-page story on the rash of indiscriminate bombing – conducted in response to Houthi rebels who have attacked the sitting government – that has been killing scores of civilians with direct help from the US.

That report came before the latest and deadliest attack on civilians yet: last week, a Saudi strike killed at least 130 innocent people at a wedding, mostly women and children. Over 500 children have been killed since the start of the strikes.

It would be hard for the US to give more assistance to Saudi Arabia as they commit these atrocities without actually dropping the bombs themselves: the Saudis are using cluster munitions (banned by treaty in the vast majority of countries around the world) supplied to them by United States defense contractors.

They’re dropping those bombs using American-made fighter jets. The US military, far from being a neutral observer, is actively providing the Saudis with intelligence and logistical assistance for their air strikes. And the US is finalizing a deal to give even more weapons to the Saudis. The Obama administration has already sold them more than $90bn of military weapons over the past five years.

As of Wednesday, the US and UK also successfully prevented the UN from conducting an independent investigation into the potential war crimes committed by Saudi Arabia. Instead, Saudi Arabia will be given license to investigate themselves. Human rights groups immediately castigated the decision.

It turns out that the UK and US also made another secret deal with the Saudi monarchy years ago, according to diplomatic cables published by Wikileaks. In an exchange of votes, the UK and US plotted to get Saudi Arabia the top spot on the UN human rights council, which was just announced last month – also to loud condemnations around the world. (The same week, the country finalized plans to behead and crucify the son of a prominent government critic, whose only crime was attending an anti-government protest when he was 17 years old.)

The Times also reported on the results of Saudi Arabia’s actions in Yemen for the US: “Rather than turning more Yemenis against the Houthis, though, the strikes are crystallizing anger in parts of the country against Saudi Arabia and its partners, including the United States.” So we’re likely creating a new generation of terrorists, just as the US’s past drone strikes in Yemen have done. And for what?

Even the US military can’t explain why they’re supporting this war so closely. There is no military or national security objective (besides keeping the Saudi Arabian government happy and the coffers of US weapons makers flush). As the Council on Foreign Relations’s Micah Zenko writes in his excellent and depressing analysis of the unfolding tragedy:

Rather, they call upon all parties in the conflict to halt their fighting, failing to mention that the United States military is one of the parties by providing material support, without which [Saudi Arabia and its military coalition] would not be able sustain airstrikes over Yemen for any period of time.

Unfortunately, hardly anyone inside the US government seems to care. The Intercept’s Lee Fang went to Washington DC to try to ask members of Congress about the killings. Many ignored him, or if they did talk refused to take on Saudi Arabia directly.

John McCain even denied that Saudi Arabia had killed civilians at all and blamed the Houthis for any deaths that may have occurred. He apparently was not aware UN officials have made clear that the vast majority of civilian deaths were the fault of the Saudi airstrikes, not the Houthis. (It should go without saying that none of this excuses any atrocities committed by the Houthis, which are horrific in their own right.)

So as the US media and politicians become more and more outraged at the senseless carnage in Syria over the next few weeks, as they well should, remember what they are blatantly ignoring: the US-backed travesty in Yemen.