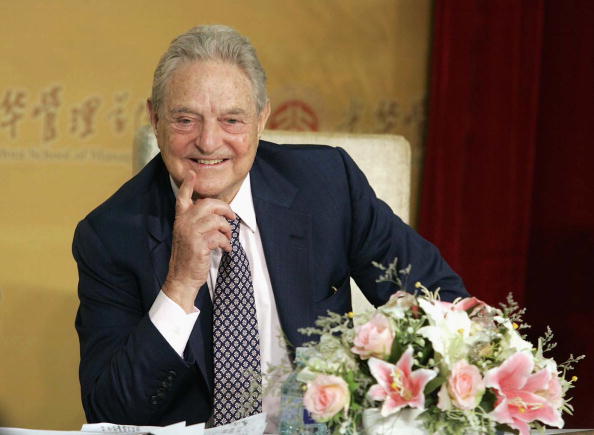 Soros is a man intimately familiar with currency crises

Beijing makes it clear that it sees George Soros as a threat and warns him from shorting the yuan in an op-ed published by the Chinese Communist Party’s mouthpiece.

Not long after billionaire George Soros forecast a so-called hard landing for the Chinese economy, Beijing fired back by calling out the high-profile investor, warning him of betting against its currency, according to media reports Tuesday.

“Soros’ challenge against the renminbi and Hong Kong dollar is unlikely to succeed, there is no doubt about that,” said a government official in an opinion piece widely cited by several media outlets.

The article headlined, ”Declaring war on China’s currency? Ha ha,” was published by the People’s Daily, the official newspaper of the Chinese Communist Party which is widely viewed as Beijing’s propaganda tool.

A translation of the Mandarin version of the editorial linked by ZeroHedge includes references to the U.S. suffering from a “Dutch disease” and “financial predators.”

Reports of the People’s Daily’s article follow Soros’ recent prediction that a precipitous slowdown in the Chinese economy is inevitable.

“A hard landing is practically unavoidable,” Soros told Bloomberg Television last week on the sidelines of the World Economic Forum in Davos, Switzerland. “I’m not expecting it, I’m observing it,” he said, referencing his China outlook.

Soros’ ties to seismic currency bets date back to 1992 when he accurately wagered that the pound would fall in value, forcing the British government to withdraw the currency from the European exchange rate mechanism. He also successfully bet against the Thailand baht ahead of the Asian financial crisis in 1997, which pushed several Asian economies to brink of sovereign default.

Although Soros hasn’t directly threatened to bet against China’s yuan, his reputation as the investor who broke the Bank of England might have been enough to draw Beijing’s attention.

Soros has been vocal about China’s recent economic woes, going as far as to warn that global markets are headed for a crisis akin to 2008 as China scrambles to find a new growth model.

Beijing’s admonishment to Soros marks the latest effort by the Chinese government to crack down on those it views as speculators trying to upend its market.

Soros didn’t respond to a request for comment via email and a call placed to China’s Ministry of Finance wasn’t answered.

The yuan USDCNY, +0.0684% which fell 4.7% in 2015, FactSet data show, is expected to slide further to 7 yuan versus the dollar by the end of the year from 6.58 currently on mounting worries about the Chinese economy, according to Deutsche Bank analysts.

Beijing authorities unexpectedly devalued the yuan in August in response to slumping exports and indicated that it would introduce further changes on how to value the currency against its peers which analysts believe will give the government more flexibility in gliding the yuan lower.

Worries about China have persisted into 2016, playing a key role in wiping out some $3 trillion in market cap in the first week of the year.

It isn’t just Soros expecting a rough patch for China. Most economists forecast China’s gross domestic product to grow in the 6%-range due to the country’s slowing manufacturing activity.