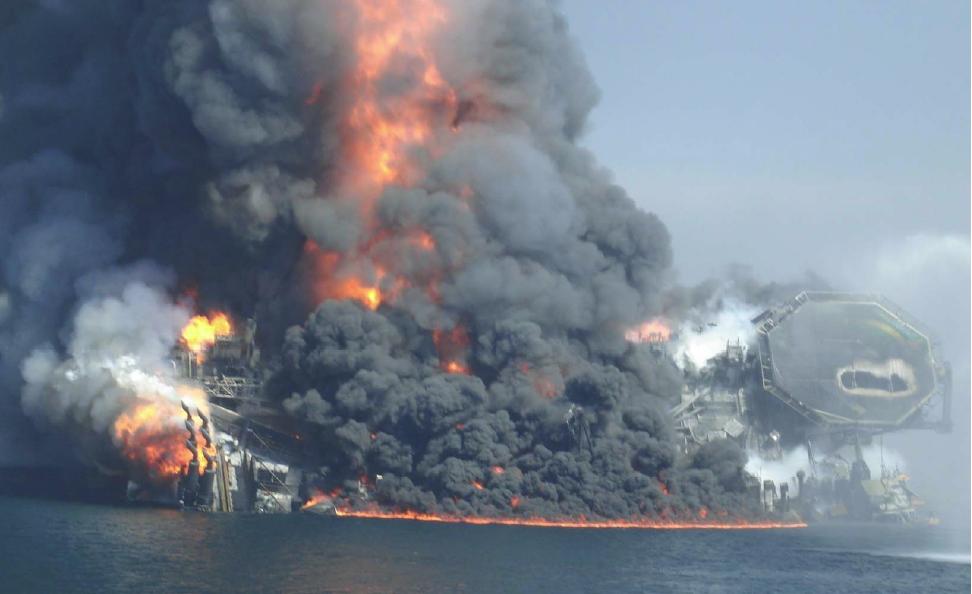 The BP Gulf Oil Spill becomes the 9/11 of the South;
only with far greater repercussions for the entire planet.

The investigation of a crime scene is always an ongoing evolution, where more and more facts give rise to more and more theories.  Often this evolution starts with a presumption of gross negligence/incompetence as the cause of the crime.  It can then take a turn to a more unfortunate understanding where it becomes clear that the perpetrators LIHOP (Let It Happen On Purpose?).  Lastly, there are those instances where the realization emerges in full relief that we are dealing with hardened criminals who MIHOP (Made It Happen On Purpose!).

It’s always an extremely unfortunate happenstance for a forensic analyst, during the course of investigation of a crime scene like the Macondo Prospect in the Gulf of Mexico (GOM), to come to this last realization of MIHOP.  The ramifications about what and why and who may have committed such a crime against the planet, against humanity and against a nation are just too staggering to wrap one’s mind around.

However, this is where we are in our current understanding of what truly went down in the GOM on, before and after April 20th of 2010.  Like 911, the entire world was transfixed by the dramatic fire and sinking of the Deepwater Horizon (collapse of the Twin Towers), as well as the subsequent gushing of the rogue well for 87 straight days (weeks of molten steel at ground zero).  Also like 911, it does appear that a leap in consciousness has now occurred which points directly to a MIHOP scenario.

It is very sad to say, but the facts on the seafloor, coupled with the truth in the elusive mud logs, BOP records, irrational and destined to fail attempts by BP to cap the well (methane hydrates gummed up the works in 2 containment domes), etc. all point to forces at work behind the scenes which guaranteed that a catastrophe of epic proportions would occur.  Furthermore, the forensic analysis which follows below categorically reinforces this unfolding theory.

We invite anyone who might contribute to this line of inquiry to forward any relevant information, documentation, emails, photos, videos, mp3s, etc. to the following contact info. Please be assured that all data/info will be treated with the utmost confidentiality (Whatever that means in these days of secret Homeland Security regimes and massive data mining by the NSA?).

Almost 8 months after the disastrous blowout on 20 Apr 2010, it is important to recap and critically examine the key turning points which could have averted BP’s Mega Oil Spill.  Or was it really an accidental disaster?  Like 911, new evidences point to an undeniable conclusion that this was a “MAKE-IT-HAPPEN-ON-PURPOSE” Disaster (MIHOP Disaster)

Figures 140-1 to 140-2 are among first ROV images confirming the third well and the massive NW-SE strike-slip fault zone which the three Macondo wells had drilled into. This major deep-seated fault zone is one of the several geological reasons why the gas blowouts occurred and why the subsequent oil-gas leaks from the reservoirs are so difficult to control. The other geological reasons are given in the next posting. It is worthy to note that BP’s geohazards assessment categorically stated that the “proposed well bore will not intersect any faults between the seafloor and the depth limit of this investigation at Horizon 6 or 5,328 ft bml”.

When details of the “nightmare well from Hell” first spilled out, it was obvious to independent experts that there had to be more than 1 well. In fact, the later forensic analyses (in early August) revealed three. For all these 3 wells to be so problematical, the same risky geohazardous conditions must have existed in all three locations. The hazardous geological conditions, and in particular the faults, can actually be inferred from the general seafloor morphology revealed by satellite images obtained from Google Earth. It was therefore intriguing why official investigations would overlook the obvious, as if the geological truth and root causes were not important.

From geohazards and geotechnical perspectives, no one in their right geological mind would want to drill a well into such a deep-seated massive fault zone without expecting serious troubles. It was as if all the 3 Macondo well locations had been intentionally chosen at worst possible locations without taking heed of the myriad red flags on this “express highway to disaster”. It is no surprise that all the three wells turned out to be nightmare wells from hell.

Safety Policies dictate that no drilling should not be carried out at locations with potential shallow gas hazards. Large shallow gas occurrences associated with geohazardous conditions are extremely difficult to control. Credit must be given to at least 4 completely different teams of drilling crews who managed to control the wells from the brink of disaster under 4 very trying drilling periods; on or around 7 Oct-9 Nov 2009 (well A, 0-4000ft bml); 3 – 13 Feb 2010 (well A, 4000-5000ft bml); 17Feb – 14 Mar 2010 (well B, 0-13100ft bml); 16 Mar- 17Apr 2010 (3rd undisclosed well, 0-18300ft bml). It was rather unusual for a complete drilling crew change at the start of each drilling period. Was this unusual imprudent measure taken to isolate and prevent any knowledge of previous near-disaster misses on the drilling rig? No competent and professional driller would want to risk their crew’s lives with such high drilling risks; if they had known.

Even with a Slight Risk of shallow gas blowout, standard HSE (Health, Safety & Environmental) procedures require prudent extraordinary precautions if the priority option of shifting the location cannot be executed for whatever reasons. Does a faulty critical-failsafe BOP with neglected maintenance efforts look like a prudent extraordinary precaution?

Due to high drilling costs, any well, even those without drilling risk issues, would normally be closely monitored from spudding to completion for any unexpected circumstances. The fact that the reported drilling problems had been allowed to persist unresolved through a 7-month period from 7 Oct 2009 till 20 April 2010, seems more like a deliberate neglect rather than prudent exploration management.

It is interesting to note that BP’s geohazards assessment stated the “risk of encountering shallow gas as Moderate”. See Willful Negligence In BP’s Shallow Hazards Assessment- Part IIIb Of Root Causes. Whether the omission of faults and other geological factors that contributed to the high drilling risk, were deliberate or otherwise, it is obvious there were elements of willful negligence. It would have been a no-brainer to shift to a safer location by just a few hundred metres south; away from the fault zones and the obvious seabed escarpment.

Was the geohazards assessment deliberately toned down with ambiguous wording? If there had been no drilling risk at all, why couldn’t the assessment be stated more clearly? The hazards assessment could have been unambiguously worded as “There is no drilling risk associated with two sand-prone sequences within the middle and lower portions of Unit 6 in the absence of faults and other geological factors”. It is a fact that “gas within deeply bedded sequence” poses little or no drilling risk once it has been adequately identified. Shallow gas occurrence is only a drilling risk if it occurs under certain hazardous geological conditions. So the phrase “the risk of encountering shallow gas as Moderate” is by itself intentionally ambiguous, as is “the risk of shallow gas blowout” or “drilling risk” that really needed to be assessed and not the risk of encountering the gas itself.

To be absolutely clear, scientific and simple, there should be a clear statement whether drilling risks exist or not. An ambiguous assessment that covers all possibilities (“cover thy arse” or CTA rule) is by itself a hazard, since it makes no statement at all on the potential drilling risks of a shallow gas blowout.

If drilling risks have been astutely assessed, then the safest and logical procedure is to shift the proposed well to a safe seabed location with negligible drilling risk. Even if the initial geohazards assessment was flawed and completely missed the “forest for the trees”, the problems encountered during the initial progress of drilling should have alerted and forewarned of the dangers ahead.  The fact that BP pressed ahead with even greater haste just showed their imprudence and recklessness in exploration management. Sadly, this is the norm rather than the exception with high-stakes oil exploration around the world today. This is why a thorough case study of what went wrong with the BP’s Mega Oil Disaster is so crucial to averting the next oil or exploration disaster.

It is strange that the official investigations omitted the numerous drilling problems encountered at well A from 7Oct to 9Nov 2009. Whichever way you cut it, drilling only 4,000ft in one whole month is one heck of red flag when the expected target was 12,000ft per month. Truth be told, Well A was already having serious drilling problems at least a week before the Transocean Marianas drilling rig was damaged by Hurricane Ida.

Apparently nothing was learnt of the failed 2009 campaign. Instead of reassessing the “flawed geohazards assessment” and shifting to a new safer location in accordance to standard HSE procedures, BP imprudently reentered Well A on 3 Feb 2010; only to abandon it 10 days later. Why blow more than 20 million USD on a leaking well that could not be drilled, especially one which had been hastily abandoned for more than 3 months? An example of waste and haste management?

The gas-charged shallow formation not only collapsed-in, it bent and jammed the drill-string at the newly drilled open well bore (4000-5000ft). No wonder, the “jammed drill-string” could not be pulled out. It had to be cut. Well A had to be illegally abandoned with the open un-cemented leaking well. The BOP was removed and used on the next well.

The purported original “had-not-been-removed” BOP shown on top of Well A from mid June onwards was actually reconstructed and re-installed for the “phony capping show”. Earlier videos could not show the purported original BOP at Well A simply because there was no BOP on Well A. The proofs are in video footages of the originally blown BOP being manually worked on, the protection cage cut and removed, reconstructed besides the Well A wellhead.

Yet according to the official story, the “original had-not-been-removed BOP” on Well A had never been blown off and had been in place since drilling started in February 2010. There had been “manufactured safety concerns” about removing the “original had-not-been-removed BOP” from the wellhead, lest it triggered a renewed oil gush, or worse, another uncontrollable blowout.  So how do you explain the numerous “BOP sightings” away from Well A’s wellhead?

Apparently the problems at Well A did not matter at all. Although Well B was only 300ft (a very small distance with regard to geohazardous conditions) and had identical geohazards assessment as Well A, there was no concern at all that Well B would share the same fate. Any professional geohazards expert would have re-examined the hazards assessment at Well B after the fiasco at Well A. Neglect to do so was tantamount to professional negligence. Would any surgeon neglect to monitor the patient’s conditions following a heart surgery?

Forced to abandon Well B (on or around 14 Mar) after experiencing several out-of-control well near-disaster misses, BP went on to spud at a third undisclosed well location without submitting any application to MMS or any geohazards assessment on the location 720ft NW of Well A. If there had been a geologically realistic reassessment of the whole situation, the disastrous blowout on 20 Apr 2010 could have been averted.

In conclusion, it is not the lack of technology, expertise, stringent regulations or even prudent HSE policies which cause this mega-disaster. It is the reckless and imprudent exploration management, total disregard of geological realities and failed enforcement of stringent offshore regulations that are the ultimate root causes of the BP’s mega oil spill disaster. Sadly, this is an industry-wide problem and the next mega-disaster-in-waiting could be in the making in an oil exploration lease concession near you.