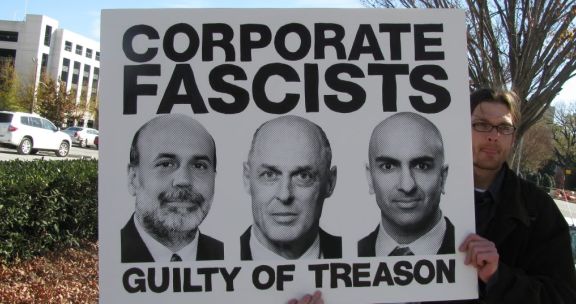 Let’s start with a quote from U. S. Congress Representative Louis T. McFadden, Chairman of the Committee on Banking and Currency for 12 years, quoted from the Congressional Record:

1a. The Federal Reserve (FED) is a PRIVATELY OWNED, organization. Unbelievable? Check the ENCYCLOPAEDIA BRITANNICA.

In all, there are about 300 VERY POWERFUL, partly foreign individuals that owns the FED.

2. Although the FED is required to give back most of its PROFITS back to the Treasury Dept., there is NO ORGANIZATION that has the power to AUDIT the FED (not even the Congress or the IRS). This creates a HUGE opportunity for creative accounting to hide the profit that ROBS the US Tax Payers Hundreds of Billions of Dollars annually.

3. Every year, a few Congressmen introduce a legislation to AUDIT the FED; and every year, the legislation is defeated. The FED has the most powerful, invisible lobbying power there is.

5. According to Article 1, Section 8 of the Constitution, the US Congress has the power to print money (The Congress shall have the power to coin money, regulate the value thereof, and of foreign coin, … According to the Supreme Court, the Congress can not transfer its power to other organization like the FED.

After several attempts to push the Federal Reserve Banking Act through Congress, a group of bankers funded and staffed Woodrow Wilson’s campaign for President. In 1913, Nelson Aldrich, maternal grandfather to the Rockefellers, pushed the Federal Reserve Act through Congress just before Christmas, when most Congressmen were on vacation. Naturally, President Wilson passed the Act when he was elected as a pay back to the bankers.

HOW THE OWNERS OF THE FED PROFIT AT OUR EXPENSE

Since the FED has the POWER TO PRINT MONEY, it can buy any amount of the US Government bonds at almost NO COST, save for the expense of printing money (approximately 3 cents per $100).

At this point, the owners of the FED already profit $99.97 for every 3 cents they invested to print the money. Basically, they exchange something that costs almost nothing to them with the US Government Bonds.

Since the FED can NOT be AUDITTED by the IRS (or even by Congress), most of this profit can go anywhere the FED owners want to. BTW, did I mention that the profit is TAX-FREE?

After buying the bonds, the owner of the FED can either:
1. Keep the bonds, and collect the interest the US Government now OWES them.
2. Sell the bonds to the US Tax Payers or foreigners.

In either case, the FED owners have profitted $99.97 for every 3 cents it invested to print the money. Remember, the FED is a PRIVATELY OWNED corporation, just like the Federal Express. The profit of the FED goes to the FED owners.

In order to pay for the bonds’ interest, the US Government taxes the US population.

When a US Citizen holding US Government bonds receives his/her return of investment on the bonds, essentially the money he/she receives is the tax money he/she is paying to the Government.

When the OWNERS of the FED receive the interest on the BONDS they’re holding, they are receiving that money for FREE (save the initial 3 cents per $100 investment to print the money)! Not only that, the FED owners receive the money TAX FREE.
Under the LAW, the FED is REQUIRED to RETURN its PROFIT back to the US Treasury. However, NEITHER the Congress NOR the IRS have the POWER to AUDIT the FED. The FED has used this obvious loophole to profit via creative accounting.

Consider this: every year, the FED profits by hundreds of billions of dollars by buying US Government Bonds. Yet it only returns approximately $20 billion to the US Treasury. The rest of the profit has been spent as Operational Expense.

The FED expects us to believe that the FED operational expenses amounts to $100s billion dollars annually!!!
The truth is, those profits were spent as “DIVIDENDS TO SHAREHOLDERS”!!!! Year after year, the FED owners bleed the US Tax Payer dry by hundreds of billions of dollars. Keep this going, and the US will go bankrupt in a few more years. Small wonder why the National Debt is increasing at its current rate.

WHY THE FED SHOULD BE ABOLISHED

1. The US Congress has the option to buy back the FED at $450 millions (per Congressional Records). When the Congress does this, it will own back the billions of US Government Bonds held by the FED. The US Government will actually PROFIT by buying back the FED! Also, the US government no longer has to pay interests to the FED owners on those bonds.

2. Through their ownerships in the FED, FOREIGN POWERS CAN and WILL influence the US economy. By controlling our interest rates and money supply, they can actually create economic disaster in the US , should the US disagree with them.

3. Although the FED directors must be confirmed by the Senate, the awesome lobbying power of the FED owners makes this process meaningless. The owners of the FED can and will put whoever they wish in the position.

4. Abolishing the FED will lead to lower inflation. At this moment, the FED prints as much money as needed to buy the US Government Bonds. Since the FED prints this MONEY out of THIN AIR, this leads to an INCREASE of MONEY SUPPLY, WITHOUT increase in GOODS/SERVICES. This, as all of us know it, leads to INFLATION.

If the general public buy those bonds with money that they EARNED by providing GOODS/SERVICES, the money supply level is contant in relation to the goods/services level. Thus, there is no inflationary pressure from selling these bonds. 5. Abolishing the FED will reduce the national debt level. By buying back the FED at $450 millions, the US Government will buy back the billions of dollars of bonds held by the FED. Thus, the net effect is a reduction in national debt. After buying back the FED, the US Government does not have to pay interest on those bonds it buys back, further reducing the national debt.

6. Abolishing the FED will lead to eventual balance budget. Today, even if the US Economy only grows by a meager 2% per year, the US Government should be able to put 2% of US-GDP dollars into circulation WITHOUT INFLATION.

The government can use this extra money supply to fund its project without raising taxes.
As long as the government does not print money more than the goods and services available in the US , there will be no inflationary pressures.
This had in fact been done with Executive Order 11110 of President Kennedy. Kennedy ordered the Treasury Dept. to print a US GOVERNMENT NOTES (vs. FEDERAL RESERVE NOTES). In effect, Kennedy bypassed the FED by making the Treasury Department printed REAL US MONEY, instead of selling bonds to the FED for almost free.

7. By point (6) above, the US Government can actually reduce taxes on everybody since it has more interest free money to spent in the amount equal to the growth of the US GDP. KEEP IN MIND, THIS MONEY WILL NOT CA– USE INFLATION, since the money is printed along with the growth of the goods and services.

What you can do to save the United States of AmericaThe FED should either be AUDITTED every year, or be abolished. I have done my part providing this information. It is up to you to decide the future of the US economy. Please do the followings:

1. DO YOUR OWN RESEARCH!!!!
If everything that I wrote here sounds too far fetched to be true, I challenge everyone of you to do your own research, and see for yourself.

When you are sure about the facts,

2. Call your Congressman and tell him to support the legislation to AUDIT the FED.

3. Call your representatives and ask them to support legislation introduced by Congressman Henry Gonzales to repeal the Federal Reserve Act of 1913.

4. Push for your home state to introduce and pass a legislation to end the FED scam. The following states have already done so:

Even if you live in these states, contact your representatives and tell them to support the legislation. THEY WILL LISTEN if you care to TELL THEM!!!

6. Collect signature on petitions calling for the end of the FED.

7. Tell friends and family about this fraud, and ask them for supports. Secrecy is the FED’s main strength. Since the media has been quiet, no one even notice this FRAUD that goes on for decades.

Now it is up to the tax payer to be informed. Inform everyone you know about this, and be organized!!! 8. Contact America Betrayed, Center for Action, 652 N. Glenview, Nesa , AZ 85213

10. This article may be reproduced and distributed freely WITHOUT changes.

Inflation and the Dollar’s Crash

Conquering the Spirit of Debt – 49 min

The Gig Is Up: Money, the Federal Reserve and You