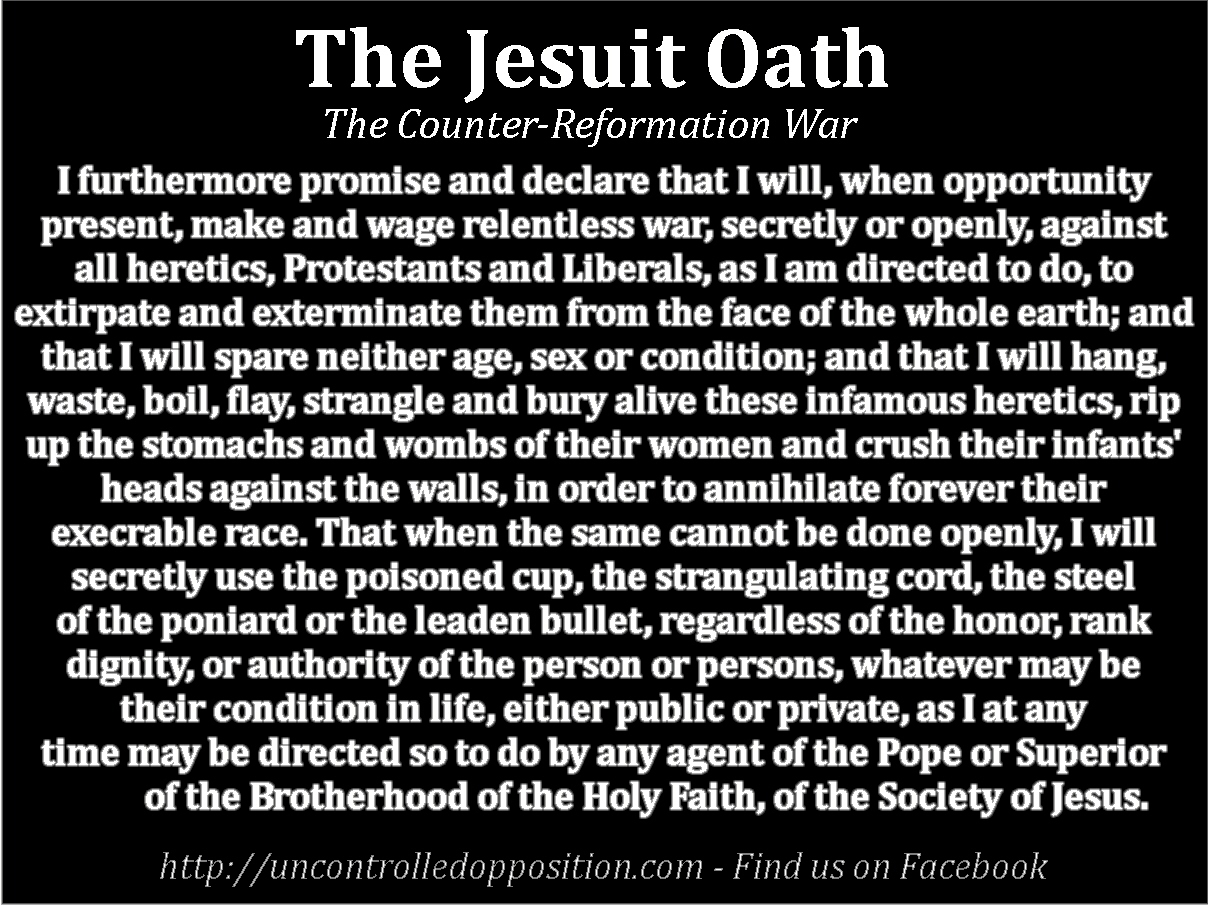 The Jesuit Order was created by Catholic Ignatius Loyola in 1500s to counter the Reformation and uplift the authority of the Papacy.

Read more about Loyola and the Jesuits’ plan to destroy Protestantism

*
Since the beginning, the purpose of the Jesuits has included global political domination, as Loyola himself once said:

Finally, Let all with such artfulness gain the ascendant over princes, noblemen, and the magistrates of every place, that they may be ready at our beck, even to sacrifice their nearest relations and most intimate friends, when we say it is for our interest and advantage(emphasis added).i

The world’s wars and revolutions occur because the Jesuits want to establish a one-world government with the Papacy at its head. Even over a century ago their plans were succeeding, as 19th-century theologian Luigi De Sanctis tells us:

At what then do the Jesuits aim? According to them, they only seek the greater glory of God; but if you examine the facts you will find that they aim at universal dominion alone. They have rendered themselves indispensable to the Pope, who, without them, could not exist, because Catholicism is identified with them. They have rendered themselves indispensable to governors and hold revolutions in their hands; and in this way, either under one name or another, it is they who rule the world (emphasis added).ii

As the sources below attest, the Jesuits have been involved in—and even spearheaded—many of the world’s worst wars, revolutions, and massacres. At times, the Jesuits are directly involved, at other times, they use their influence over the Freemasons and other secret societies.The Jesuits and Other Secret Societies

There is no safety on Earth anymore. The deep-rooted government behind the scenes has already been established, and no human power can overthrow it. The only way to win is with Jesus. He is our only hope. Don’t cling to your physical possessions, your social status, or even your family. All of this can be taken away. The only thing that can’t is God’s love. Are you ready to meet Him when He comes?

Don’t be deceived by the different faces we see in power today. They all belong to the same source, but each has a different role to play in the creation of a new world order and the final endgame predicted in Bible prophecy. Bush, Obama, and all the presidents to come have a specific role to play—the next step in the huge plan.

Read more about the history and reputation of the Jesuit Order

viii. “Who was Albert Pike?” threeworldwars.com

xi. J. E. S. Tucket, “Napoleon I and Freemasonry,” Ars Quatuor Coronatorum volume xxvii (1914): 96-141, as quoted on the website for the Grand Lodge of British Columbia and the Yukon.

xvii. Milan Bulajic, The role of the Vatican in the Break-Up of the Yugoslav State (Beograd: Struchna kniga, 1994): 99.

xviii. L. H. Lehmann, Behind the Dictators: A Factual Analysis of the Relationship of Nazi-Fascism and Roman Catholicism (1942): 26.

xxv. Walter Schellenberg, as quoted in World War Two in the News: “Death of Heinrich Himmler.”