Once Almighty Petrodollar Crashes And Burns, China Lights The Match 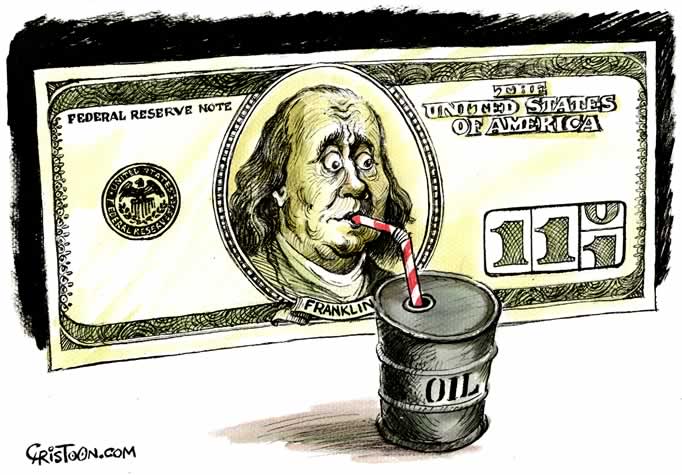 Why The Great Petrodollar Unwind Could Be $2.5 Trillion Larger Than Anyone Thinks

Last weekend, we explained why it really all comes down to the death of the petrodollar.

China’s transition to a new currency regime was supposed to represent a move towards a greater role for the market in determining the exchange rate for the yuan. That’s not exactly what happened. As BNP’s Mole Hau hilariously described it last week, “whereas the daily fix was previously used to fix the spot rate, the PBoC now seemingly fixes the spot rate to determine the daily fix, [thus] the role of the market in determining the exchange rate has, if anything, been reduced in the short term.” Of course a reduced role for the market means a greater role for the PBoC and that, in turn, means FX reserve liquidation or, more simply, the sale of US Treasurys on a massive scale.

The liquidation of hundreds of billions in US paper made national headlines this week, as the world suddenly became aware of what it actually means when countries begin to draw down their FX reserves. But in order to truly comprehend what’s going on here, one needs to look at China’s UST liquidation in the context of the epochal shift that began to unfold 10 months ago. When it became clear late last year that Saudi Arabia was determined to use crude prices to bankrupt US shale producers and secure other “ancillary diplomatic benefits” (think leverage over Russia), it ushered in a new era for producing nations. Suddenly, the flow of petrodollars began to dry up as prices plummeted. These were dollars that for years had been recycled into USD assets in a virtuous loop for everyone involved. The demise of that system meant that the flow of exported petrodollar capital (i.e. USD recycling) suddenly turned negative for the first time in decades, as countries like Saudi Arabia looked to their stash of FX reserves to shore up their finances in the face of plunging crude. Of course the sustained downturn in oil prices did nothing to help the commodities complex more broadly and as commodity currencies plunged, the yuan’s dollar peg meant China’s export-driven economy was becoming less and less competitive. Cue the devaluation and subsequent FX market interventions.

In short, China’s FX management means that Beijing has joined the global USD asset liquidation party which was already gathering pace thanks to the unwind of the petrodollar system. To understand the implications, consider what BofAML said back in January:

During the oil-boom era, oil-exporters used oil earnings to finance imports of goods and services, and channeled a portion of surplus savings into foreign assets. ‘Petrodollar’ recycling has in turn helped boost global demand, liquidity and asset prices. With the current oil price rout, external and fiscal balances of oil exporters are undermined, and the threat of lower imports and repatriation of foreign assets is cause for concern.

Yes, the “recycling of Asia-dollars might partly replace the recycling of petrodollars.” Unless of course a large Asian country is suddenly forced to become a seller of USD assets and on a massive scale. In that case, not only would the recycling of Asian-dollars not replace petrodollar recycling, but the “Eastern liquidation” (so to speak) would simply add fuel to the fire – and a lot of it. That’s precisely the dynamic that’s about to play out.

A careful reading of the above from BofA also seems to suggest is that looking strictly at official FX reserves might underestimate the potential size of the petrodollar effect. Sure enough, a quick check across sellside desks turns up a Credit Suisse note on the “secular downtrend in EM reserves” which the bank says could easily be understated by focusing on official reserves.

And further, here’s why the scope of the unwind could be materially underestimated.

Taken into context, the year-to-date fall in EM reserves accounts for only 2% of the total stock of EM reserves. However, the change in the behavior of EM central banks from persistent buyers to now sellers of reserve assets carries important implications. Importantly, official reserves will likely underestimate the full scale of the reversal of oil exporters’ “petrodollar” accumulation.

Crucially, for oil exporting nations, central bank official reserves likely underestimate the full scale of the reversal of oil exporters’ “petrodollar” accumulation. This is because a substantial part of their oil proceeds has previously been placed in sovereign wealth funds (SWFs), which are not reported as FX reserves (with the notable exception of Russia, where they are counted as FX reserves).

Now that the tide has turned, it is likely that not only official reserves drop but that SWF asset accumulation slows to nil or even reverses. SWF selling may be a slower process as assets tend to be less liquid, but the opportunity might still be taken to repatriate some investments, for instance to boost domestic rather than foreign infrastructure projects.

In other words, looking at the total amount of official reserves for oil exporters understates the potential for petrodollar draw downs by around $2.5 trillion. Now obviously, it’s unlikely that exporters will exhaust the entirety of their SWFs. Having said that, the fact that EM FX reserve accumulation turned negative for the first time in history during Q2 underscores how quickly the tide can turn and how sharp reversals can be. If one fails to at least consider the SWF angle then the effect is to underestimate the worst case scenario by $2.5 trillion, and if 2008 taught us anything, it’s that failing to understand just how bad things can get leaves everyone unprepared for the fallout in the event the situation actually does deteriorate meaningfully.

So that’s the big picture. In other words, the above is a discussion of the pressure on accumulated petrodollar investments and is an attempt to show that the pool of assets that could, in a pinch, be sold off to finance things like massive budget deficits (Saudi Arabia, for instance, is staring down a fiscal deficit that amounts to 20% of GDP) is likely being underestimated by those who narrowly focus on official reserves. Switching gears briefly to consider what $50 crude means for the flow of petrodollars (i.e. what’s coming in), RBS’ Alberto Gallo has the numbers:

If petroleum prices continue in to year end at their current YtD average ($52), this would represent a 60% decline in Petrodollar generated in 2015 vs between 2011 and 2014. Assuming that 30% of gross Petrodollars generated per year are invested in financial markets, this would imply $288bn ready for investments in 2015 vs a $726bn average between 2011 and 2014. Lower purchasing power from oil-exporting countries may in turn reduce demand for $-denominated fixed income assets, including $ IG and $ HY. US IG and HY firms have issued $918bn and $220bn YtD, which in total marks a record-high vs past years.

And while all of this may seem complex, it’s actually quite simple: less petrodollars coming in without a commensurate reduction in what’s going out means the difference has to be made up somewhere and that somewhere is in the sale of USD reserve assets which are prone to being understated if one looks only at official FX reserves. Contrast this with the status quo which for years has been more petrodollars coming in than what’s going out (in terms of expenditures) with the balance being reinvested in USD assets.

Simplifying even further: the virtuous circle (for the dollar and for USD assets) has not only been broken, but it’s now starting to reverse itself and the potential scope of that reversal must take into account SWF assets.

Where we go from here is an open question, but what’s clear from the above is that between China’s FX reserve drawdowns in defense of the yuan and the dramatic decrease in petrodollar flow, the self-feeding loop that’s sustained the dollar and propped up USD assets is now definitively broken and we are only beginning to understand the consequences.