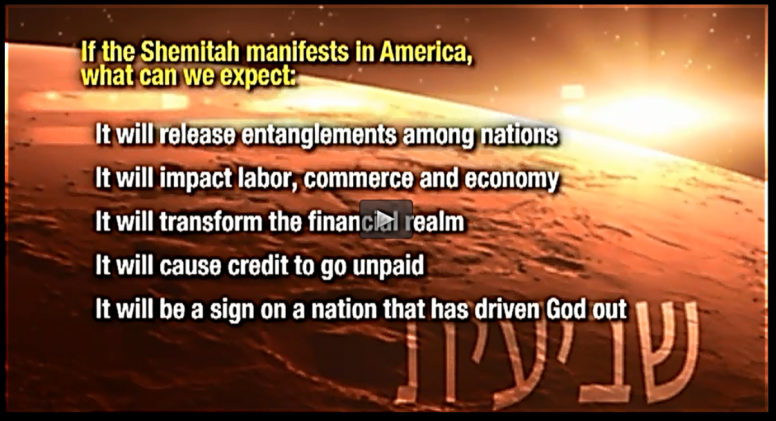 As the world waits to see what the end of a seven-year biblical cycle known as theShemitah may bring this fall, New York Times best-selling author Rabbi Jonathan Cahn issued a warning to prepare for economic calamity, war in the Middle East or even worse.

“I will state a warning which I have stated before,” Cahn told hundreds of people gathered at the Prophecy in the News conference in Orlando, Florida, this weekend. “Whether it comes in this time parameter of the Shemitah or the year following or not, I believe a great shaking is going to come to this land and to the world that will involve the collapsing of the American economy … and the removal of its blessings and prosperity.

“Whether it begins with the economic realm or not, I believe it’s going to be bigger than the economic realm and it may have the effect of famine or cutting off infrastructure for a time. The shaking doesn’t have to take place in the Shemitah (year), but I believe we need to be ready.”

Cahn’s warning has to do with what is known as the biblical Shemitah, or the Sabbath Year. During this year, according to Exodus and Leviticus, there was to be no working of the land. The last day of the Shemitah, Elul 29, is considered the “wipeout day” when all debts were “wiped clean.” The Shemitah is meant to be a blessing, but when Israel turned away from God it became “a sign of judgment on a nation that has driven God out of its life.”

In The Mystery of the Shemitah, Cahn described how this biblical pattern is connected to numerous events in modern history, including the rise of America to superpower status, World Wars I and II, the return of the Jewish people to their ancient homeland, the Six-Day War and even the rising of the World Trade Center.

He also noted a pattern of judgments at seven-year intervals in September 2001 and 2008 marked by the greatest crashes in Wall Street history, up to that time. The first occurred on Sept. 17, 2001, just a few days after the Sept. 11, 2001, terrorist attacks, and the second occurred on Sept. 29, 2008. Both occurred on the biblical day of Elul 29, the very day appointed to wipe out the financial accounts of a nation. The next one occurs on Sept. 13.

“For years, financial observers have been mystified why it is that all the greatest crashes tend to take place the same time of year,” Cahn says. “When is it? September to October. What if we take the greatest crashes in history. Do any of them take place at the end of the seven-year cycle of the Shemitah at the time of the wipeout and the answer is, ‘Yes.’ Every single one of them does. And the thing is the phenomenon is increasing. It’s intensifying.”

“What people don’t realize is one of the missing keys of end-times prophecy is the Shemitah,” says Cahn, author of The Harbinger, which has sold more than 2 million copies. “What’s the end of end-times prophecy? The Tribulation. How long is the Tribulation period? Seven years. It’s a cycle of Shemitahs that goes back to Daniel’s 70 sevens, which is linked to the Shemitah and linked to the judgment of Israel and the 70 years of judgment. Every seventh year is a Shemitah, but every seventh Shemitah is a Super-Shemitah, which we call the Jubilee … .”

Despite these patterns, though, Cahn says God is in no way bound by the cycle.

“Now nothing has to happen, but if it follows the course of most times when people predict things like this they’re wrong, but if it follows the course here’s what would happen. According to the pattern, each time it happens, there is war in the Middle East. No. 2, there is a major war focused on Israel—World War I and the 1967 Six-Day War. No. 3, that war results in an end-times restoration of the next step of end-times prophecy.”

“God gives a warning to Egypt to tell them what is coming,” Cahn says. “The turning point is that seventh cow.”

During his talk, Cahn pointed to a sign with biblical roots that went viral on newswires Sept. 25, 2014—the very day the world entered the current Shemitah: a cow with the number seven on its head.

“The pattern of the Shemitah is … it begins so undramatic you barely notice it,” Cahn says.

Here are the signs that Cahn revealed about the beginning of the Shemitah last year, on or around Sept. 25.

“This is the beginning of the ending of the American Age,” Cahn says. “We are seeing things we have never seen in human history.”

Could this be the beginning of the end of the ages—not just America?

“It is no accident. The Bible says woe to those who call evil good and good evil. It is no accident that at the same time the nation is calling evil good, it’s calling good—like you, like believers—evil. What’s happening now is you’re hearing more and more of Christians being persecuted for simply trying to stay true to their faith. Everything is coming to a head.”