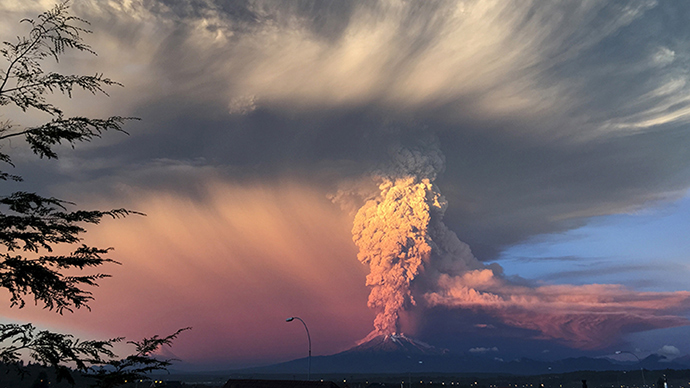 The record-breaking volcanic eruption in southern Chile is dramatically altering skies, as spectacular views emerge of white plumes creeping miles up into the sky after coloring the night orange. A second blast took place hours ago.

Nature’s colossal power was aptly demonstrated by Calcubo, which erupted a second time just a few hours ago, with agencies reporting a stronger eruption than the first.

An electrical storm mixed with the raging spurts of lava overnight to create what looked like the jaws of hell opening to swallow the surrounding landscape.

In scenes reminiscent of the movie Independence Day, white mushroom disks adorned the daytime skies, slowly claiming the city of Puerto Varas for their own. Even rarer and arguably more precious-looking views opened up against the setting sun, as the white disks collided with its glow. For a few hours it looked as though Puerto Varas was entirely submerged beneath a menacing blanket of fire. Breathtaking photography revealed the nighttime sky with its billions of stars, struggling against a mess of dark ash and debris. This is what the scene looked like in a video.