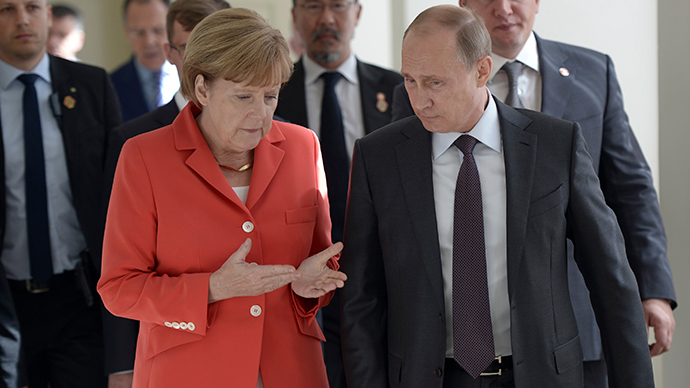 A group of prominent Germans are urging their country and the West to open dialogue with Russia. They believe this is essential to ensure peace in Europe, rather than further isolate Moscow, which they say would be “dangerous for the world.”

The petition named ‘New war in Europe? Not in our name!’ was signed by 60 people from Germany’s politics, economy, culture and media sectors – among them former Chancellor Gerhard Schroeder and film director Wim Wenders.

The group, led by former Chancellor advisor Horst Teltschik, former Defense Secretary Walter Stutzle and the former Vice President of the Bunderstag, Antje Vollmer, said that just because Russia and the West are experiencing differences at the moment, it “does not mean that the progress that we have achieved over the last 25 years with Russia should be terminated,” Telschik said.

They want to see a new policy of détente implemented in Europe and urge the German government and the West to move away from a confrontational policy towards Moscow, in favor of one of diplomacy.

The group adds that the Europe and Russia both have a joint responsibility to ensure peace and security on the continent, however this can only be achieved through, “equal security for all and that all partners are respected.” While the security concerns of certain Eastern European nations are being heeded by the West, the group says that Russia’s grievances should also be heard.

“The Russians’ security requirements are as legitimate and just as important as those of the Germans, the Poles, the Baltic States and Ukraine. We should not look to push Russia out of Europe,” a letter from the group said.

They also added that the media should try to be more objective in their reporting and should stop trying to demonize Russia at every given opportunity. “Every journalist who knows foreign policy well understands Russia’s fears that appeared when NATO members invited Georgia and Ukraine in 2008 to become members of their alliance.”

They believe that the West should not be so focused on Vladimir Putin as leaders come and go, but should make sure the West does not ruin relations with Russia for generations to come.

Historically, the group says, Russia has been a respected European power since the Congress of Vienna in 1814, while trying to confront Moscow has not been advisable. All attempts to forcefully change this status have failed “bloodily“.

“The last time it was the megalomaniac Hitler’s Germany that set about a murderous campaign to conquer Russia in 1941.”