Was a UFO caught docking at the International Space Station? 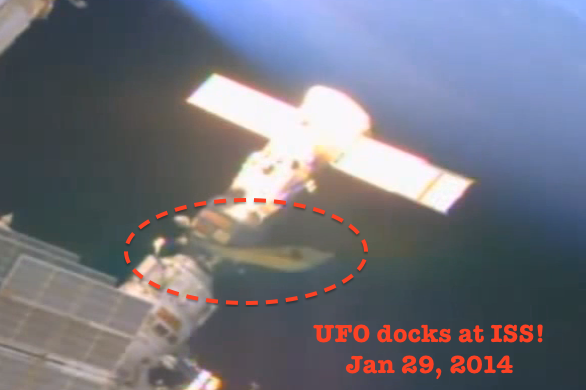 Did a UFO dock with International Space Station for alien astronaut meeting?

On January 29, 2014 the live camera feed of the International Space Station (ISS) showed what appeared to be a strange yellow elliptical object docked with the hull of the ISS. The live camera feed was quickly recorded and uploaded to Youtube, and is generating much interest as possible evidence of a UFO interacting with the ISS. This has led to claims that the UFO was docked so that extraterrestrials could meet with NASA astronauts. The idea that alien ships could dock with the ISS and have meetings with its occupants is supported by the claims of a former NASA employee who during his 34 year service worked on numerous NASA missions and finally as a Space Craft Operator. He claims to have witnessed a similar alien rendezvous during a U.S. Space Shuttle mission just before his security clearance was revoked by NASA in 1992.

The Youtube video “What is this please NASA?” was uploaded by a user Streetcap1 who has a reliable track record of posting authentic videos recorded from NASA and other national space programs. According to Scott Waring from UFO Sightings Daily: “This was caught by Streetcap1 of Youtube and yes its 100% real. I have followed this guy and his research for two years and he has never tried deceive anyone.” Waring goes on to describe the UFO and his belief that the video is evidence of an alien meeting with ISS occupants:

Here before us we see a long light yellow UFO parked alongside the ISS hull. There is no intent to hide itself or partly cloak, so we know the aliens and the astronauts on ISS know of this which makes us conclude…aliens and NASA had a meeting. I am sure this is just one of many that they have had, but to actually catch it on video is mind-blowing. This is not a glare…notice how the light changes and the UFO is a solid object near the ISS. It looks small, but it is about 10 meters across or more.

If extraterrestrials did dock their vehicle with the ISS to conduct a meeting with NASA astronauts, it would not be the first time according to the claims of Clark McClelland.

I, Clark C. McClelland, former ScO [Spacecraft Operator], Space Shuttle Fleet, personally observed an 8 to 9 foot tall ET on his 27 inch video monitors while on duty in the Kennedy Space Center, Launch Control Center (LCC). The ET was standing upright in the Space Shuttle Payload Bay having a discussion with TWO tethered US NASA Astronauts! I also observed on my monitors, the spacecraft of the ET as it was in a stabilized, safe orbit to the rear of the Space Shuttle main engine pods. I observed this incident for about one minute and seven seconds. Plenty of time to memorize all that I was observing. IT WAS AN ET and Alien Star Ship!

Furthermore, McClelland wrote that he was not the only NASA official who witnessed the incident:

A friend of mine later contacted me and said that this person had also observed an 8 to 9 foot tall ET INSIDE the SPACE SHUTTLE CREW COMPARTMENT! Yes, inside OUR Shuttle! BOTH missions were DoD (Pentagon) TOP SECRET (TS) encounters!

McClelland’s testimony is significant due to his credentials gained over a 34 year career working for NASA contractors, and eventually NASA itself as a SpaceCraft Operator, before being forced to retire in 1992 due to his UFO beliefs. His website has a number of documents he has released to the public confirming some among the long list of achievements and testimonials arising out of his long NASA career. His claims of directly having witnessed events involving extraterrestrial life and technology while at NASA is first hand witness testimony that would be admissable in a court of law or Congressional Inquiry.

McClelland’s testimony supports claims that NASA space missions have directly interacted with extraterrestrial vehicles and resulted in meetings between astronauts and aliens. The video recording of what appears to be a UFO docked at the ISS on January 29, 2014, may be yet another instance when aliens have met with NASA astronauts during a space mission.

Read original article at:
Did a UFO dock with International Space Station for alien astronaut meeting?