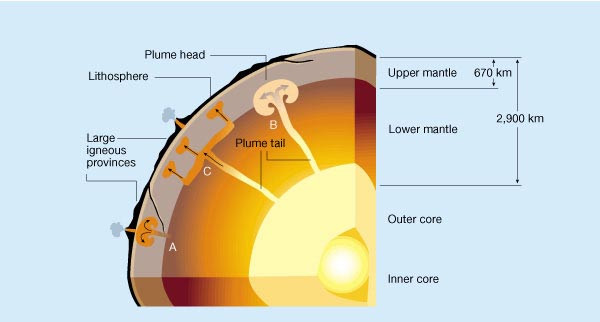 As I mentioned last week, the latest of breaking news discoveries affirms the overheating of Earth’s core caused by a weakening magnetic field, and a strengthening flow of charged particles which is part of a consortium of unfolding events which collectively leads to a natural cyclical…

As I mentioned last week, the latest of breaking news discoveries affirms the overheating of Earth’s core caused by a weakening magnetic field, and a strengthening flow of charged particles which is part of a consortium of unfolding events which collectively leads to a natural cyclical event. More on this in coming articles…

In some parts of the Earth, material rises upwards like a column from the boundary layer of the Earth’s core and the lower mantel to just below the Earth’s crust hundreds of kilometers above. Halted by the resistance of the hard crust and lithospheric mantle, the flow of material becomes wider, taking on a mushroom-like shape. Specialists call these magma columns “mantle plumes” or simply “plumes”.

Using a simulation with an unprecedentedly high resolution, Earth scientists from University of Paris VI and ETH Zurich have shown that magma columns in the Earth’s interior can cause continental breakup – but only if the Earth’s skin is already taut.

Geologists believe that plumes are not just responsible for creating volcanoes outside of tectonically active areas – they can also break up continents. The scientists offer the Danakil Depression (the lowlands in the Ethiopia-Eritrea-Djibouti triangle) as an example of this. This “triple junction” is extremely tectonically and volcanically active. Geologists believe that the so-called Afar plume is rising up below it and has created a rift system that forks into the Red Sea, the Gulf of Aden and Africa’s Great Rift Valley. However, the sheer length of time required, geologically speaking, for this process to take place, means that nobody is able to confirm or disprove with absolute certainty that the force of a plume causes continental breakup.

Evgueni Burov, a Professor at the University of Paris VI, and Taras Gerya, Professor of Geophysics at ETH Zurich, have now taken a step closer to solving this geological mystery with a new computer model. Their paper has recently been published in the journal Nature. The two researchers conducted numerical experiments to reproduce the Earth’s surface in high-resolution 3D.

These simulations show that the rising flow of material is strong enough to cause continental breakup if the tectonic plate is under (weak) tensile stress. “The force exerted by a plume on a plate is actually too weak to break it up,” says Gerya. In experiments using simple models, the researchers allowed the plumes to hit an unstressed plate, which did not cause it to break, but merely formed a round hump. However, when the geophysicists modeled the same process with a plate under weak tensile stress, it broke apart, forming a crevice and rift system like the ones found around the world.

“The process can be compared to a taut piece of plastic film. Weak, pointed force is enough to tear the film, but if the film is not pulled taut, it is extremely difficult to tear.” This mechanism has already been proposed in the past as a possible model for explaining continental breakup, but had never been outlined in plausible terms before now.

“We are the first to create such a high-resolution model which demonstrates how a plume interacts with a plate under tensile stress,” says Gerya. Fast and powerful computers and stable algorithms programmed by the scientists themselves were required for the simulations. The researchers benefited from technical advances made and experience accumulated by the ETH professor in this field over the past ten years.

In the model, the deformations are created quickly from a geological point of view. Rift systems several kilometers deep and more than a thousand kilometers long can form after “just” two million years. The processes are therefore up to ten times faster than tectonic processes such as subduction and 50 times faster than the Alpine orogeny, for example.

The idea of mantel plumes is widely disputed, with some researchers denying that they even exist. “I think it is much more likely that they do exist,” says Gerya. As is often the case in geology, especially when researching the Earth’s interior, such processes and phenomena like the existence of plumes cannot be observed directly. Furthermore, the periods over which geological processes take place are far too long for humans to experience first-hand. “So far, we have only been able to observe the effects that plumes have on the Earth’s surface and on the propagation of seismic waves in the Earth’s interior.”

The scientists are therefore reliant on good, realistic models that show the processes in a geological time lapse. How realistic the calculated simulations are depends on the parameters used. The plume-plate interaction model incorporated physical laws, the characteristics of materials in the Earth’s crust and mantle, and temperature and pressure conditions. “We know the rules, but humans generally lack the intuition to identify how they interact on geological timescales.”