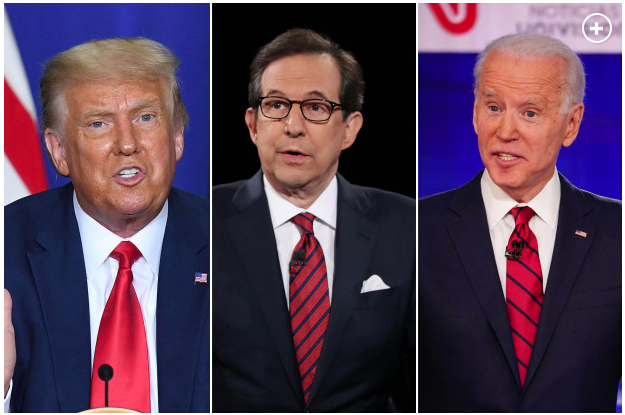 The first debate graphically proved what everyone already knew…

YOU CANNOT DEBATE
A DEMOCRAT

And, that the more ultra-liberal and hyper-progressive and extreme left-wing they are, the more every Democrat will resort to any vile and/or vicious debating tactic imaginable.

The American body politic just saw — IN LIVING COLOR– why the DNC gave Joe Biden the nomination.  He’s a real pro where it concerns prevarication and equivocation, misrepresentation and fabrication, distortion and falsification.

But the essential point here is that you cannot debate a Democrat because they will never debate the true facts and figures.  That’s because they know the truth will always work against their narrow, selfish interests.

Where it concerns the Left, how can one ever debate with people from whom the God-given faculty of reason has fled?  Not only is there no common sense to be found anywhere on the Democrat reservation, there exists absolutely no conscience there either.

Any rational person, then, would want to avoid going anywhere near a debate with a liberal, particularly those who are certified with Trump Derangement Syndrome like Joe Biden.  Those hapless folks would rather sit in their stew pot of sheer mendacity, spewing falsehoods in every direction — 24/7 — than acknowledge even a modicum of truth.

What follows is a summation of facts pertaining to Joe Biden’s debate performance, which ought to be evident to every astute observer by now.

FACT: When Biden moves his lips, he’s lying.  When he speaks again, he’s lying about the lies he just told.  Even a cursory look at his record reveals a hardcore, lifelong pathological liar.  That’s why he was chosen decades ago to run for POTUS so many times.

FACT: Biden reflexively denies the obvious truth and proven facts about every instance of his documented criminality and corruption.  Really, how else can he explain or defend against his indefensible record of criminal activity and rampant corruption and corrosive influence on American politics.

FACT: Biden’s primary response in any debate is the cowardly ad hominem attack.  Because his brain is not capable of holding an iota of truth, it only knows how to scurrilous attack his opponent whenever confronted with the damaging truths.

FACT: Biden’s utterly fake avuncular image — “Crazy Uncle Joe” — was meticulously sculpted over decades for this very moment.  He tries to come off as a benign old man when he is, in reality, an extremely dangerous politico who will do or say anything to advance the New World Order agenda.

FACT: Each response from Biden during the debate unequivocally indicated that he is a perfectly controlled puppet of the NWO globalist cabal. Each of his reactions clearly showed that he is a willing pawn of the power elite.  Whatever his hidden paymasters want of him, he will perform unflinchingly.

FACT: Biden’s debate performance was an extraordinary demonstration of the power of mind-altering drugs. Not only did his eyes expose the fact that he was on powerful psychotropic drugs, his unusual ‘self-control’ in the face of withering attacks on his credibility reflected powerful pharmaceutical interventions (which is why President Trump had demanded Biden be drug tested in advance).

FACT: Every single statement that Joe Biden made last night was canned and rehearsed but not to address the questions and issues; rather, to use the platform to falsely accuse Trump of any and every wrongdoing he was told to blame him for.  His was an egregious exercise in character assassination and slander…which is why Trump reacted so aggressively.

FACT: Biden could be seen cheating in two conspicuous ways: he was wearing an ear piece; and he kept consulting prewritten notes with all sorts of talking points and false facts that were periodically blurted out.  With much regularity, the hopeless cheater could be seen consulting the notes he illicitly brought to the debate venue.  Likewise, his telling eye movements frequently indicated that he was secretly listening to his debate coach through an ear bud.

*It should be noted here that Joe Biden has been caught plagiarizing more than any other politician in U.S. history.  Even the mainstream media has outed him for his serial acts of what were extraordinarily reckless and brash instances of plagiarism.

The comment sections, chat rooms, political forums and blogs — ONLY MINUTES INTO THIS DEBATE — were all echoing the same irrefutable sentiment, Trump not only debated Biden, he also had to debate so-called moderator Chris Wallace.

Wallace is a well-known globalist hitman and pitchman selected by FOX News because of his highly dubious pedigree.  His father, Mike Wallace, was the valued New World Order investigative journalist who the globalist would use to terrorize any target with the highly influential 60 Minutes platform whenever he was ordered to.  What else needs to be said?!

It was all too clear from the outset of the debate that Wallace would use the “prick and prosecute” tactic against Trump.  First, he would denigrate Trump either subtly or sharply; then he would use that episode to browbeat him throughout the rest of the debate.  Wallace did this constantly knowing it would only infuriate Trump and get him to not follow the debate rules.

But how exactly did Wallace prick Trump? By reciting proven lies about Trump specifically misquoting him in the most foul way.  Wallace had the chutzpah to begin the debate with the fake ‘white supremacist’ quote that Trump never made.  After dropping this bomb, the biased moderator then proceeded to drop one bomb after another on Trump each one designed to trigger him.  Wallace even tried to prevent Trump from rebutting the false statements after half the electorate heard them.

Obviously, the softball questions Wallace lobbed Biden’s way only further angered Trump and this repeated injustice was put in his face quite purposefully.  The furtive debate managers knew that Trump would react to this which he did time and again.

As for the time allocated to both Trump and Biden, it was clear that whenever Trump was hitting the mark, Wallace would abruptly cut him off.  And the more sensitive the issue, the quicker Wallace unfairly provided cover to Biden.

Whereas Trump was constantly given short shrift whenever it concerned his speaking allocated time, Biden was routinely given more uninterrupted time to speak.  It was as though Wallace was commanded to set up each context for Biden’s juvenile ad hominem attacks.

Biden was also permitted to radically depart form the topics of the six components of the debate outline.  He did this in a manner as though he really did know what that outline was in advance.  It was as though every single word out of Biden’s mouth has been scripted beforehand with the awareness of the debate content.

Truly, given the serious impairment of Biden’s mental faculties and cognitive skills, his choreographed performance had to have been recited multiple times.  There’s simply no way he could have gotten through this ordeal except with the concealed support of the entire operation.  In other words, Biden functioned with the confidence of knowing everyone had his back, especially the transparently biased moderator Chris Wallace.

KEY POINT: There’s an old adage that goes like this: “there’s only one way to deal with a psychopath—YOU DON’T”.   Similarly, there’s ONLY one way — ONE WAY — to effectively debate an ever-deceitful Democrat.

YOU DON’T DEBATE THEM

As soon as Trump got on the same stage as Biden, he put himself in great danger on a completely foreign battlefield.

The globalists totally own and operate every debate venue in America.  Before this unmitigated disaster of a debate, Trump knew that, Biden knew that, and Wallace knew that.

Nevertheless, Trump courageously entered their fully controlled battleground not knowing what “slings and arrows” would come his way.  Given that impossible situation, he had no choice but to become the proverbial “bull in the china shop” knocking down the whole place—again and again, which he did.

Really, what else could Trump do?

If he played nice, they would have trampled all over him; hence, his only way out of absolute annihilation was to launch one pre-emptive or retaliatory attack after another, which he did.

While this strategy served to only harden the liberals against him, Trump already knew the radical Left will not be converted between now and Election Day.

Perhaps what Trump really wanted to accomplish by sharing a HUGE public platform with such a nefarious character as Joe Biden was to expose him.  And, expose Biden he did.

Regardless of whether the viewer was cognizant of what they saw and heard last night, they witnessed the real Joe Biden.  The former VPOTUS unwittingly revealed himself to be an exceedingly malicious and malevolent character who is as unscrupulous as they come.

Many good folks may have not been aware in the moment, but Biden showed himself to be an utterly shameless and repugnant and reprehensible politician of the highest order.  Together with the equally odious Kamala Harris, this 21st century version of Bonnie and Clyde will attempt to steal everything in sight should they prevail on November 3rd.

In point of fact, a Democrat tyranny under Biden and Harris will be remarkably similar to the notoriously lawless, corrupt, anarchic and crime-ridden two terms under the treacherous Manchurian Candidate Barack Hussein Obama.

Given that Trump has spent nearly four years as a wrecking ball knocking down the Obamanation, these debates will serve to underscore just how much damage Obama and Biden did to the country.  And, just how critical it is that these closet communists not be given another chance to destroy the American Republic.

Bottom Line: Our best advice to President Trump is to NOT show himself anywhere within a 1000 miles of Joe Biden.  The guy is dangerous to the extreme!  Our counsel would be that Trump skip the next 2 debates, and tell the whole world why he cannot expose himself to such a bad actor and notorious criminal.  By giving Biden the opportunity to disparage him with so many false derogatory statements, this political analyst strongly feels that the relatively few undecided voters in the middle may be swayed to vote Democrat.  In such a tight race, especially in our swing state like Florida, every vote counts.  Biden & Company will attempt to peel off every Independent voter they can, as well as manufacture votes for Biden-Harris in those Democrat-controlled counties where they have always fixed the election outcomes.

Editor’s Note: SOTN firmly believes that the best way out of these nakedly rigged debates for Trump is for him to cast Biden as the proven career political criminal that he truly is.  Why would Trump even want to be in the same building with such a villainous character as Joe Robinette Biden (even his middle name betrays his perennial “robbing” the public blind) See: UNITED STATES CODE: Joe Biden is permanently disqualified from holding any public office in the U.S. Federal Government
___
http://stateofthenation.co/?p=29870