The C.I.A. created the ‘Conspiracy Theory’ meme
to shut down the Truth Movement
in anticipation of the
COVID-1984 era 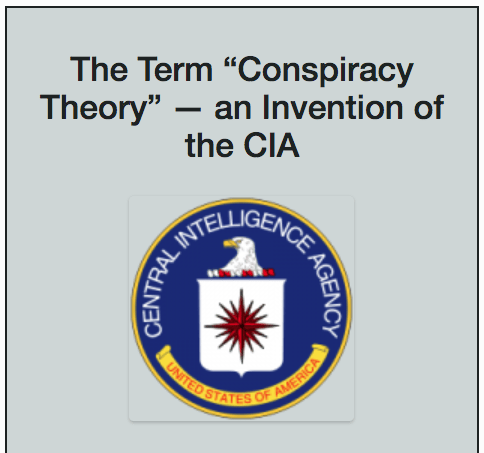 The truth is that everything is a conspiracy—EVERYTHING ! ! !

You’d be hard-pressed to find anything on the front page of the New York Times and Washington Post, or on CNN and MSNBC, that’s not a conspiracy.

Not only were the state-sponsored, false flag terror attacks on 9/11 one of the biggest conspiracies ever, because the culprits were never apprehended, prosecuted and incarcerated, the very same perps did OPERATION COVID-19.

How’s that for a very bonafide conspiracy? Now for a quick reality check.

OPERATION COVID-19 is a
State-Sponsored Global 9/11 via a
Series of False-Flag Bioterrorist Attacks
and Multiple Manmade Mass Casualty Events,
Planned as a Fake Pandemic and Staged Panic to
Greatly Advance the New World Order Conspiracy
to Establish a Totalitarian One World Government

The preceding narrative about OPERATION COVID-19 has become more obvious by the day to countless investigative journalists, medical researchers and armchair analysts.

As a matter of fact, this worldwide Gladio* black operation has become so transparent that folks everywhere, who were previously asleep, are now even waking up.[1]

To recklessly label so many blatant crimes and unprecedented irregularities which have occurred throughout this fake pandemic as conspiracy theory is both absurd and juvenile. And everyone knows it; even those who are paid well to push the ridiculous NWO globalist narrative known by truth seekers as THE GREAT SCAMDEMIC.

So, when anyone ever responds with the “conspiracy theory” rebuttal, just answer them with the following irrefutable truth.

Nowadays, everything is a conspiracy;
there’s practically nothing in the news
that’s not.

KEY POINT: While OPERATION COVID-19 refers to the ongoing series of Zio-Anglo-American bioterrorist attacks which began in Wuhan, China and continues throughout the world community of nations, COVID-1984 is the next phase of this grand conspiracy to lock down planet Earth via WHO-administered Medical Martial Law. Within the context of Problem~Reaction~Solution, OPERATION COVID-19 fabricated the “Problem”, COVID-1984 will serve as the “Reaction”, and a One World Government will be proposed as the “Solution”. In other words, COVID-1984 will provide the visible rudiments for the emerging Global Control Matrix that will effectively function as a Global Security Superstate.

Now here’s a serious reality check
on conspiracy theories, of which
most are very real.

Virtually everything reported by
the mainstream media (MSM) is
the result of a highly organized
conspiracy.

Everything you read in or hear about
from the CIA’s Mockingbird Media
is the product of a premeditated and
well-planned conspiracy.

In other words, all corporate news is
nothing but a rehash of various
conspiracies hatched and carried out
by the NWO globalists, Deep State,
the International Banking Cartel,
Committee of 300, or some other
organized crime syndicate or secret
society.

Said another way, everything that’s
happening in 2020, as reported by
the legacy media, is but a shadow of
a meticulously designed conspiracy
of some sort.

Then there is this starker reality: the
vast majority of MSM-covered
conspiracies are actually complex
criminal conspiratorial plots. This
fact means that all of the major
corporate media are criminal
co-conspirators in each and every
crime spree.

Because each convoluted criminal
conspiracy is becoming more extensive
and complicated and impactive than
those previously, every form of media
is being enlisted to collude and execute
the cover-ups.

Even many Alt Media platforms now
operate under the rubric of Project
Mockingbird. Some of those news sites
do so unwittingly; others are paid
controlled opposition or co-opted in
other stealthy ways.

The bottom line here is that the
mainstream media plays a key role in
every international crime wave. Not
only are they essential to maintaining
the cover-ups — 1000s of them —
each MSM organ of propaganda and
prevarication is a criminal accomplice
in the commission of the criminal
activity.

One of the primary means by which
the perps have gotten away with these
multi-century criminal conspiracies
is by throwing around the “conspiracy
theory” label.

Once the Tavistock Institute sent that
little meme over to The Company after
the C.I.A. assassinated JFK, they never
again had to worry about policing the
cover-up; the American people would
do that for them by mocking all the
truth seekers as conspiracy theorists.

Now fast forward to OPERATION
COVID-19. The perps again have
citizens everywhere wearing masks,
social distancing and sheltering in
place. The same fearful ones are even
demanding a vaccine despite the fact
that it will never work and will be
quite toxic and harmful.

This is how the Truth Movement will
be kept in check. Every revelation of
truth or deviating fact will be met with
derision associated with the folks who
really do wear tinfoil hats … … … … …
unless patriots everywhere step up to
the plate ready to swing their bats
like there’s no tomorrow. 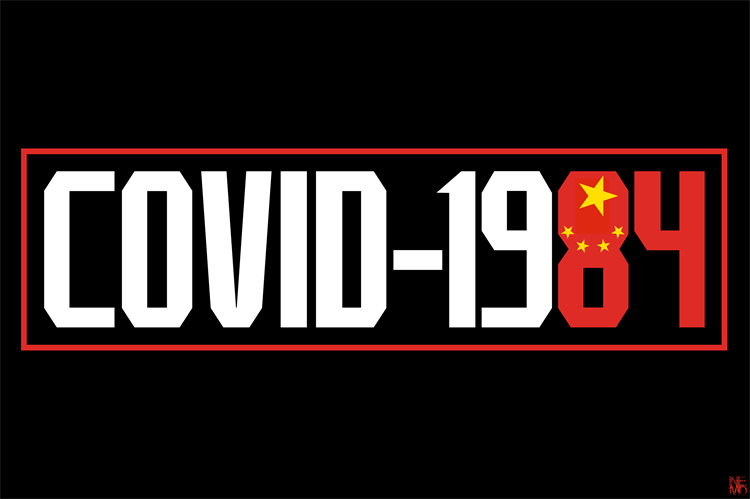 Truly, it does not get any bigger than OPERATION COVID-19… … …until you understand COVID-1984 and the New World Order end game known as One World Government run as an uncompromising dictatorship. As follows:

“Just like the state-sponsored 9/11 false flag operation was used
to create the American National Security State, COVID-1984 is
being carried out to foist a Global Security Superstate on the entire
planetary civilization as a precursor to a One World Government.
Every single move made by the New World Order globalist cabal
during the execution of this staged pandemic and global psyop
has been planned well in advance. That’s because COVID-1984
represents the culmination of 100 years of biowarfare waged
against the human race. It’s not just a depopulation bioweapon
as the 1918 Spanish flu was. Watch every twist and turn of this
classic Problem~Reaction~Solution operation, especially as it’s
falsely reported by the CIA’s Mockingbird Media. Clock every
NWO outcome, both big and small, as each piece fits perfectly
into the pre-planned COVID-1984 puzzle. That’s why it’s been
memed the “Plandemic” … as well as a THE GREAT SCAMDEMIC.
(Source: COVID-1984: ‘A Global 9/11’ to Inaugurate a Global
Security Superstate)

SPECIAL NOTE: The “Conspiracy Theory” label was created for this very moment

It’s of paramount importance to understand that: Over a Century of Biowarfare Culminates with the Launch of the COVID-19 Bioweapon, Manmade Coronavirus Pandemic and Staged Global Panic.

Only with this crucial knowledge is the “Conspiracy Theory” label seen in its it proper light. Not only is this potent weapon prominently configured within the NWO arsenal, it is integral to the whole COVID-1984 scheme of things. In other words, Big Brother is not only Bill Gates, it every other human being they can turn against the truth speakers. See: MARK OF THE BEAST: Brought to you by everyone’s Big Brother ~ BILL GATES ~

As a matter of historical fact, the globalists could not have accomplished what they have up until now without fine tuning the effectiveness of the “Conspiracy Theory” label over many decades. Exactly what has the NWO globalist cabal (and International Banking Cartel & Crime Syndicate) gotten away with since the Federal Reserve Act of 1913? How about these monstrous genocidal conspiracies:

The Armenian Genocide,
World War I,
Bolshevik Revolution,
Spanish Flu Genocide,
The Great Depression,
World War II,
The Holocaust,
9/11 Terrorist Attacks,
The War on Terror,
and COVID-19 Pandemic
all have one thing in common.
They were all funded by the
International Banking Cartel & Crime Syndicate.

There has never been a more wide-ranging and consequential criminal conspiracy carried out against all of humanity than the COVID-19 fake pandemic and staged panic—OPERATION COVID-19.

Just like the utterly nonsensical 9/11 Commission Report was a remarkably insane conspiracy theory, so too is the ever-changing government coronavirus story of 2020. Once this indisputable fact is widely known, anyone who is on the wrong side of the fence will be compelled to reconsider everything they have bought into about this COVID farce.

For starters, here’s A Comprehensive Series of Exclusive Exposés, Big-Picture Analyses and Health Warnings pertaining to OPERATION COVID-19. Any objective reading of this voluminous material will surely convert anyone who still believes the fearmongering MSM’s fake news regarding the so-called coronavirus pandemic.

Once a critical mass of people becomes aware of this highly premeditated and murderous Plamdemic, citizenries everywhere can begin the process of purging all the traitors from government as well as prosecuting all co-conspirators both foreign and domestic.

CIA Dispatch dated April 2, 1967 indicating the policy of “countering
and discrediting the claims of the conspiracy theories” concerning the
assassination of President John F. Kennedy (see blue-dot highlight below). 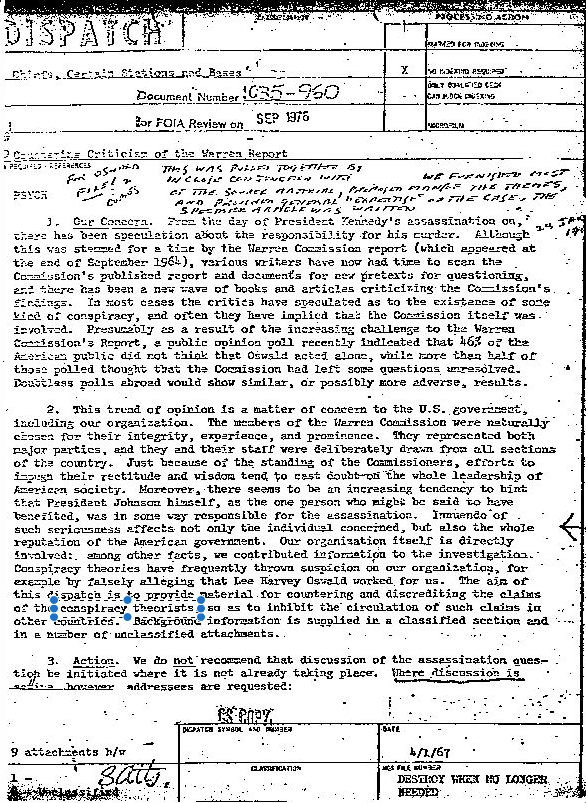