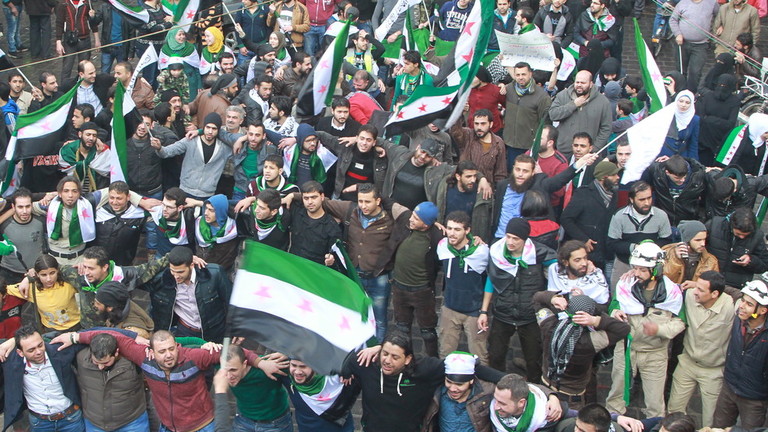 While US President Donald Trump may be serious about pulling troops out of Syria, that doesn’t mean Washington intends to stop meddling there, as evidenced by taxpayer dollars he just sent to the fake rescue group “White Helmets.”

The White House announced a $4.5 million donation to the group on Tuesday, citing the “important and highly valued” work the group has done rescuing “more than 115,000 people” over the course of Syria’s 8-year conflict. Left unsaid was that the number comes from the White Helmets themselves; or that they were only set up in 2014; or that they only operate in parts of Syria controlled by anti-government militants, while the actual Syrian civil defense has been placed under US sanctions along with everyone else loyal to Damascus.

In this narrative, the White Helmets are neutral, noble civil servants volunteering all over Syria to save children and puppies and kittens from the Evil Bashar Assad, under the rain of “barrel bombs” and chemical weapons targeting exclusively civilians and the ever-increasing number of hospitals.Mentioning any of those things would be introducing complications into the simplified morality play that has been sold to the American people since 2011, when US officials encouraged “Arab Spring” uprisings across the Middle East and North Africa – including Syria, where they turned into a brutal sectarian conflict.

In reality, Assad is Syria’s legitimate president, the rescues as well as “chemical attacks” and “barrel bombs” increasingly appear to be fabrications, and the outfit itself is but an extension of jihadist militants such as the Al-Qaeda affiliate Jabhat Al-Nusra, recently “rebranded” as Hayat Tahrir al-Sham (HTS).

Actual Syrians liberated from jihadist sieges and occupation have repeatedly testified that the “rescuers” are nothing of the sort – including the family of the famous “Aleppo Boy” Omran Daqneesh.

Last December, the Russian mission to the UN presented the results of its months-long investigation into the group, citing photos, documents and witness testimonies to accuse the White Helmets of organ harvesting, ties to terrorist groups, staged attacks and faked rescues.

“The White Helmets deserve to be on the United Nations’ designated terrorist list,” said the Russian envoy to the UN Vassily Nebenzia.

The US and its allies have gone through a variety of mental contortions to whitewash them as “moderate rebels” or tolerant secularists, who just happen to be called “Army of Islam” and so forth. The very same media then turned on a dime to denounce these militants last week, after they invaded northern Syria on Turkey’s behalf to target the US-allied Kurds.The US has been one of the group’s biggest donors, and has even honored them with an Academy Award for a “documentary” of their greatest hits. Meanwhile, the US military presence in Syria was authorized by stretching the framework of a congressional mandate originally given to fight Al-Qaeda terrorists following the September 11, 2001 attacks. Washington thus found itself both fighting and funding terrorists – a quandary the Obama administration never bothered to address, because it was never really challenged on it.

Trump used the invasion as the pretext to withdraw US troops from the area, telling the American public he wants to end the endless wars in the Middle East that have claimed countless lives and trillions in treasure. His critics on both sides of the aisle have howled and gnashed their teeth about this “betrayal” – they say of the Kurds, but really mean their dreams of empire – while Trump’s base cheered it on. Reactions to the White Helmets aid are precisely the opposite, with Trump voters grumbling about funding terrorists and the establishment applauding it.

The heroic #WhiteHelmets operate at great personal risk, having been repeatedly targeted by the #AssadRegime and its #Russian backers, and I thank them for their selfless sacrifice.

Funding fake terrorist “rescuers” while trying to disentangle from Syria seems nonsensical at first glance. It starts making a bit more sense when considering that it keeps the Washington “swamp” happy and off Trump’s back – at least a little – while also leaving him some leverage to meddle in Syria down the line, if he so wishes. A bargain at $4.5 million, compared to the cost of maintaining a military presence, the businessman in the Oval Office might be thinking.