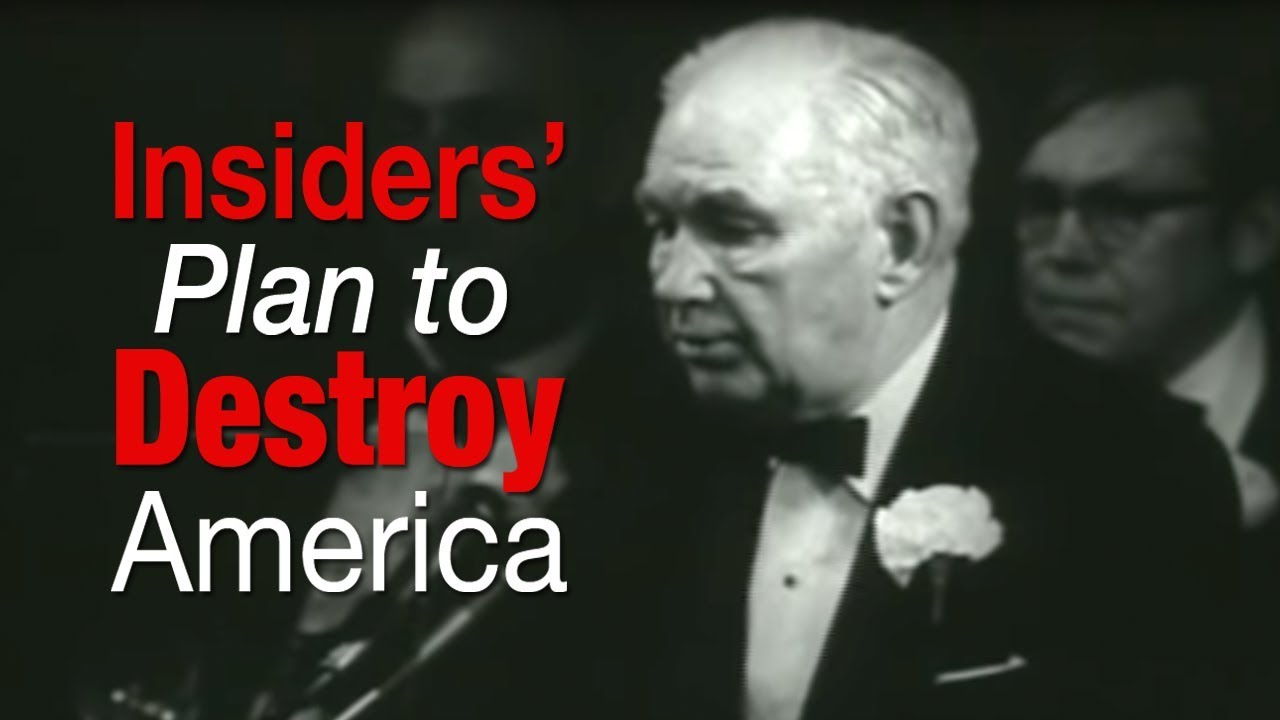 Globalist Take Over of America

Proof that the NEW WORLD ORDER has been planned by the elite. Robert Welch, Founder of The John Birch Society, predicted today’s problems with uncanny accuracy back in 1958 and prescribed solutions in 1974 that are very similar to Ron Paul’s positions today. This is proof that there are plans in place by the elite to systemically disassemble US sovereignty. You can think for yourselves as to who is behind all of this.

WHATEVER ELSE CALL HIM ‘CORRECT’

A LEGACY OF ROBERT WELCH’S INSIGHTS

1958 Speech
You are a part of that plan of course, which is to induce the gradual surrender of American sovereignty piece by piece and step by step to various international organizations of which the United Nations is the outstanding but far from the only example.

Now, here are the aims for the United States.

2] hire and then much higher taxes

3] an increasingly unbalanced budget despite the higher taxes

4] wild inflation of our currency

6]greatly increased socialistic controls over every operation of our economy and every activity of our daily lives. Tis is to be accompanied naturally and automatically by a correspondingly huge increase in the size of our bureaucracy and in both the cost and reach of our domestic government

7] far more centralization of power in Washington and the practical elimination of our state lines. There is a many-faceted drive at way to have our state lines eventually mean no more within the nation than our county lines do now within the state’s

9] a constant hammering into the American consciousness of the horror of modern warfare. The beauties and the absolute necessity of peace, peace always on communist terms of course

10] the consequence willingness of the American people to allow the steps of appeasement by our government which amount to a piecemeal surrender of the rest of the free world and of the United States itself.

Looking 15 years into the future …

So, brush the insiders dust out of your eyes my friends, and the Communists soapsuds out of your brain, and ask yourselves in all honesty ‘What on earth is wrong with the United States simply minding its own business or, with having its foreign policy function primarily for the safety and benefit of the American people?’ Which is exactly what we had done for the first 140 years of our existence as a nation to the incredible advantage of ourselves that everybody else, everybody that is except a numerically small clique of power lusting conspirators who had somehow inflicted themselves on a gullible world.

While we turn to a very brief summarization of what we hope the John Birch Society will help and even sometimes lead the American people to accomplish during the next 15 years.

2]we must once again make our money freely redeemable in gold at some realistic price, and we must take all practicable legislative steps to prevent a recurrence of the enormous thievery and other subversive crimes that have been perpetrated on the American people through a contrived inflation by every president from Franklin Roosevelt through Richard Nixon.

3] we should reduce the number of government viewers, of government civilian employees, and the whole quantity of government by at least fifty percent, and we should achieve at least this much reduction in proper fashion through gradually convincing a majority of the American people of the wisdom of such a course.

4] we should withdraw all American troops from every spot on earth that is not American soil except when and where such troops may be required as decided by congress to protect American lives and property from criminal vandalism.

5] we should get government out of the areas and functions and activities where government does not belong. Again all steps to this end should be taken gradually but nevertheless just as rapidly as enough of the American people can be persuaded to support such progress, and in such achievement will require a truly massive educational force but that’s exactly what we hope to build during the next 15 years.

We can go ahead for at least a hundred number items but the John Birch Society will undoubtedly be working on more than that many specific projects, which will be laid out in its bulletins before another 180 months will have rolled around, and all of them will fit into all of these projects will fit into the general pattern indicated by the five major objectives listed above

So, let’s really wind up this marathon monologue with one final thought. None of us can guarantee anything about what the future will bring your speaker knows what a job we have before us to rid our country of the scourge of communism within the next few years, and then to go ahead on our constructive program so well that 15 years from now we shall already be entering an era of far less government, of a much sounder sense of responsibility, and with God’s help of a better world but I sincerely believe that it can be done and this much I know. If every man and woman in this audience should leave here tonight feeling in his or her own mind and heart that it can and must be but must be done then it surely will be.

And so, all of you Patriots of good character good conscience and noble ideals whom we can reach with the filmed version of this speech in a thousand other audiences it is with a great deal of confidence and energizing will to win that we invite you to join us in our epic undertaking but all of you great wonderful friends in this present audience, I certainly extend my very deep thanks indeed for so much patience and attention. Thank you.