CA WILDFIRE SEASON: First they predict the fires, Then they start the fires, Next they spread the fires The Saddleridge fire in the northern foothills of the San Fernando Valley on Friday, chewing through 7,500 acres, burning at least 31 structures, including homes, and forcing thousands to flee.

CA WILDFIRE SEASON: First they predict the fires, Then they start the fires, Next they spread the fires

A wind-driven brush fire carved a devastating path in the northern foothills of the San Fernando Valley on Friday, chewing through 7,500 acres, burning at least 31 structures, including homes, and forcing thousands to flee.

The Saddleridge fire, which broke out about 9 p.m. Thursday on the north side of the 210 Freeway in Sylmar amid strong Santa Ana winds, spread rapidly westward into Porter Ranch and other communities. At its peak, the blaze was moving at a rate of roughly 800 acres an hour. The fire is 13% contained. 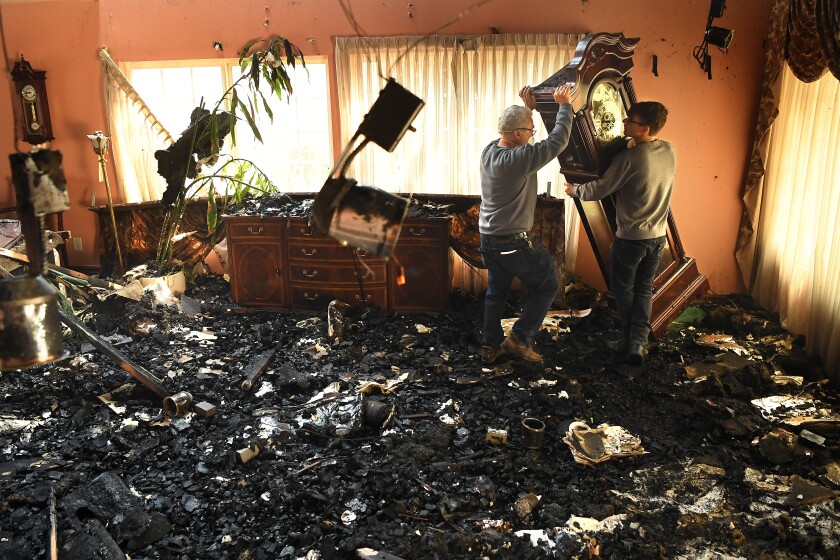 Mandatory evacuations were issued overnight to roughly 23,000 homes encompassing a large swath of neighborhoods north of the 118 Freeway from Tampa Avenue all the way to the Ventura County line — an area covering 100,000 residents. Officials warned that other communities near the fire need to be ready to leave at a moment’s notice if the winds shift.

“Those individuals placed not only themselves in imminent peril, but they placed first responders such as police and fire officials in that same perilous condition because of our need and desire to go in and try to rescue them,” Moore said.

The LAPD is escorting evacuees for five-minute visits to their homes to collect medicine, important documents and small pets.

One firefighter suffered a minor injury to his eye while battling the blaze, and a man in his late 50s died after suffering a heart attack while talking with firefighters early Friday, officials said. Authorities could not confirm reports that the man was trying to fight the fire from his home before he was stricken.

More than 1,000 firefighters from multiple agencies continued attacking the blaze from the air and ground Friday afternoon. Thick smoke choked the San Fernando Valley as motorists struggled to navigate around freeway closures, snarling traffic in the region.

Helicopters and amphibious firefighting aircraft known as “super scoopers” soared through the air dropping water, while ground crews manned bulldozers cutting containment lines into nearby hillsides in an effort to slow the fire’s spread. At least one air tanker blanketed fire retardant across the ridges between Granada Hills and Porter Ranch.

Andre Boghoskhanian stood outside his home on Via Urbino in the Renaissance community in Porter Ranch on Friday watching as a helicopter dropped water on a nearby ridge. A few weeks ago, he said, crews cleared out brush along the hillside.

“It was good timing,” he mused. After all, it was that fire break that stood between his home and the flames dancing up the hillside.

“The fire guys say they can hold it back from here. These winds though. I remember it was like this in 2008,” he said, referencing the Sayre fire that burned near Sylmar that year, destroying nearly 500 homes.

The Sayre fire was among the most destructive wildfires in the city’s history.

Though conditions appeared to be improving, low humidity and northeasterly winds gusting up to 50 mph — expected to linger until the evening — still pose a challenge for firefighters. Officials say they expect it will take days to get the blaze completely under control.

Porter Ranch is “basically the hot spot right now,” Silverman said. “We’re trying to keep it boxed in above the 118 Freeway. Obviously that’s a good fire break for us, but if the winds shift to the south, then that would be into Chatsworth.”

Overnight, the fire moved so quickly that it jumped into neighborhoods before firefighters and police could warn residents.

In Porter Ranch, a man stood in the dark, staring as waves of embers crested against a two-story home abutting a hillside on Sheffield Way. Flames lapped at the back of the structure.

“That’s my home,” he said. He had gotten out 15 minutes earlier.

Flames had already reached a second home on the cul-de-sac, which was blanketed with thick, gray smoke and punctured only by the high beams of fleeing cars speeding through the small streets that crisscross the hillsides.

The momentum of the wind-whipped blaze took many by surprise.

After her husband went to bed Thursday evening in their Granada Hills home, Patricia Strucke flicked on the 9 o’clock news and saw flames. The 79-year-old retired nurse started to feel sick as she watched the broadcast from Calimesa, thinking of the families some 90 miles away whose homes were at risk.

“Your house can be gone in five minutes,” she remembers thinking. “I can’t watch this. It’s too horrible.”

She walked into the kitchen and put her empty glass in the sink. Then, she looked up. Through her kitchen window, she saw a glowing red semicircle licking at the hills.

She rushed to wake her husband, Edward, 77, who uses a wheelchair, warning him they may need to evacuate. She packed up their medications and threw them into the back of their van, but noticed that the fire seemed a bit smaller.

Officials didn’t come by knocking or blaring, “Evacuate now!” on loudspeakers like they had during past fires in the area, but Patricia kept checking outside. Around 11:30 p.m., as the deep-red flames were chewing down a hill about 200 yards from their home, she barged into the couple’s bedroom.

Edward slipped on shoes and got into his wheelchair. Outside, ash rained down on the home they’d lived in for 45 years.

As they drove away, Patricia realized she’d forgotten her husband’s most important medication, an anti-coagulate, but it was too late to go back. She thought, too, of the many memories they’d made inside the home now shrinking in the rearview mirror. She thought of her two grandchildren, now teenagers, and how they’d learned to swim in their backyard pool. She thought of the times they came over after school to do homework or when they helped tend her tomato plants. She thought of all the holidays, all the times she’d made fudge in her kitchen.

“Am I going to have a home?” she thought.

Around 8:30 a.m. Friday, a neighbor called to say that he’d managed to get close to their house. Everything was ashy and the air was still choked with smoke, but the home seemed safe, he told her. Relief washed over Patricia. But she said she knows embers can change things quickly. 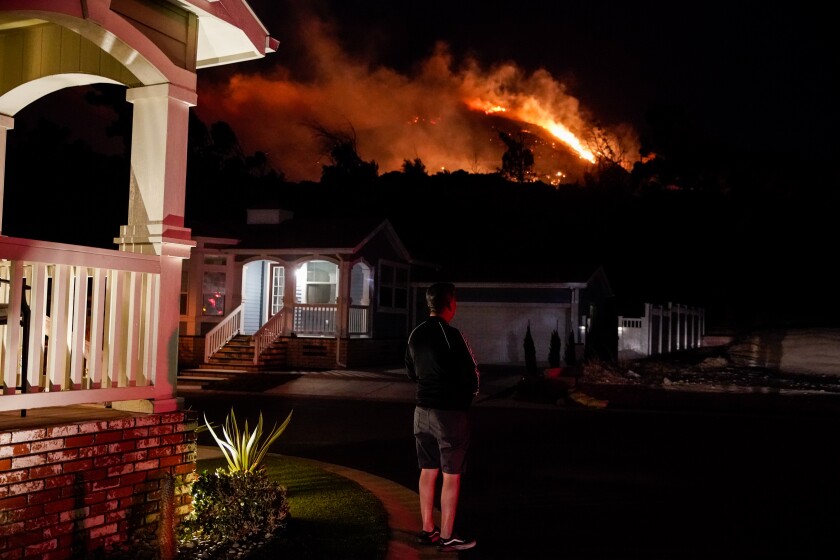 Cece Merkerson first noticed an orange glow from the living room of her third-story apartment in Porter Ranch about 11:30 p.m. Thursday. She had heard a fire was raging in nearby Granada Hills but figured it was a safe distance away.

She checked the TV news, but there wasn’t an evacuation order for Porter Ranch. To calm her nerves, Merkerson started packing anyway: medication, a small safe with important papers, a change of clothes and a couple of bananas.

Around 2 a.m., Merkerson looked through her window and saw flames. The mandatory evacuation order was issued minutes later.

“I started knocking on all my neighbors’ doors because I knew they were sleeping,” she said. “I’m banging and banging and I woke up about eight of them — and they all looked at me like I was crazy.”

Mitza Mendoza, 44, had already been asleep several hours when she heard what she assumed was an Amber Alert going off. She was groggy and didn’t check her phone. But then, sometime around 1 a.m., she woke to the smell of smoke inside their Porter Ranch home. Then another alert came through.

“Mandatory Evacuation,” it read. She panicked.

The couple rounded up their four young children; their English bulldog, Mr. Wrinkles; and Mitza’s father. They packed a change of clothes for the kids and their passports and headed for the garage, which was quickly filling with smoke.

Their street was choked with honking cars, as people tried to alert any still-sleeping neighbors. The family headed to the Granada Hills Recreation Center and spent the night there.

“I’m so glad we are safe,” Roberto Mendoza said in Spanish. “The house can be replaced. Our lives can’t.”

Kim Thompson, who lives at the intersection of Sesnon Boulevard and Jolette Avenue in Granada Hills, said she took her dog out at 10 p.m. Thursday and immediately smelled smoke. She evacuated two hours later as the flames roared closer, taking only her dog with her. Later, she admitted, she doubled back to retrieve a bottle of wine.

Her neighbors were less willing to leave, staying back to spray their homes down with water.

“You’re on edge. You think you get used to it,” Thompson said, the wind whipping eye-stinging smoke and ash through the air, “but you can’t really get used to this.”