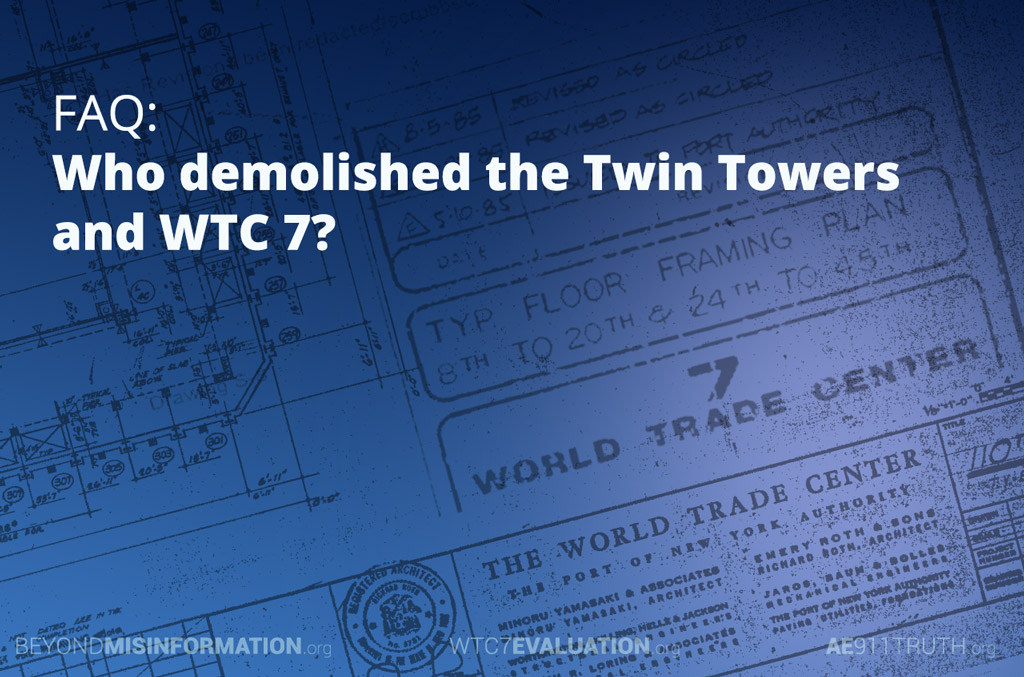 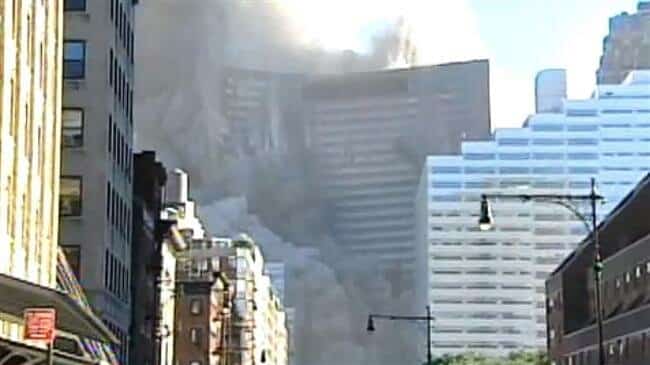 [ Editor’s Note: We were expecting new confusion being published on 9-11 this year, and were not disappointed, but this piece on fire not being the cause of Building 7 coming down was stand up comedy, like everybody already knew that.

That said, any pressure to reopen 9-11 has to continue so the fear of exposure by the real perpetrators never goes away.

And we are not holding our breath for any of the myriad of presidential candidates making it a key campaign plank, although it would be good to back them all into making a public refusal so we have the growing admission “I don’t care” list.

Every year we collect more and more confirmation of our nuclear 9-11 that VT owns lock, stock and barrel, although we are still waiting for any major media organization to interview us or one of the well funded stink tanks to want to debate it with the cameras recording.

The new German material this year was a pleasure to have, solid independent work that we did not know of until it was completed. But the old 9-11 has a lot of competition.

By that I mean all the “mini-911s” going on now compliments of the great Unipolar power plus Israel and many of the NATO countries having adopted proxy terrorism as a foreign policy tool.

The UN has somehow escape all responsibility for its ignoring this all going on. It has had a front row seat while collecting paychecks with top benefits including pensions that are to die for. They don’t want to rock their own boat.

Has the UN in New York ever been picketed for its refusal to reform itself? Where are all the groups that used to protest there over all kinds of issues as it was easy to get media coverage for their issue that way? If the UN will not reform then we at least need a new “Multi-Polar UN” to compete with and eventually antiquate the original… Jim W. Dean ]

A comprehensive study conducted by the Department of Civil and Environmental Engineering at the University of Alaska Fairbanks (UAF) in association with Architects and Engineers for 9/11 Truth found that fire was not the cause of the collapse of the Building 7 of the World Trade Center (WTC).

The official theory established that the 47-story colossus collapsed on its base after the tragic attacks of Sept. 11, 2001, at 5:20 p.m., when it was affected by the fire coming from the Twin Towers—Buildings 1 and 2 of the World Trade Center. The building was completely destroyed in just seven seconds.

However, after investing four years in computer simulations, the FAU scientists published a draft report that concludes that the collapse of the third WTC skyscraper on Sept.11, 2001 was not due to any fire, but “the almost simultaneous failure of every column in the building.”

“Despite calls for the evidence to be preserved, New York City officials had the building’s debris removed and destroyed in the ensuing weeks and months, preventing a proper forensic investigation from ever taking place,” Architects and Engineers for 9/11 Truth explained on its website.

“Seven years later, federal investigators concluded that WTC 7 was the first steel-framed high-rise ever to have collapsed solely as a result of normal office fires,” the specialists emphasized, noting that new evidence invalidates that hypothesis.

Request to reopen the investigation

Some time ago, more than 3,000 active and retired architects and engineers called on the US Congress to conduct a new investigation into the three WTC skyscrapers that were destroyed on Sept. 11.

Under the name ‘Architects and Engineers for 9/11 Truth,’ they said there was “sufficient doubt about the official story to justify reopening the 9/11 investigation.”

“The new investigation must include a full inquiry into the possible use of explosives that might have been the actual cause of the destruction of the World Trade Center Twin Towers and Building 7,” they said.

‘Possible use of explosives’

In 2009, independent research conducted by a team of international scientists discovered, after analyzing some dust samples from the debris in the area where the skyscrapers collapsed, that they all contained a red layer of active thermitic material, incorporating nanotechnology.

The study conducted by Niels H. Harrit, a chemist at the University of Copenhagen in Denmark, determined that it was a high energetic explosive material that would explain the remains of molten metal, and why the fires lasted under the rubble for months.

Professor David Ray Griffin, author of a reference work in which he details up to 115 omissions and distortions in his work, “The 9/11 Commission Report: Omissions and Distortions,” which aims to dismantle the official version of the attacks on the World Trade Center, as well as the Pentagon and the White House, which occurred on the same fateful day, collaborated in the investigation.

The following is a summary of some of the most important points that Griffin mentions in his book alleging a possible complicity of some elements of the government in the attack: