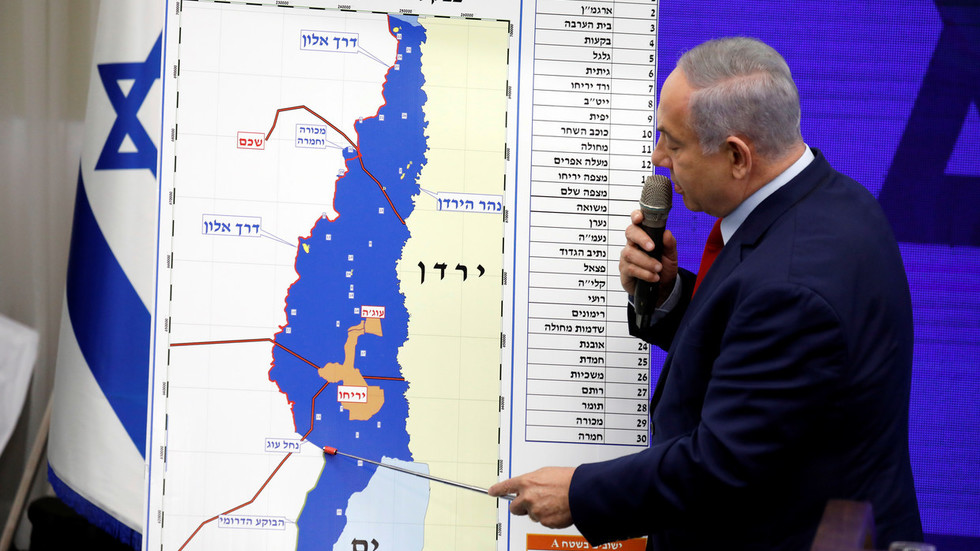 Israeli Prime Minister Benjamin Netanyahu has said that if reelected, he will annex the Jordan Valley, part of the occupied West Bank, and home to Israeli settlements.

Speaking at a press conference in Ramat Gan on Tuesday, the Israeli leader promised to “apply Israeli sovereignty” to the Jordan Valley, which he described as “our eastern border, our defense wall.”

The annexation of the Jordan Valley will be Netanyahu’s first step if elected next week, the Prime Minister said, with further land claims to come after the publication of US President Donald Trump’s long-awaited Israel-Palestine peace plan. Netanyahu called the plan a “historic opportunity” to negotiate the future of the region with Trump.

ALSO ON RT.COMIsraeli annexation of Jordan Valley would be the ‘death of the two state solution’ – George GallowayThough he did not address the matter directly, some observers took Netanyahu’s bold pronouncement as evidence that the annexation had been coordinated with Trump. However, the Israeli leader instead asked voters for the mandate to make Israel’s case to the US.

“Who will negotiate with Trump, who will conscript him on our side?” he asked, “me or Lapid and Gantz?” referring to opposition leaders Yair Lapid and Benny Gantz.

If I'm understanding this correctly, Netanyahu is not saying Trump supports his vague annexation position. He's saying he'll *convince* him after the election. In other words, he couldn't get Trump on board now. Maybe that's why this speech was delayed? Quite the letdown. https://t.co/Syjrw65lzI

When asked about Netanyahu’s comments, a White House official told Reuters there was “no change in United States policy at this time,” adding that Washington “will release [its] Vision for Peace after the Israeli election and work to determine the best path forward to bring long sought security, opportunity and stability to the region.”

Some commenters, however, saw Tuesday’s announcement as mere election bluster. The speech was “a clear play by Likud for right-wing votes,” wrote Israeli journalist Neri Zilber.

“It’s a meaningless policy/diversion tactic to wrest control of the agenda and take votes away from other right-wing parties,” Haaretz journalist Anshel Pfeffer commented. “He hasn’t got an annexation policy. Yet.”

Speaking shortly before Netanyahu’s announcement, Palestinian Authority Prime Minister Mohammad Shtayyeh called his Israeli counterpart the “chief destroyer of the peace process,” and warned that “any foolish move he makes will have negative consequences for him in the domestic and international arena.”

“He is trying to take the land without the people and saying ‘you are free to leave,’” she added.

Netanyahu’s cheap pandering to his extremist racist base exposes his real political agenda of superimposing “greater Israel” on all of historical Palestine & carrying out an ethnic cleansing agenda. All bets are off! Dangerous aggression. Perpetual conflict.

Though it lies within Palestinian territory, the area concerned is currently under full Israeli control, and has been since the signing of the Oslo Accords by the Palestinian Liberation Organization (PLO) and Israel in 1993 and 1995. The Jordan Valley makes up 60 percent of the West Bank’s territory, but is sparsely populated.

Though “annexation” is a headline-grabbing word, Netanyahu had already ruled out an Israeli withdrawal from the area earlier this summer. Speaking with US National Security Advisor John Bolton in June, Netanyahu stated that any future peace plan with the Palestinians must guarantee Israel a presence in the Jordan Valley, which he said “guarantees stability and security for the entire region.”

Before hanging on to power in April’s election, Netanyahu also said he would move to annex the West Bank if elected, claiming “a Palestinian state will endanger our existence.”