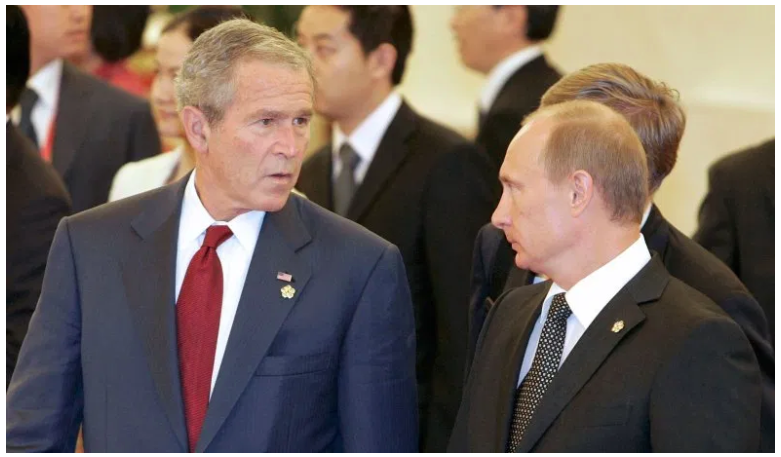 Smoke can be seen coming out from one of the World Trade Center towers and flames are coming out from the second tower when it explodes on Sept. 11, 2001. (Chao Soi Cheong/AP Photo, Archive).

The book, “The Russia Trap: How Our Shadow War with Russia Could Spiral into Nuclear Catastrophe” published this week, tells that Putin phoned Bush to warn that Russian intelligence had detected “signs of an incipient terrorist campaign coming out of Afghanistan,” said RT.

Allegedly, the Russian leader warned Bush that it was “something long in preparation.” This revelation appears to be further proof that the warning was not limited to exchange between intelligence agencies and that Washington was repeatedly warned about the attacks that ultimately claimed the lives of more than 3,000 people on Sept. 11, 2001.

It is worth mentioning that “in addition to Russia, the U.S. had been reportedly warned by British spies, and the danger of impending attacks had been repeatedly highlighted by both the CIA and the FBI,” added RT.

In fact, the warnings began even before Bush assumed the presidency, at least in December 1998, when the CIA gave President Bill Clinton the first report alerting him that Al-Qaeda was preparing to attack the United States titled: “Bin Laden Preparing to Hijack U.S. Aircraft and Other Attacks,” which was declassified in 2004.

The U.S. Intelligence Services received another warning in April 2001 from Ahmad Shah Massoud, leader of the Northern Anti-Taliban Alliance—who was killed by Al-Qaeda shortly before Sept. 11, 2001, and who sent a warning cable to the Pentagon and declared to the European Parliament that his agents had obtained “limited knowledge” about the imminence of a “large-scale terrorist attack” on U.S. soil, according to CNN.

Days later, on May 1, 2001, they presented their report. From then on, the CIA began to report with some assiduity to President Bush on a terrorist process that was underway formed by “a group present in the U.S.,” according to The New York Times.

On June 29, 2001, the agency made it clear that the U.S. was not the subject of a “disinformation campaign” on Al-Qaeda, but that the threat was real.

The report included “an interview that same month with a journalist from the Middle East in which Bin Laden’s assistants warned of an upcoming attack,” The New York Times reported.

In July 2001, Bush’s National Security Adviser Condoleezza Rice, again ignored warnings from J. Cofer Black, head of CIA counterterrorism, and George Tenet, director of the CIA, that al-Qaeda was likely to attack the U.S. imminently. Secretary of Defense Donald Rumsfeld, for his part, insisted that the whole thing was a disinformation campaign, The Washington Post reported.

On Aug. 6, 2001, he received his daily report titled, “Bin Laden Determined to Strike in U.S.,” which warned of the tragic event that took place a few weeks later, and which was also dismissed by the Bush administration.

A difficult mystery to solve

For now, despite all the investigations that have been conducted and the testimony of several members of the Cabinet of then-President George W. Bush, it remains a mystery whether the White House could have done more to prevent the attacks that rocked the American people and the world.

“The terrorists who attacked the United States sought not just to take the lives of U.S. citizens and crumble buildings. They hoped to break America’s spirit, and they failed,” said Vice President Mike Pence on Sept. 11, 2018, during a ceremony honoring the victims who perished in the tragic event 17 years ago. “The American people showed on that day and every day since, we will not be intimidated.”

For his part, President Donald Trump repeated on several occasions, without giving details, that he believes he knows who is really behind the attacks, which contravenes the official version:

“By the way, Iraq did not knock down the World Trade Center. It was not Iraq. It was other people. And I think I know who the other people were,” he said in an interview with ABC News, specifying that launching a U.S. military intervention in the Middle East on the pretext of the 9/11 terrorist attacks was “the worst decision made in the history of our country.”