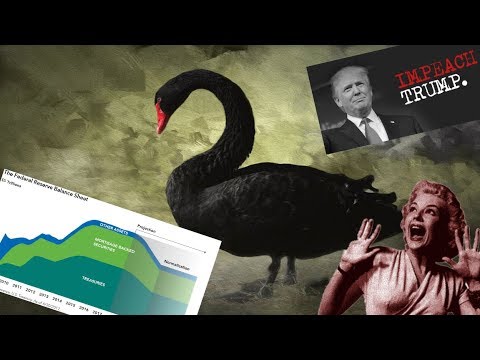 Many signs point to imminent, bigger than Lehman financial tsunami

Benjamin Fulford, Full Report:  Veteran financial market observers will tell you that anomalies in the financial markets last week point to some sort of black swan event on the horizon.  This could be (cross your fingers and knock on wood) the signs of the long-awaited implosion of the U.S. Corporate government.  It could also be the signal for a new Bretton Woods-style reboot of the world’s financial system.

The Repo market is basically a market where banks etc. use long-term high-quality financial instruments like U.S. government bonds as collateral to borrow here/now cash.  The jump from 2% to 10% in the Repo market in a single day either means insiders think U.S. bonds are about to become worthless, or else some huge bank is about to go bust and so nobody wants to hand any cash over to them.​

The privately owned Federal Reserve has been trying to calm things down by offering to dish out $75 BILLION per day between now and October 10th.  That’s interesting timing, because the U.S. Corporate government has a payment deadline on September 30th and could be given until around October 10th (or the 17th at the latest) to come up with the money if it failed to pay up on September 30th.​

A British Royal family member explained, “The financial industry has been bankrupted by a (very wise) decision by the U.S. judiciary to allow class action suits against the financial industry.  The volatility (in the repo market) is just an aftershock of that,” he explains.​

Many banks, including J.P. Morgan, Deutsche Bank, Barclays, Bank of New York Mellon, Societe Generale, Commerzbank, and others are now being treated as organized crime gangs and being hit with RICO and other anti-gang laws. Needless to say, these criminal cases will lead to bank-busting lawsuits by the victims of these financial misdeeds.​

These legal moves are not the only sign the financial system is collapsing.  A look at U.S. loan markets reveals that a complete disaster has already begun.  There are now $3,128 TRILLION worth of high-risk loans or bonds to either sub-prime real estate or iffy corporations. And this does not include the over $200 trillion dollars (10 times GDP) in unfunded liabilities the U.S. government has.​

One more shocker:  The U.S. government-owned housing finance companies Fannie Mae and Freddie Mac have a total of $6 billion ($3 billion each) as a capital buffer, but they own or guarantee almost $5 trillion in mortgage securities.  That means they are leveraged over 1,000 to one.  In other words, if housing prices fall even 0.01%, they are bust.  And guess what, folks…  there are signs housing prices have in fact started falling.​

No wonder finance guru Jim Rogers predicts the entire financial system will collapse within 2 or 3 years.  He is probably an optimist.​

It may well be that the wildly overvalued, if not outright fraudulent “real estate” company WeWork may be the immediate trigger for the collapse.​

Japanese sources tell us that multiple threats (earthquakes, nuclear bombs, etc.) are being made against Japan in order to force them to fork over more money to the U.S. Corporation.​

Then we have the Rockefeller-controlled World Bank and World Health Organization indirectly threatening to kill 80 million people (Marty note: I wasn’t able to pull up any details on this)

Pentagon sources tell us, “The death of longtime Zimbabwe leader Robert Mugabe, sanctions on Iran’s central bank, Saudi oil disruption, and the China trade war may speed up the timetable for President Trump to announce a return to the gold standard.”​

The U.S. military, meanwhile, is strengthening its hand in the Middle East in preparation for coming world changes.  Our Pentagon source reports, “Former Israeli Defense Chief, Benny Gantz, may well be the next Prime Minister of Israel. This means, “Pentagon influence now officially extends from Saudi Arabia and Egypt to Israel.”​

This will be good for Middle East peace, the source explains, because “Gantz needs the support of Joint List Arab parties, and a paper tiger, Israel-Defense-Forces, is afraid of casualties against superior Russian and Iranian weapons, so this should deter any future aggression.”​

“With Benjamin Netanyahu FINALLY deposed, anti-Sisi protests in Egypt, and U.S. troops to Saudi Arabia to ‘protect’ Salman (ruler over Saudi Arabia), Trump is reining in his three dictators to accept a new Mideast under Russia, China, Iran, and Turkey,” the source further notes.​

The other thing the Pentagon source reported this week was that “The three military-industrial complex corporations were against the ropes with Lockheed F-35 dysfunctions, Boeing 737, 777, 787 troubles, and Raytheon Patriot missile defense crap.”  This is bad news for the Zionists and the Deep State, but good for peace in a multipolar world,” he says.​

We also got a very interesting, if bizarre report this week from a U.S.-based CIA source that I decided to include verbatim below because I have independently heard a lot of similar stuff from multiple high-level insiders:​

“This comes from a source at the MJ (Majestic or Military Justice?) level and I consider it completely accurate.  For Killery to be prosecuted, the whole CIA would have to be dethroned and the whole fake national security system (which was set up to provide cover for crimes used for raising black operations money, cover for many covert operations and sanctions, as well as personal enrichment of the top controllers) would have to be declared criminal and then be restricted by about 95%.​

“The Clintons were CIA, their case officer was George Herbert Walker Bush; Killery was conceived in an ‘eyes wide shut’ occult breeding ceremony, supposedly by a top Rothschild, and Bill, the illegitimate son of Nelson Rockefeller, was conceived the same way;  thus their great power.​

“The CIA filed national security waivers to the U.S. Department of Justice (Just Us) so that all evidence against Killery and Bill and the Clinton Foundation was protected under national security and could not be used to prosecute anyone.  Killery’s e-mails were a covert operation against the Chinese, giving up e-mails and agents’ names (willing to get rid of them) in order to gain trust and to seed some incorrect misinformation to mislead the Chinese.  Killery was playing a double agent role to deceive the Chinese while helping to build them up, to later be parasitized by City of London private banksters.​

“Right now there is an internecine war (a war to the death) among different groups at the top. ​

“Killery represents the satanic/pedophile network, and is a satanic Moloch witch of a coven in California where she usually attends monthly occult ceremonies.  The Pizzagate stories are all true, and are connected to Epstein, NXIVM, and many more human-compromised child sex trafficking, and the child sacrifice occult system worldwide.​

“The Bush/Scherf cabal is part of the Nazi Fourth Reich (worshipers of the Black Sun and run by the COL Zios, related to the various occult circles from the days of John Dee and Aleister Crowley, which merged British Intel with entities from the dark side).​

“The reason child sex trafficking and sacrifice is so important is that these criminals believe they must use this to compromise and control all major officials and corporate heads while feeding the negative life force energy needs of Baal/Moloch, in order to be suitably empowered to run the world and stay very wealthy.  Some are addicted to the victims’ blood and hormones.​

“I believe that soon this whole Zionist/Cabal bunch will be pushed aside by the Chabad using the Sanhedrin rabbis, and they will institute the Noahide Laws (they are already supposedly “law” in the USA;  Ronald Reagan supposedly spearheaded it, perhaps by a Presidential Decision Directive.  All visible existing economic and power structures, especially “Mystery Babylon”, which is the Vatican/COL/DC system based on the U.S. petrodollar, will be pushed out of power.​

“Here is what the top Circle of Nine controllers (some say they aren’t human, or are “hybrids”) have as their agenda right now:  Manipulate Russia and America to destroy each other while the Zionists in Israel and Islamics in the Mideast destroy each other, and then China will become the world’s premier power and will take over the Mideast after they complete the Belt and Road system, which will be the biggest economic development since WW2 in America.”​

Meanwhile, a CIA source in East Asia sent the following: “I was told last night by one of my very good contacts that a major false flag Event has been planned for some time now.  And yes, Australia is involved, as the Event is scheduled to take place near Australia.  Prime Minister Scott Morrison went to see Trump for much more than a nice State Dinner.  He is there until 27 September.  Could this be when the Event occurs… while the Prime Minister is out of Australia?  Australia was the first ‘test bed,’ so to speak, for New-World-Order laws and various social engineering projects.”​

This is raw intel, folks, so take it with a grain of salt, but the sources are real and there can be no doubt something big is coming our way.​

The U.S. military needs to arrest the 120,000 people named in sealed indictments ASAP and take them to the FEMA camps that the U.S. corporate government built for us. ​