The Apollo 1 Conspiracy; Did NASA Cover Up Gus Grissom’s Death?

Most people are familiar with the names of the famous NASA astronauts who pioneered the early space program that led to the first lunar landing in 1969. Names like Buzz Aldrin, Neil Armstrong, John Glenn and Alan Shepard are familiar in the pantheon of space pioneers, though there is one name that is less recognized, but equally important; Gus Grissom. While he played an integral role in getting the space program on its feet, his legacy will be forever marred by the Apollo 1 conspiracy as well as other controversies in his career, but is any of it true?

What Happened To Gus Grissom?

Virgil Ivan “Gus” Grissom was the second man in U.S. history to fly in space, preceded only by Alan Shepard and cosmonaut Yuri Gagarin. On July 21st, 1961, Grissom reached a suborbital altitude of about 118 miles above the Earth’s surface in a 15 minute flight, before making his descent in the Mercury capsule, which he dubbed the Liberty Bell 7.

Thus, started the controversy in Grissom’s career, as he narrowly escaped death from what initially appeared to be a botched landing from his failure to execute protocol, but what actually turned out to be a faulty mechanism in the capsule’s hatch release.

Grissom landed in the Atlantic in choppy waters, whereupon his hatch door blew open prematurely. Grissom immediately jumped out without making the necessary adjustments to prevent water from seeping into his already 22 lb. spacesuit. Meanwhile, the capsule itself, which was supposed to be recovered, started taking on water, making it way too heavy to be hoisted out of the ocean by helicopter. Eventually the helicopter pilot gave up, realizing he wouldn’t be able to tow the capsule to shore, and noticing that Grissom was minutes from drowning. 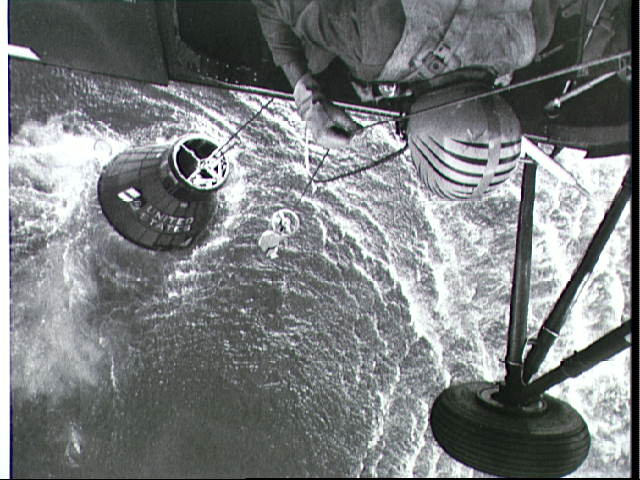 Though he was saved, Grissom came under heavy criticism for not following procedure, leading many to believe that he panicked and released the hatch too soon. Grissom denied these claims, stating that the hatch released randomly and that he never touched the activation plunger.

The capsule sunk to the bottom of the ocean and wasn’t recovered for another 38 years. Grissom received a significant amount of flak from the public and from the aerospace community for losing the capsule. Though it was later proven that the hatch released to no fault of his own. In 1966, he and his family were moved to a safe house and kept under watch by the Secret Service.

Grissom along with two other astronauts, Roger Chafee and Edward White, were slated to launch the inaugural mission of the Apollo program in February of 1967. About a month prior to the designated launch, the crew gathered at Cape Kennedy Air Force Station for a “plugs-out” test, which was essentially a mock launch.

Within the first few hours, it became clear that there were numerous issues with the module. The crew reported a foul smell coming from their breathing oxygen system as well as issues with their communication system. Grissom was notably aggravated with the technical difficulties and was recorded as saying, “How are we going to get to the moon if we can’t talk between two or three buildings?” and calling the module a “bucket full of screws.”

But Grissom had also shown frustrations with the program leading up to that day, having purportedly told his wife, Betty, that if there were ever a serious accident in the space program it would likely involve him. He was also said to have grabbed a lemon from a tree on his property before heading to base and tying it to the hatch of the simulator. When he was asked by the media what he thought the chances were of the Apollo missions succeeding, he replied that he thought they were slim. 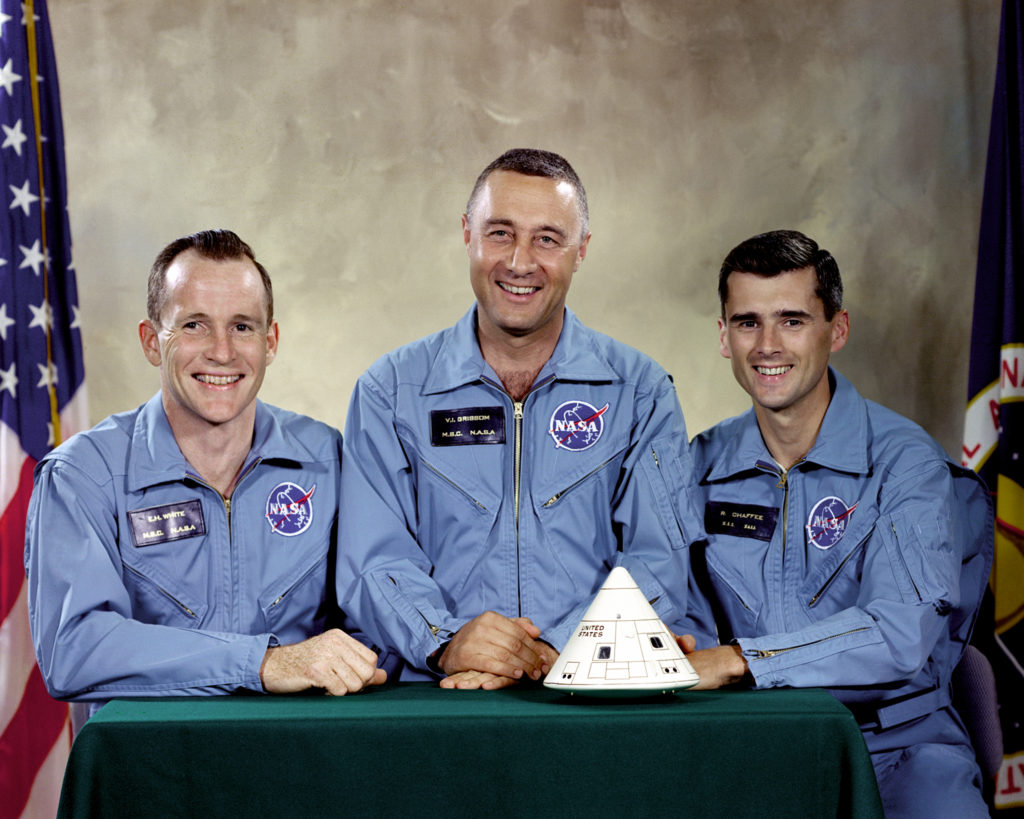 Within a few hours of the simulation, a spark from under Grissom’s seat ignited a fire that quickly engulfed the entire capsule. The pure oxygen and highly pressurized cabin quickly fueled the fire and prevented the astronauts from being able to open the hatch, trapping them inside. They all perished before NASA employees were able to open the hatch and free them.

NASA claimed that the fire burned toxic chemicals, causing the astronauts to die from asphyxiation within a minute, though a claim from someone within the private contractor North American Aviation said that the crew struggled to open the hatch for a full five minutes. NAA had been the primary contractor in building the module and was put under intense scrutiny when a congressional investigation exposed documented evidence of failings and inadequacies in the company’s development process.

There was one safety inspector who brought to light the technical issues surrounding the Apollo 1 mission, whose story is particularly conspicuous in the possibility of a larger cover-up. Thomas Ronald Baron was a quality control and safety inspector for NAA who has been highly critical of NASA and its protocol during the Apollo project. Baron put out a 55-page report detailing the shortcomings and disarray that the program was in.

Baron’s report was brushed off as being overly critical and blown out of proportion, with few of his claims having any real credibility. At one point, he testified before Congress claiming that, under current circumstances at NASA, we would never make it to the moon. Though, many did not pay attention to Baron and believed that he was potentially being used as a pawn in Sen. Walter Mondale’s campaign to expose and dismantle NASA for its wasteful spending. Baron was fired by NAA for leaking his report to the press, while his company denied the majority of his criticisms. It later came out that top-level officials verified the credibility of at least half of his claims. 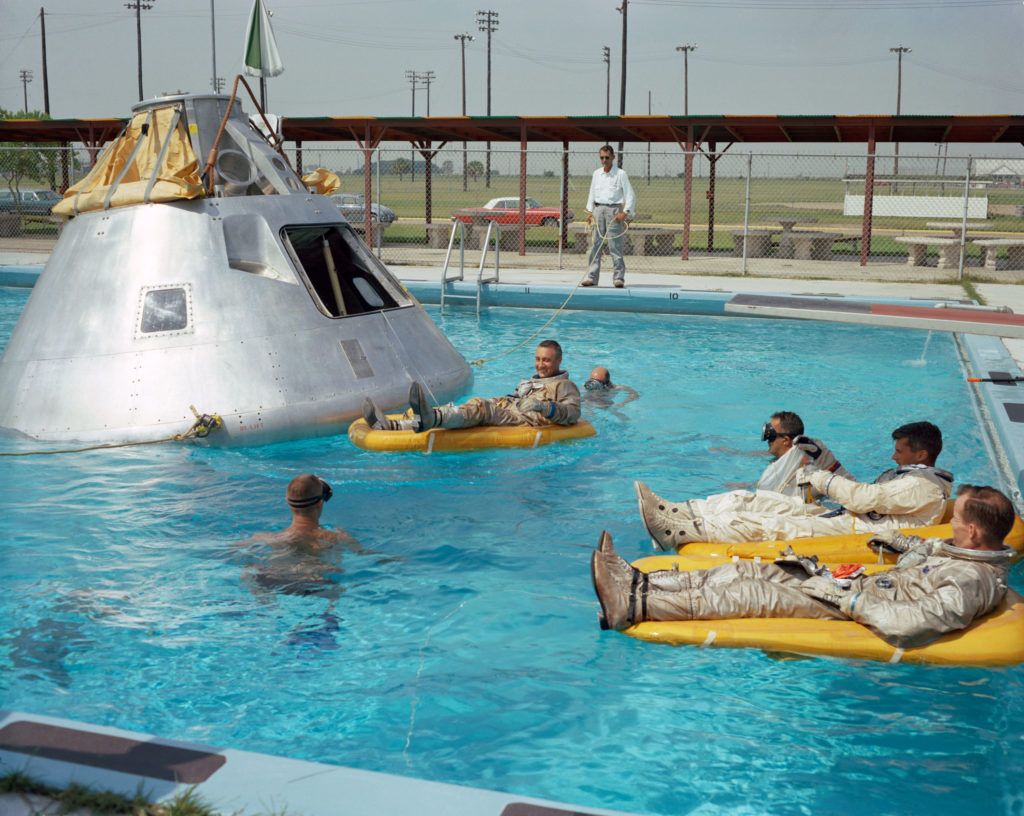 The Apollo 1 Crew Training via nasa.gov

A few weeks later, the Apollo disaster occurred and Baron began work on turning his 55-page report into a 500-page report excoriating NASA and NAA for the failures that led to the tragedy. Oddly enough, within a week Baron and his family were killed when their car was struck by a train. The cause of death was ruled accidental and no autopsy was performed.

The official verdict was that Baron likely tried to race a train to beat it before it crossed the tracks with his wife and step-daughter in the car. If this sounds absurd, that’s because it is. A whistleblower who testified before Congress against NASA and a large private aerospace contractor just happened to die because he didn’t have the patience to wait for a train to cross? Unsurprisingly, the official ruling said that he was mentally unstable and that there was even the possibility that he was attempting suicide; a common cover up tactic and attempt to explain what would otherwise look like a blatant murder. Baron’s 500-page report was destroyed and never published.

In 1999 the charred remains of the test module that trapped Grissom and his two colleagues was opened up for his family to see. Scott noticed a fabricated metal plate behind a switch on one of the instrumentation panels. He believed that the switch was used to deliberately create a spark that would have ignited the cabin, killing Grissom and the other astronauts.

This story was supposedly backed by an aerospace contractor who worked for McDonnell-Douglas, a company that later merged with Boeing. Scott Grissom believed that NASA didn’t want his father to be the first man on the moon after his botched Liberty Bell 7 landing. He said he believed that NASA might not have trusted him and was likely upset with Grissom’s outspoken frustration with the technical difficulties in the Apollo program.

But Scott Grissom said that he’s not exactly sure why NASA or the government would want to prevent his father from continuing in the program, to the extent that they would sabotage him, but he believes it was intentional. And Gus Grissom’s wife, Betty, also agrees with her son, saying that she too believes her husband was murdered. In the end, Grissom’s eerie, prophetic statement to his wife was right, the first serious accident in the space program did involve him.