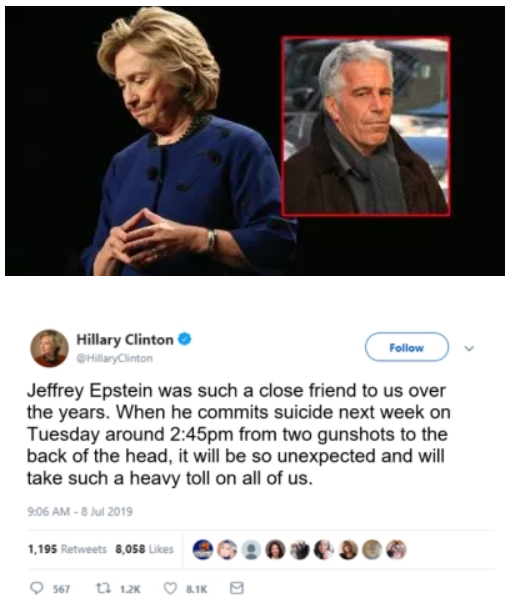 Jeffrey Epstein did NOT kill himself.

“I was incarcerated as an inmate awaiting trial in a county jail in New York very similar to Jeff Epstein’s situation. For reasons that are too long to explain here, the jail had me under suicide watch because my case was so HUGE at the time. They had me under such close observation that I could not even pee in my cell toilet without the whole jail staff watching my every move. Not only that, but they stripped me of every single possible means of killing myself. They wouldn’t even let me have a short strand of dental floss after eating. Belts were out of the question as was plastic silverware. Look it, I was certainly not a “Jeffrey Epstein” and yet the jail guards and nurses and other administrators were hovering all over me likes flies on a cow-patty. Every single moment on suicide watch was like living the nightmare of the Truman show.  Given the multiple wide-angle cameras in those specially equipped observation cells, I was on TV—24/7!  Oh, and by the way, once you’re put on suicide watch for cause, you’re always on suicide watch in jail. What’s the point? Epstein didn’t commit suicide. Either he was murdered by the prison staff like the medical personnel, allowed to be killed by a stealthy CIA assassination setup or he’s been whisked away to Israel where he will continue his Pedogate psyop under the dark cover of Mossad. Case flippin’ closed ! ! !

— Submitted to SOTN by a former New York jail inmate

Now here’s a FOX News report that contains more firsthand testimony from another jail inmate who has intimate experience with the correctional facility where Epstein was imprisoned. There’s ‘no way’ Jeffrey Epstein killed himself, a former NYC jail inmate says What really did happen to Jeffrey is well explained at this highly radioactive SOTN exposé posted on July 26, 2019.

For those who did read the preceding link, it reveals several critical angles on why the power elite had to dispose of Jeffrey Epstein … or at least give the impression that he was knocked off. Clearly, they only got rid of him for the sake of public consumption, except that they really did not bump him off.

As the subtitle of the previous link presciently stated:

Let’s face it, when the central cog in the Pedogate machine is facing the “Trial of the Millennium”, there’s no way in Creation that his many co-conspirators will permit him to let out so much as a peep.

Just how radioactive is EPSTEINgate?

Let’s put it this way: Jeff Epstein was the frontman for the primary control mechanism that’s used by the New World Order globalist cabal to keep this “Prison Planet” completely locked down. For the uninitiated for a comprehensive breakdown of Pedogate, please consult the following extended exposé.

Of course, the 64 thousand dollar question where it concerns Epstein is: Why did the power elite ever consent to his arrest in the first place. Compromising such a covert, complex multi-decade black operation simply doesn’t happen—EVER!

The answer to this critical question is both long and complicated and addressed in the following important analysis:

As for just how radioactive EPSTEINgate really is?  So radioactive that two POTUSes are involved: Clinton, Trump Emerge in Unsealed Epstein Evidence.

The back story to EPSTEINgate is truly the most sensitive and ultra-classified material on the planet today—bust open this international crime syndicate and the whole Pedogate house of cards comes crashing down. As follows: Mega Group, Maxwells and Mossad: The Spy Story at the Heart of the Jeffrey Epstein Scandal.

KEY POINT: There’s a lot of anecdotal evidence that indicates that Jeffrey Epstein was an exceptionally valuable Mossad asset/agent who was considered by many to be a unique type of genius. Alan Dershowitz has publicly stated that Epstein is the only person outside of his close family circle who he would give his manuscripts to for vital feedback before his books were published. What’s the point? The global intelligence community would never eliminate such a prized intel operative such as Epstein. For this reason alone he’s certainly alive and kicking somewhere in the apartheid state of Israel.

First, they had to eliminate with finality the prospect of a trial with all the revelatory discovery that takes place with such a legal spectacle—a extremely humiliating exercise for Epstein’s high-profile Pedogate cohorts. Epstein’s “Little Black Book” alone demonstrates the absolute necessity of dispensing with that most damaging piece of hard evidence in modern history. See PEDOGATE: These are just some of the VIP names in Jeffrey Epstein’s “Little Black Book”

Secondly, the perps at the top of the Pedogate food chain had to do something that would ostensibly put to rest the whole Jeffrey Epstein scandal/conspiracy. With his feigned death, the MSM can now put some closure on EPSTEINgate as though it’s all about him and no one else. With his very untimely ‘death’, the masters of the Pedogate universe will summon all their powers to put the kibosh on the exposure of their global child exploitation syndicate used for child sexual abuse, child slavery, child pornography, child snuff films, child satanic ritual abuse, as well as the organ, tissue, fluid and adrenochrome harvesting from innocent children.*

*See how vitally important it was to quickly neutralize Epstein, even though it was implausible to do so within via suicide the heavily monitored jail environment?

There’s also a third, fourth and fifth reason for the expeditious suiciding and/or Arkanciding of Epstein. These will be taken up in a follow-up article once law enforcement authorities and the corporate media totally expose themselves for the treasonous globalist shills that they are. We’re still waiting for the official account of how his suicide actually took place. Really, exactly how did he do it under such intense supervision?

Incidentally, this recent revelations about Epstein’s reading habits was enough to compel his handlers to remove him from the public spotlight like YESTERDAY.

KEY POINT: What distinguishes Pedogate from every other serious scandal and/or real conspiracy in America today is that this worldwide ongoing pedo-operation really hits home across America. Every parent in the nation runs the risk of having their precious child kidnapped right off the street — either by stealth or by force — and then forced into some type of the Pedogate predicament. Now read the Editor’s note below about how we can stop this, once and for all.

The following article contains a number of hysterical tweets about the utterly absurd report about Epstein’s so-called suicide. Really, how stupid do they think we are?! In point of fact, the elites think we are exceedingly STUPID! Now, let’s prove them wrong. But first, be sure to light your torch and pick up your pitchfork because that’s the only way these criminally insane psychopaths are going down. Patriots, and especially parents, please disseminate this pivotal post far and wide—thank you! When a critical mass of US have had enough of this unacceptable outrage in our very midst, we will terminate Pedogate once and for all.

Is Jeffrey Epstein really dead from an apparent suicide—tweets tell the real story?