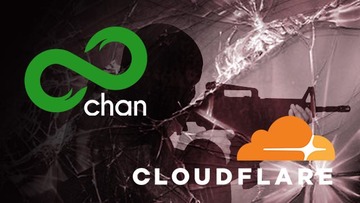 US company will stop supporting 8chan after El Paso shooting

BY EMILY BIRNBAUM
The Hill

The head of Cloudflare — the U.S. company that helps keep 8chan online — on Sunday said his company will stop hosting the fringe online platform known for supporting white supremacists.

If investigators conclude the manifesto did come from the gunman, it will be the third incident this year in which a suspect is believed to have posted a hateful, white extremist screed to 8chan — the anonymous message board which dubs itself the “darkest reaches of the Internet” — before committing a mass shooting.

Prince laid out his plans to pull his company’s service from 8chan in a blog post on Sunday night. He said they would cut ties by midnight on the West Coast.

As of Sunday at 10 p.m. EDT, the website was still up, but posters were anticipating the imminent end.

Cloudflare, a web infrastructure company, provides security and other services to websites to help keep them online. But the company has come under intensive heat from extremism experts over the past several months for continuing to host 8chan, even as it has become a hotbed for white nationalist, sexist, anti-Semitic, homophobic and otherwise hateful rhetoric.

Prince in his post predicted that another service would take up the mantle and 8chan would be back online soon.

“While removing 8chan from our network takes heat off of us, it does nothing to address why hateful sites fester online,” he wrote. “In taking this action we’ve solved our own problem, but we haven’t solved the Internet’s.”

Two years ago, Cloudflare decided to terminate service for The Daily Stormer, a neo-Nazi publication that is still running today thanks to a different infrastructure provider.

“Almost exactly two years ago we made the determination to kick another disgusting site off Cloudflare’s network: the Daily Stormer,” Prince wrote. “That caused a brief interruption in the site’s operations but they quickly came back online using a Cloudflare competitor.”

8chan’s Twitter account, shortly after Cloudflare’s decision, vowed to find a solution within the next few days.
“There might be some downtime in the next 24-48 hours while we find a solution (that includes our email so timely compliance with law enforcement requests may be affected),” 8chan tweeted.

Cloudflare’s decision to cut 8chan’s service is a surprising reversal from Prince, who spent the day telling reporters he believed it was necessary to keep 8chan online in order to aid law enforcement in their investigations of domestic terrorism.

Cloudflare has tended to insist it is a neutral service provider and does not make decisions about speech.

But Prince noted 8chan has proven itself “to be lawless and that lawlessness has caused multiple tragic deaths.”

“Even if 8chan may not have violated the letter of the law in refusing to moderate their hate-filled community, they have created an environment that revels in violating its spirit,” he wrote.

8chan, an anonymous messaging board, was created in 2013 and gained a dedicated following the next year as users began migrating from 4chan. While both boards branded themselves as spaces free from censorship, 8chan had even less moderation than 4chan, paving the way for the virulent hate that would come to populate the site.

Two other mass shootings have been liked to 8chan this year alone. In April, a gunman killed and wounded worshippers in a California synagogue after posting on 8chan’s /pol/ board, which is known largely as a gathering place for neo-Nazis. And in March, a shooter livestreamed the massacre of 50 people in two New Zealand mosques to Facebook after posting an anti-immigrant manifesto to 8chan.

The Anti-Defamation League in April in written testimony to Congress said fringe websites like 8chan and 4chan “serve as round-the-clock white supremacist rallies.”

Congress has hauled in the country’s top tech companies for hearings on online extremism and hate speech multiple times this year, but they have not found a way to bring in the owners of fringe platforms like 8chan. The current owner of the platform, a U.S. veteran, currently lives in the Philippines.

Companies like Facebook, Twitter and Google’s YouTube have pledged that they are doing more to coordinate their efforts to take action against organized hate groups. Experts have continued to insist they should do more to ensure extremists are not drawn from those online spaces to the more extreme platforms.

Rep. Mike Rogers (Ala.), the top Republican on the House Homeland Security Committee, in a statement on Sunday denounced the fringe platforms for “propelling young people toward violence.”

“The Homeland Security Committee has been closely tracking the accelerating pace of online radicalization,” he said. “I have made clear that hateful ideologies amplified by 8chan and other fringe websites are propelling young people toward violence before law enforcement is able to act. Yesterday’s events were yet again enabled by the echo chambers these fringe websites have created.”

“Even if a social media company was able to report to us ‘this terrorist has put a manifesto’ or ‘this person has put up a thing criticizing various ethnic groups,’ that’s not something we can investigate … solely on the basis of that information,” Brad Wiegmann, a Justice Department official, told lawmakers at the May hearing.

The debate over what to do about those websites has raged for years, as some argue kicking those users off one platform will just push them further into dark corners of the internet while others say it is productive to cut off the issue at the root.

“Unfortunately the action we take today won’t fix hate online,” Prince wrote in the blog post on Sunday. “It will almost certainly not even remove 8chan from the Internet. But it is the right thing to do. Hate online is a real issue.”