Why is Christian Zionism fundamentally anti-Semitic? 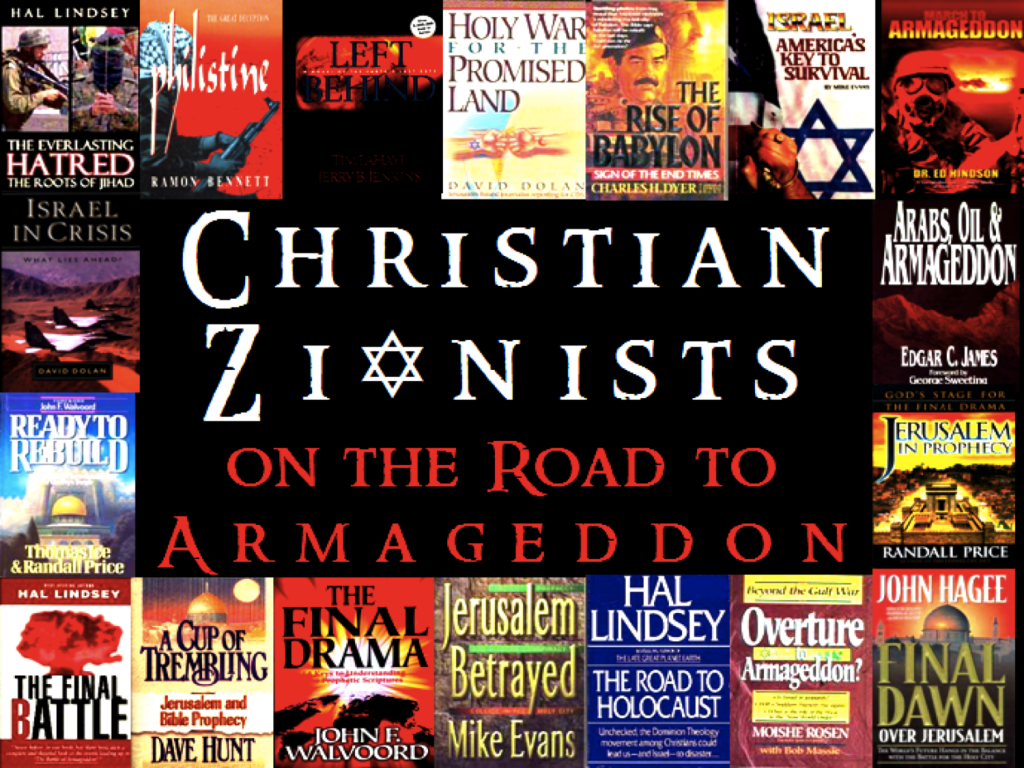 Why is Christian Zionism fundamentally anti-Semitic?

At Its Core, Christian Zionism Is Anti-Semitic

Three days ago (July 8), Jewish Rabbi Lynn Gottlieb and Plymouth Congregational United Church of Christ pastor Rev. Graylan Hagler collaborated on a column that was published on the Religion News Service website entitled The anti-Semitic theology behind the Christian Zionist lobby. Although I take exception to some of what is stated in the column, it is a very good read.

This week, the largest Israel lobby group in the United States, Christians United for Israel, will hold a two-day “summit” in Washington, D.C., featuring high-profile speakers such as Vice President Mike Pence and Secretary of State Mike Pompeo. Many of the event’s attendees and featured guests will profess their abiding love and support for Israel and Jewish people.

In reality, right-wing Christian supporters of Israel like CUFI pose a grave danger to the safety and well-being of both Jews and Palestinians, as well as to hopes for a true and lasting peace in the Holy Land. Anyone who actually listens to CUFI’s leader, the Rev. John Hagee, will be horrified at the meeting’s toxic blend of anti-Semitism, racism, homophobia, Islamophobia and sexism.

Hagee and his more than 5 million followers believe that the establishment of Israel in 1948 and its subsequent military occupation and colonization of Palestinian and other Arab lands are the fulfillment of biblical prophecy and the necessary precursors to the return of Jesus Christ and the coming of the apocalypse.

It is very difficult for people who have not grown up in or who do not attend churches who teach prophecy doctrines that promote Israel-based dispensational futurism to truly understand the hold—even bewitchment (to use the Apostle Paul’s word in Galatians 3:1)—that the Rothschild-created State of Israel holds over these churches. But faithful readers of this column and those who regularly watch my online messages know that I was professionally educated (in two different Christian colleges) in the doctrines of dispensational futurism and went on to teach those same doctrines for over 30 years; so I am well-versed in this teaching.

For people who are out of the loop on this subject, most Baptist churches, charismatic churches, “Bible” churches and those that are identified as conservative evangelical churches promote the false doctrines of Israel-based dispensational futurism. The same is true for many Christian colleges and universities, such as Liberty University, Dallas Theological Seminary, etc. The vast majority of television evangelists and radio preachers in America also promote this false doctrinal system.

So, I cannot express how pleased I am to hear a Jewish Rabbi say that instead of supporting the Jewish people, as he professes to do, John Hagee (and his fellow Christian Zionists) is actually practicing anti-Semitism. The rabbi is exactly right.

Thanks mostly to the influence of the Zionist-concocted Scofield Reference Bible, Christian Zionism is predicated upon the false presupposition that God is not finished with the Old Testament nation of Israel and that the Zionist State of Israel created in 1948 is a prophetic fulfillment of a resurrected “end times” nation of Israel.

According to Christian Zionists, before Christ returns, the nation of Israel must be resurrected (they believe the modern State of Israel fulfills this prophecy), that a third Jewish temple must be built (they believe Donald Trump is instrumental in helping to fulfill this prophecy as we speak), that the third temple will bring the Antichrist to power and that he will proclaim himself to be the real Christ in that temple, that he will deceive the modern State of Israel and most of the world into believing that he is Christ and that he will then unleash a worldwide holocaust against, yes, the Jews and all mankind, resulting in the death of most of the world’s population. After this, they believe, Christ will come and defeat the Antichrist at Armageddon. Oh, I left out one important part: Christian Zionists believe that sometime before Antichrist begins his worldwide conquest, they will all be raptured to heaven.

Now, stop and think this through (which Rabbi Gottlieb obviously did). John Hagee and his gaggle of Christian Zionists claim to be rabidly “pro-Israel.” Anything Israel wants, these Christian Zionists are in favor of it. They support Israel’s persecutions and acts of genocide against the Palestinian people—many of whom are Christians. They support Israel’s wars of aggression against any and all of its Arab neighbors. They support Israel’s murders, thefts, plundering, rape, torture, spying, acts of terrorism, ad infinitum, ad nauseam. They even supported (and still support) Israel’s unprovoked attack against the USS LIBERTY in 1967 that killed 34 U.S. Sailors and Marines and wounded 174, making up all kinds of outlandish excuses to justify Israel’s unconscionable attack against the American people on that day. Of course, they base all of this hate, death and destruction on God’s promise to Abraham in Genesis 12:3 (“I will bless them that bless thee….”) and erroneously apply it to the counterfeit State of Israel created in 1948.

But applying Genesis 12:3 to the modern Zionist State of Israel is actually much more draconian than a simple misinterpretation; it is a blatant and blasphemous attack against the completed work of Christ on the Cross. Galatians 3:16 is crystal clear that God’s promise to Abraham was completely fulfilled in Jesus Christ. To apply this promise to modern Israel is a dastardly denial of God’s Word and Christ’s finished work on the Cross.

And here is what Rabbi Gottlieb understands: According to Christian Zionist theology, the end result of all of this “support” for Israel is what? The rise of Antichrist and a global holocaust against THE JEWS (I’m using the term “Jews” as understood by Christian Zionists). Hagee even openly says that Christian Zionists are NOT trying to convert the Jewish people to Christ. That part is true. Hagee and his ilk are brazen in their position that trying to evangelize Jews is a “waste of time.” But then the charismatic John Hagee lies and says his support for Israel is NOT about “end times” prophecies. But it’s ALL about “end times” prophecies, and Rabbi Gottlieb knows it.

If Christian Zionists truly love the Jewish people so much, and if they truly believe that a resurrected Israel and the building of a third Jewish temple will result in the advent of the Antichrist, who will inflict a holocaust upon the Jewish people—one so terrible and enormous that it will make any persecution that the Jewish people have endured before look like a Sunday School picnic—why would they not do everything in their power to RESIST this satanic conspiracy? Christians are commanded in Holy Scripture to “resist the devil” (James 4:7; I Peter 5:8, 9), not assist him.

Does not the Scripture say that Christians are to “have no fellowship with the unfruitful works of darkness, but rather reprove them”? (Ephesians 5:11) Tell me, what could possibly be a darker work than deliberately, willingly and happily helping to pave the way for the Antichrist to come and kill billions of people—including most of the Jews in the world?

The hypocrisy of Christian Zionists to decry the persecution of Jews in World War II Germany and then turn around and willingly work to bring about a future holocaust—the likes of which the world has never seen—is so audacious that it’s hard to comprehend. Oh, that’s right. They won’t be here to see or experience all of this death and destruction that they so enthusiastically helped bring upon the rest of the world.

Rabbi Gottlieb is absolutely right: By their works, John Hagee and his fellow Christian Zionists are proving themselves to be quintessential anti-Semites.

The truth is, unlike most of our evangelical Christian pastors, there are thousands of Jewish rabbis who understand that Zionism has nothing to do with the Jewish faith system (which today is NOT Old Testament Judaism, but a mix of Talmudism, Kabbalism and mysticism) and everything to do with an atheistic, militaristic political system that cares nothing for the Jewish people—or any other people, for that matter—and whose only purpose is to advance the wealth and power of the Zionist elite through perpetual war and perpetual debt to the Zionist-controlled international banking cartel.

If you doubt the reality of the resentment and opposition to the Zionist State of Israel among many Orthodox Jews and rabbis, I challenge you to watch this video.

Instead of bringing God’s blessing upon America for “blessing” Zionist Israel, Hagee and the rest of these Christian Zionist preachers are bringing God’s curse on America.

In my Israel Package containing 15 messages on the Biblical truth about Israel, I bring a message entitled I Will Curse Them That Bless Thee, showing from Scripture that America’s partnership with and promotion of atheistic Zionist Israel has brought about much of our country’s moral deterioration, family disintegration, social collapse, educational crisis, political morass, etc.

Instead of trying to hasten the rise of the Antichrist, with the resultant death and destruction of millions of Jews (and how many people of all races and nationalities in the meantime), Christians should be preaching the glorious “gospel of peace” (Romans 10:15; Ephesians 6:15) to ALL men, including Jews, Muslims, Palestinians, etc., which will bring life, liberty, peace and goodwill to ALL men equally.

Here is the crux of the matter: Real Bible believers understand that “Christ is the end of the [Jewish] law for righteousness.” (Romans 10:4) They know that “there is neither Jew nor Greek” but that we are “all one in Christ Jesus.” (Galatians 3:28) They know that “he is not a Jew, which is one outwardly [in the flesh].” But “he is a Jew, which is one inwardly [in the Spirit].” (Romans 2:28, 29) And they also know that the true “Israel of God” (Galatians 6:16) is not that strip of real estate in Palestine but is the entire Body of Christ comprised of all believers in Christ, regardless of their nationality, ethnicity or race (Ephesians 2:11 – 22).

The doctrines of Christian Zionism have spawned much evil. The promoters of this devilish dogma are partnering with the “works of darkness.” Christian Zionism is not only anti-Semitic (as Rabbi Gottlieb opines); it is anti-America, anti-freedom, anti-constitutional government, anti-peace, anti-Natural Law and, in the end, anti-Biblical truth.

P.S. After more than 30 years teaching and preaching the doctrines of Israel-based dispensational futurism, God opened my eyes to the truth, and I now see the great error of this false theology. I have spent the past decade studying the truth of the Scriptures relative to this subject—and I am still studying. I’ve asked God to forgive me for believing and teaching error, and I am now doing my best to teach the truth about Israel.

As I mentioned in this column, I have produced an 8-DVD, 15-message series on the truth about Israel from the Bible. This series of messages is called The Israel Package. I urge readers to order this DVD package of messages.

By all means, I have not exhausted the subject and will be delving deeper into eschatology and Israel’s true place within it. But these 15 messages serve as a foundation to understanding the Biblical truth about Israel. Without this foundation, the study of eschatology is meaningless and fruitless, which is why so many Christians are so easily deceived about this subject. They’ve never been given the scriptural foundation.