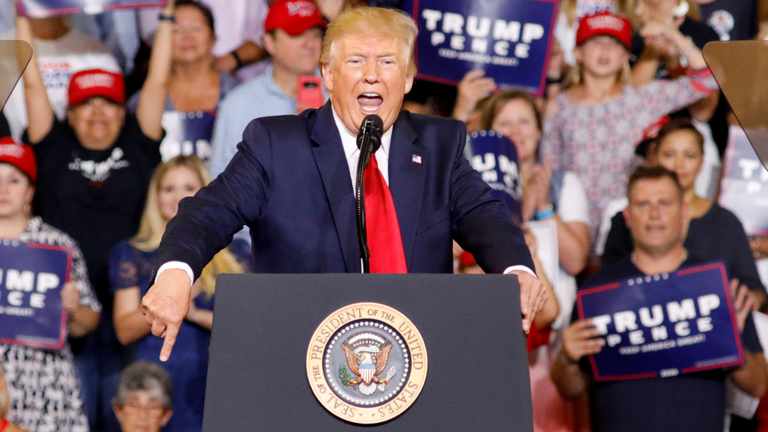 Donald Trump is channeling Benito Mussolini as he travels the country drumming up support for his 2020 bid, George Galloway has argued, warning that the US president’s re-election strategy is to stoke racial tensions.

The crowd at Trump’s campaign rally in North Carolina last week erupted in a raucous chant of ‘Send her back!’ after the US president accused Somali-American Congresswoman Ilhan Omar of being soft on terrorism.

Speaking on his Sputnik radio show, Galloway, the renowned orator, activist and former MP, didn’t mince his words when describing the incident.

As Galloway tells it, Trump welcomed the chanting with silent approval, “jutting his jaw like Mussolini. Il Duce at his worst.” He also had harsh words for the president’s baying supporters, likening them to “a crowd at some Nuremberg rally.”

“For 13 seconds Donald Trump stood silent on a stage in North Carolina this week while hordes bayed ‘Send them back’. Like a crowd at some Nuremberg rally. With Trump jutting his jaw like Benito Mussolini, Il Duce at his worst. And it was no accident..” #MOATS | LIVE pic.twitter.com/AMHgmznYu6

The theatrics are part of Trump’s re-election strategy, Galloway mused, arguing that the president is trying to paint minorities and Muslims as “the enemy within” who threaten to destroy the US.

The chanting incident caused an uproar amongst Democrats; Omar accused Trump of being “racist” and of “spewing fascist ideology.”

The president, however, has distanced himself the chanting supporters, saying he “disagreed” with their sentiments.