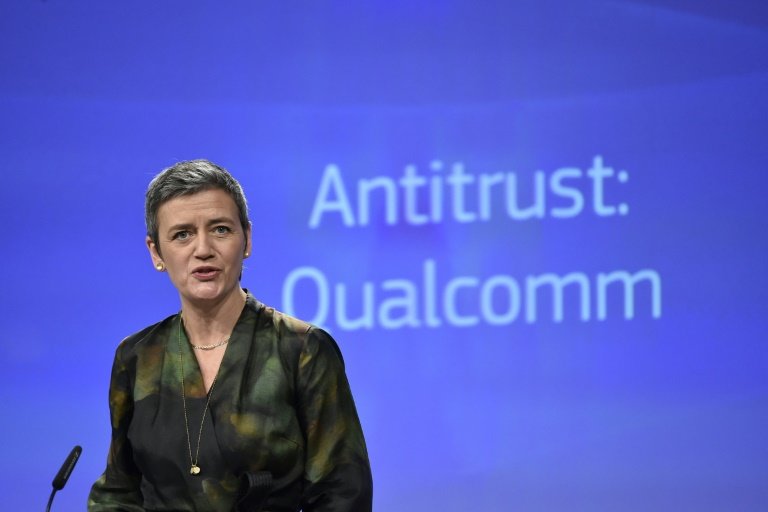 BRUSSELS—The European Union imposed a €242 million ($272 million) fine on Qualcomm Inc., QCOM 0.85% the second penalty levied on the chip maker by the bloc in 18 months and its latest antitrust action against a top U.S. tech company.

EU antitrust chief Margrethe Vestager said Thursday that Qualcomm had abused its dominant position to drive a rival out of business, hindering competition in the market for so-called baseband chips. Qualcomm is the world’s largest supplier of baseband chips. which connect smartphones and tablets to cellular networks.

Qualcomm faces several legal challenges, including in U.S. courts. At the same time, the U.S. Justice Department has warned that tough penalties may hamper the chip maker in its race against Chinese competitors to supply the rollout of 5G networks.

The EU started a formal probe of Qualcomm in 2015 after British chip maker Icera alleged that between 2009 and 2011 the U.S. company engaged in “predatory pricing,” selling certain chips at a price below the market to drive Icera out of business. Qualcomm has disputed the allegation.

Icera was subsequently bought by Nvidia Corp. , which later withdrew from the baseband-chip market.

Ms. Vestager said Thursday that the EU had internal documents from the company showing that Qualcomm had sold its baseband chipsets to key customers at below cost with the intention of eliminating a competitor.

“Qualcomm’s strategic behavior prevented competition and innovation in this market, and limited the choice available to consumers in a sector with a huge demand and potential for innovative technologies,” she said.

In a statement Thursday, Qualcomm said it would appeal the decision to the EU’s courts and would provide a financial guarantee instead of paying the fine while its appeal is pending.

“The commission spent years investigating sales to two customers, each of whom said that they favored Qualcomm chips not because of price but because rival chipsets were technologically inferior,” said Don Rosenberg, executive vice president and general counsel of Qualcomm. “This decision is unsupported by the law, economic principles or market facts, and we look forward to a reversal on appeal.”

In January 2018, the EU slapped a fine of $1.2 billion on Qualcomm over payments made to a customer, Apple Inc., at the expense of chip-making rival Intel Corp. The EU’s first-level appeals court, the General Court, upheld the ruling in April, and Qualcomm now is appealing to the bloc’s top court.

In the U.S., a federal judge ruled in May that Qualcomm unlawfully stifled competition in the market for wireless chips. The decision, which sided with the Federal Trade Commission in its antitrust suit against Qualcomm, delivered a major blow to a company that has been held up by the Trump administration as a keystone in U.S. technological competition with China.

The latest EU fine for Qualcomm comes a day after the bloc’s antitrust authorities opened a probe into Amazon.com Inc. over its treatment of merchants that sell goods on its site.

Ms. Vestager has emerged as a major technology regulator. The EU has issued $9.25 billion in fines against Alphabet Inc.’s Google, ruling it abused the dominance of its search engine and Android operating system for mobile phones to favor its own businesses.

The Danish commissioner, who is set to become a vice president of the EU’s executive for the next five years, also issued a fine to Facebook Inc. for misleading regulators during a review of its acquisition of the WhatsApp chat service. Ms. Vestager also ordered Amazon, Apple and other global tech players to pay back billions of dollars in taxes under what she alleged to be sweetheart deals with tax authorities. Google is appealing the decisions against it, and Amazon and Apple are appealing the tax cases.

—Sam Schechner in Paris and Valentina Pop contributed to this article.