RIC: The Economic and Political Alliance Poised to Crush the Zio-Anglo-American Axis 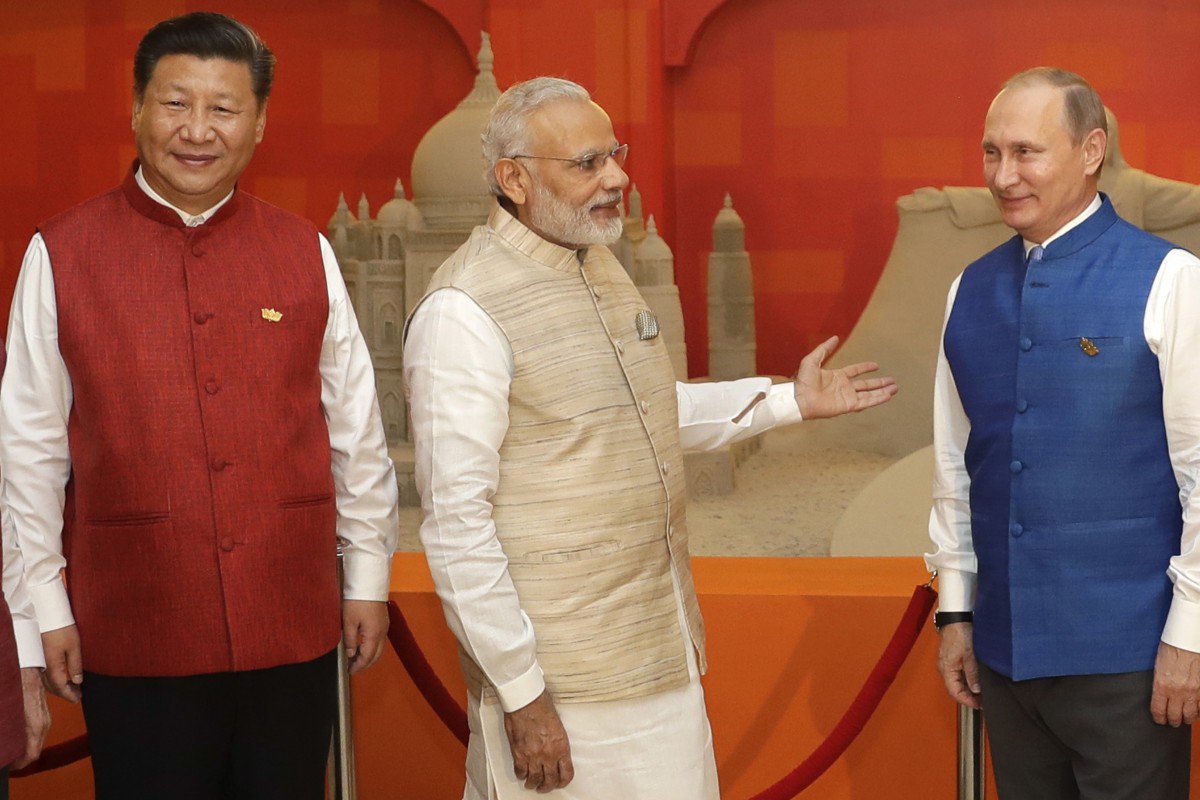 RIC: The Economic and Political Alliance Poised to Crush the Zio-Anglo-American Axis

by Pepe Escobar : Posted with permission

The most important trilateral at the G20 in Osaka was confined to a shoddy environment unworthy of Japan’s unrivaled aesthetic minimalism.

Japan excels in perfect planning and execution. So it’s hard to take this setup as an unfortunate “accident.” At least the – unofficial – Russia-India-China summit at the sidelines of the G20 transcended the fate of an interior decorator deserving to commit seppuku.

Leaders of these three countries met in virtual secrecy. The very few media representatives present in the shabby room were soon invited to leave. Presidents Putin, Xi and Modi were flanked by streamlined teams who barely found enough space to sit down. There were no leaks. Cynics would rather joke that the room may have been bugged anyway. After all, Xi is able to call Putin and Modi to Beijing anytime he wants to discuss serious business.

New Delhi is spinning that Modi took the initiative to meet in Osaka. That’s not exactly the case. Osaka is a culmination of a long process led by Xi and Putin to seduce Modi into a serious Eurasia integration triangular road map, consolidated at their previous meeting last month at the Shanghai Cooperation Organization (SCO) summit in Bishkek.

Now Russia-India-China (RIC) is fully back in business; the next meeting is set for the Eastern Economic Forum in Vladivostok in September.

In their introductory remarks, Putin, Xi and Modi made it clear that RIC is all about configuring, in Putin’s words, an “indivisible security architecture” for Eurasia.

Modi – very much in a Macron vein – stressed the multilateral effort to fight climate change, and complained that the global economy is being ruled by a “one-sided” dictate, emphasizing the necessity of a reform of the World Trade Organization.

Putin went a step ahead, insisting, “our countries are in favor of preserving the system of international relations, whose core is the UN Charter and the rule of law. We uphold such important principles of interstate relations as respect for sovereignty and non-interference in domestic affairs.”

Putin clearly underlined the geopolitical interconnection of the UN, BRICS, SCO and G20, plus “strengthening the authority of the WTO” and the International Monetary Fund as the “paragon of a modern and just multipolar world that denies sanctions as legitimate actions.”

The Russia-India-China contrast with the Trump administration could not be starker.

BRICS, as it stands, is dead. There was an “official,” pro-forma BRICS meeting before the RIC. But it’s no secret both Putin and Xi completely distrust Brazil’s Jair Bolsonaro, regarded as a Trump neocolonial asset.

Ahead of his bilateral with Trump, Bolsonaro peddled Brazil’s mineral wealth, claiming the country may now export “niobium trinkets.”

Later on, Trump eagerly praised Brazil’s “tremendous assets,” now being fully privatized to the benefit of US companies.

Xi, as he addressed the BRICS meeting, denounced protectionism and called for a stronger WTO. BRICS nations, he said, should “increase our resilience and capability to cope with external risks.”

Putin went one up. Apart from denouncing “protectionist” tendencies in global trade, he called for bilateral trade in national currencies bypassing the US dollar – mirroring a commitment by the Russia-China strategic partnership.

Russia-China, via Finance Minister Anton Siluanov and head of the People’s Bank of China, Yi Gang, have signed an agreement to switch to rubles and yuan in bilateral trade, starting with energy and agriculture, and increase cross-currency settlements by 50% in the next few years.

There will be a concerted effort to increasingly bypass SWIFT, using the Russian System for Transfer of Financial Messages (SPFS) and the Chinese Cross-Border Inter-Bank Payments System (CIPS).

Sooner or later Russia-China will entice India to join. Moscow has excellent bilateral relations with both Beijing and New Delhi, and is decisively playing the role of privileged messenger.

The mini-trade war against New Delhi launched by the Trump administration – including the loss of India’s special trade status and punishment for buying Russian S-400 missile systems – is quickening the pace of the process. India, by the way, will pay for the S-400s in euros.

There were no leaks whatsoever from Russia-India-China about Iran. But diplomats say that was a key theme of the discussion. Russia is already – covertly – helping Iran on myriad levels. India has an existential choice to make: keep buying Iranian oil or say goodbye to Iran’s strategic help, via the Chabahar port, to facilitate India’s mini-Silk Road to Afghanistan and Central Asia.

China sees Iran as a key node of the New Silk Roads, or Belt and Road Initiative. Russia sees Iran as essential for strategic stability in Southwest Asia – a key theme of the Putin-Trump bilateral, which also discussed Syria and Ukraine.

RIC or Belt and Road?

Whatever the psyops tactics employed by Trump, Russia-India-China is also directly implicated in the massive short and long-term ramifications of the Trump-Xi bilateral in Osaka. The Big Picture is not going to change; the Trump administration is betting on re-routing global supply chains out of China, while Beijing advances full speed ahead with its Belt and Road Initiative.

Trump is heavily distrusted across Europe – as Brussels knows the EU is the target of another imminent trade war. Meanwhile, with over 60 nations committed to myriad Belt and Road projects, and with the Eurasia Economic Union also interlinked with Belt and Road, Beijing knows it’s just a matter of time before the whole of the EU hits the BRI highway.

There’s no evidence that India may suddenly join Belt and Road projects. The geopolitical lure of “Indo-Pacific” – essentially just another strategy for containment of China – looms large. That’s good old imperial Divide and Rule – and all the major players know it.

Yet India, now on the record, is starting to spin that Indo-Pacific is not “against somebody.” India getting deeper into RIC does not imply getting closer to Belt and Road.

It’s time for Modi to rise to the occasion; ultimately, he will decide which way the geoeconomic pendulum swings.