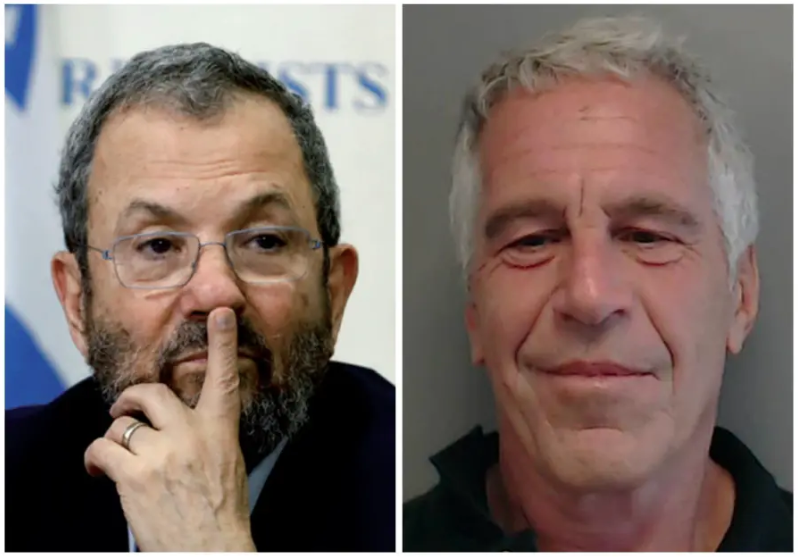 Former Israeli Prime Minister Ehud Barak was photographed entering Jeffrey Epstein’s Manhattan mansion in January, 2016 wearing a camouflage scarf around his face – the same day that a bunch of young women showed up, according to the Daily Mail.

A fourth, unidentified, woman was seen joining Epstein on a trip to Teterborough Airport in New Jersey, where Epstein keeps his plane and where he was arrested on the tarmac on July 6 after he flew in from France.

At the time, the identity of the man seen with his own security detail going to Epstein’s mansion on East 71st Street was unclear. Now DailyMail.com has confirmed it was Barak. –Daily Mail

Of note, the 77-year-old Barak says he’s planning to sue the Daily Mail for libel, and rejects the report’s ‘loathsome’ insinuations.

The former PM – who has formed a new party to try and unseat current Israeli PM Benjamin Netanyahu – admitted to the Daily Beast that he had indeed been to Epstein’s NY residence, and the financier’s infamous ‘pedophile island’ in the Caribbean, but insists that he’s ‘never met Epstein in the company of women and young girls.’

DailyMail.com has obtained exclusive pictures of one of Benjamin Netanyahu’s main challengers hiding his face as he entered the convicted sex offender’s Manhattan townhouse.

A bevy of young women were also seen going into the multi-millionaire’s lavish seven-story home on the same day that Ehud Barak was snapped.

The photographs were taken in January 2016 after Epstein, now 66, had returned to New York after an overseas trip.

Within hours at least four young women had gone to the home that the federal government wants to seize as part of its new case against the financier. –Daily Mail

Of note, the Mail does not say if the women were inside Epstein’s mansion at the same time as Barak.

Barak, who served as Israel’s PM from 1999 – 2001, and later defense minister from 2007 – 2013, received millions of dollars from Epstein as an investment in his company, Carbyne, which makes geolocation software for emergency services. Barak wrote on Facebook last weekend that he is trying to break off relations with Epstein.

“For almost five years, a company associated with Epstein has been a passive investor in a limited partnership, legally registered in Israel and under my control,” he wrote, adding “Every investor in this partnership is bound by the same commercial contract. As soon as the present charges related to Epstein became known, I instructed my lawyers to examine the options we have for expelling the company associated with Epstein from this partnership.”

At the weekend, Barak told the Israeli version of Meet the Press that he had no idea that Epstein’s charges involved underage girls. ‘He’d served his sentence for soliciting prostitution — the indictment didn’t say she was a minor,’ he said.

‘The American system itself did not label him as a persona non grata,’ Barak added. ‘The secretary who just resigned in the Trump administration was the prosecutor and he said he’d been negligent — so you expect me to have noticed [anything wrong]?’ he added, referring to Alex Acosta who resigned as labor secretary last week. –Daily Mail

Of course, Barak still took money in 2014 from the convicted pedophile and registered sex offender – which was publicly available information at the time.