Is this how they killed Neil Armstrong because he never really landed on the moon? 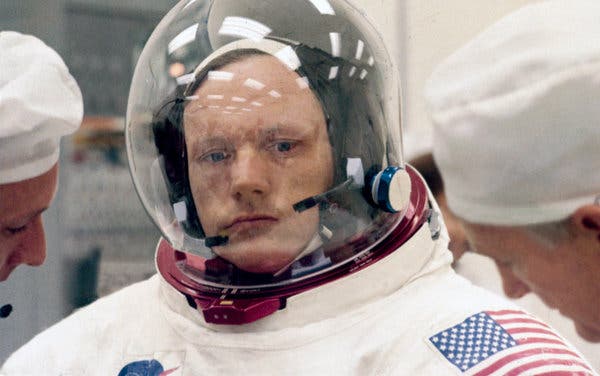 Neil Armstrong in 1969. After his death in 2012, his sons came to believe that he had received lethally flawed medical care.CreditCreditSSPL/Getty Images

Is this how they killed Neil Armstrong because he never really landed on the moon?

“Honor his example of service, accomplishment and modesty,” they wrote, telling fans of the first man to walk on the moon that “the next time you walk outside on a clear night and see the moon smiling down at you, think of Neil Armstrong and give him a wink.”

But in private, the family’s reaction to his death at 82 was far stormier. His two sons contended that incompetent post-surgical care at Mercy Health — Fairfield Hospital had cost Mr. Armstrong his life, and even one expert retained by the hospital would find serious problems with his treatment.

The hospital defended the care, but paid the family $6 million to settle the matter privately and avoid devastating publicity, documents show. The hospital insisted on keeping the complaints and the settlement secret.

Mr. Armstrong had undergone bypass surgery in early August 2012, and his wife told The Associated Press afterward that he was “amazingly resilient” and was walking in the corridor. But when nurses removed the wires for a temporary pacemaker, he began to bleed into the membrane surrounding the heart, leading to a cascade of problems that resulted in his death on Aug. 25.

In a scorching July 2014 email to the hospital’s lawyers, Wendy R. Armstrong, a lawyer and the wife of Mr. Armstrong’s son Mark, noted that Mark and his brother, Rick, would soon be traveling to Florida to speak at a ceremony marking the 45th anniversary of the first moon landing.

“This event at Kennedy Space Center will receive national news coverage,” Wendy Armstrong wrote. “Rick and Mark have been solicited by several book writers and filmmakers for ‘information about Neil that no one already knows.’” The lawyer suggested that unless the parties reached a quick settlement, the hospital would be publicly criticized for giving lethally flawed care to one of America’s most famous and revered public figures.

The medical dispute and secret settlement, never before reported, comes to light days after the 50th anniversary of Mr. Armstrong’s moon walk drew a flood of nostalgic coverage celebrating his feat. The New York Times received by mail from an unknown sender 93 pages of documents related to the astronaut’s treatment and the legal case, including dueling reports by medical experts for the two sides. Some of the documents, though marked “filed under seal,” are publicly available at the probate court’s website, confirming that the documents received by The Times are authentic. An unsigned note included in the envelope said the sender hoped the information would save other lives.

The legal settlement adds a grim footnote to the inspiring story of Mr. Armstrong, who avoided the limelight and never cashed in on his fame. It also illustrates the controversial but common practice of confidential settlements in medical malpractice and other liability cases, which protect reputations but hinder public accountability. And it shows how the extraordinary renown of a figure like Mr. Armstrong can become a powerful hammer in negotiations.

A lawyer acting as a representative of Mr. Armstrong’s grandchildren in the secret proceedings, Bertha G. Helmick, vividly characterized the stakes for the hospital in a filing in probate court in Hamilton County, Ohio, where Mr. Armstrong lived.

“Any linkage of this health provider to the death of Decedent could irreparably and unfairly forever taint the business enterprise,” she wrote. “But for Decedent’s iconic stature in the history of mankind, it is unlikely that a wrongful death settlement in this amount, with disputed causation, would have been reached. No institution wants to be remotely associated with the death of one of America’s greatest heroes.”

Ms. Helmick noted that the settlement could be undone, and her young clients would lose their share of the money, if the agreement’s terms ever came to light. “If the existence of the wrongful death action and settlement are ever revealed by the parties to the agreement, the entire payment must be repaid in full,” she wrote. (The Times does not have the full settlement agreement.)

As they scrambled in 2014 to consult medical experts about the family’s claim, hospital officials fearful of fueling rumors about the astronaut’s death used “Ned Anderson” as a pseudonym for Mr. Armstrong. 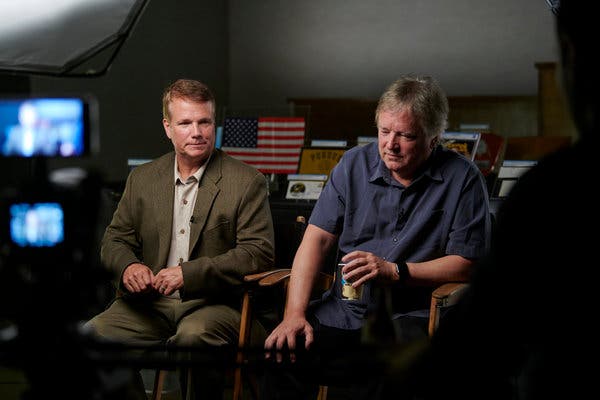 Mark and Rick Armstrong in 2018, as they prepared for an auction of personal items that belonged to their father.CreditCooper Neill for The New York Times

On July 8, 2014, a hospital lawyer, Nancy A. Lawson, wrote to Wendy Armstrong with a blunt question: “Do Mark and Rick intend to discuss the wrongful death claim at the Kennedy Space Center if no settlement is reached by Friday, July 18?” The 45th anniversary gathering was to take place on Monday, July 21.

In response, Ms. Armstrong said that information about Mr. Armstrong’s hospital treatment and death might prove very lucrative to Mark and Rick if they benefited from a film or book project.

“Obviously, the information about this wrongful death claim would prove extremely useful to such projects, and the boys’ involvement would net a monetary gain far in excess of the demand that has been made for settlement,” she wrote. Wendy Armstrong’s original demand on behalf of the family was $7 million.

Records from the Hamilton County probate court show that the bulk of the settlement, nearly $5.2 million, was split equally between Mr. Armstrong’s sons, Mark and Rick. The astronaut’s brother and sister, Dean A. Armstrong and June L. Hoffman, each received $250,000, and six grandchildren each got $24,000.

His widow, Carol, who was Mr. Armstrong’s second wife, did not participate in the settlement. “I wasn’t part of it,” she said in an interview. “I want that for the record.”

When a reporter noted that she had signed off on the settlement in her role as executor of the estate, she replied, “I had no choice — it was either that or lose my job as executor.” Asked if that meant she had not approved of the claim against the hospital, she said, “I don’t think I can answer that,” saying she was subject to a confidentiality agreement.

In a statement, Nanette Bentley, a spokeswoman for the hospital group, told The Cincinnati Enquirer late Tuesday that the “public nature of these details is very disappointing — both for our ministry and the patient’s family who had wished to keep this legal matter private.”

Karen Armstrong, Rick Armstrong’s former wife, said, “We are all under nondisclosure agreements through the courts — everyone associated with the family is — so no one is allowed to say anything.”

James R. Hansen, an emeritus professor of history at Auburn University and author of the Armstrong biography “First Man” that became the basis for the movie, said he had been aware of the problems with Mr. Armstrong’s care “since very shortly after he died.” Mr. Hansen said he withheld the information from an updated 2018 edition of his book “out of respect for certain members of the family.”

“But I do believe that the whole story of what happened should be known,” he added. “His life story really isn’t complete until it is known, and even more importantly, the full story of his death may prevent similar tragedies in the future.”

Three expert reviews of Mr. Armstrong’s medical records — one prepared at the request of the Armstrong family and two for the hospital — provide an outline of what happened after he was admitted to Fairfield Hospital, in the Cincinnati suburb of Fairfield, with symptoms of heart disease. Records do not say why he or his family chose Fairfield, a community hospital that is part of a larger group of Catholic hospitals now called Bon Secours Mercy Health, rather than, for example, the University of Cincinnati Medical Center, a larger academic hospital.

[Read more about what cardiac experts think about what happened to Neil Armstrong.]

After running tests, doctors at Fairfield decided to do bypass surgery immediately, timing some experts would later question. As a standard part of the procedure, doctors implanted temporary wires to help pace his heartbeat as he recovered.

But when a nurse removed those wires, Mr. Armstrong began to bleed internally and his blood pressure dropped. Doctors took him to the hospital’s catheterization lab, where an echocardiogram showed, in one expert’s words, “significant and rapid bleeding.”

There, doctors drained some blood from his heart, to prevent it from being pressed and hampered by the accumulated fluid.

The astronaut, who avoided the limelight and never cashed in on his fame, was buried at sea in September 2012.CreditBill Ingalls/NASA, via Getty Images

Mr. Armstrong was then moved from the catheterization lab to an operating room. The records do not make clear what doctors may have done there, but he appears to have lingered for a week or longer before dying on Aug. 25. His family announced at the time that the cause of death was “complications resulting from cardiovascular procedures.”

The expert reviews focus on the hospital’s decision to bring Mr. Armstrong to a catheterization lab rather than directly to an operating room when he began to experience complications.

“The decision to go to the cath lab was THE major error,” Dr. Joseph Bavaria, a vice-chair of cardiothoracic surgery at University of Pennsylvania wrote in a review conducted at the request of the Armstrong family.

Dr. Richard Salzano, a cardiothoracic surgeon at Yale Medical Center who reviewed the case for the hospital, saw the decision to bring Mr. Armstrong to the catheterization lab as “defensible” but “certainly riskier than taking the patient to the O.R.”

Dr. Salzano told hospital lawyers that after the bleeding began, Mr. Armstrong might have had a 50-50 chance of survival had surgeons reopened his chest in the catheterization lab, but that “the patient became unsalvageable on the way to the O.R.,” case records show.

Dr. Salzano declined to speak about the case. Dr. Bavaria did not immediately respond to a request for comment.

Another doctor who examined the case for the hospital, Dr. J. Stanley Hillis, generally supported the way the case was handled, including the decision to treat Mr. Armstrong in the catheterization lab when complications arose.

“I know they asked me to keep it confidential,” Dr. Hillis, a practicing cardiologist in Indiana, said. “I just talked to them and gave them a brief opinion. He declined to comment further, stating he had only “vague recollections” of the medical details from five years ago.

Dr. Ashish Jha, a professor of medicine at Harvard University and a hospitalist who regularly cares for patients post-cardiac surgery, said he “largely” agreed with Dr. Bavaria’s conclusion. “These people should have gone directly to the operating room,” Dr. Jha said.

Dr. Jha, who was not involved in the case, reviewed the experts’ reports for The Times. “If someone has dropped their blood pressure substantially and this is a code blue, that means they are having life-threatening bleeding. I don’t totally understand why they went to the cath lab,” he said.

Dr. Jha also questioned the hospital’s original decision to perform the bypass surgery on Mr. Armstrong on an emergency basis.

“It feels to me like his death was wholly preventable,” he said. “It’s not completely clear to me he needed the cardiac surgery that he got. It was probably a borderline call, but sounds like he was rushed into surgery based on the notes.”

Dr. Craig Smith, the cardiac surgeon at Columbia University Medical Center who performed President Bill Clinton’s 2004 quadruple bypass, declined to speak specifically to Mr. Armstrong’s case, given that he had not seen the medical records.

He did, however, comment that a patient with the type of complications described in the expert reviews would not typically be brought to a catheterization lab for treatment.

“Generally, if a patient develops signs of bleeding inside the chest after pacing wires are pulled under observation, they would usually go straight to the operating room and usually survive,” Dr. Smith said.