Eritrean migrants wear chains to mimic slaves at a demonstration against the Israeli government’s policy to forcibly deport African refugees and asylum seekers from Israel to Uganda and Rwanda, outside the Knesset, Israel’s parliament, in Jerusalem, on Jan. 17, 2018. Hebrew signs read, “no for deportation, Rwanda equal to death” and “slaves for sale.” (AP Photo/Oded Balilty)

By LAZAR BERMAN
THE TIMES OF ISRAEL 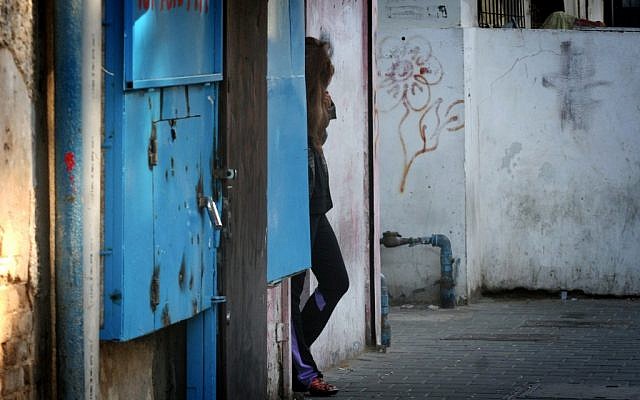 Israel has as many as 8,500 slaves, according to a new comprehensive study of worldwide slavery. Israel placed 111 out of 162 slave-holding countries in the Global Slavery Index 2013, recently published by the Australian Walk Free Foundation. Mauritania was found to have the most serious slavery problem.

According to the study, the first-ever country-by-country survey of its kind, Israel has 7,700 to 8,500 slaves. Still, Israel ranked well relative to the lower standards in the Middle East, though Lebanon, Tunisia, and Egypt scored better than the Jewish state.

The Palestinian Authority and the Hamas-run Gaza Strip were not covered by the survey.

Israel did place well in the study’s examination of the risk of enslavement. The survey measured five factors to determine the policies adopted by the country to combat slavery, human rights, human and economic development, political stability, and women’s rights. Israel was the only Middle Eastern country to enjoy a low risk-of-slavery ranking, but still ranked much lower than European states.

The study claimed that “foreign workers make 40-90 percent of the populations of Jordan, Saudi Arabia, Israel, the United Arab Emirates and Kuwait.” However, in Israel there are 300,000 foreign workers out of a total population of 8 million. The Walk Free Foundation could not be reached for clarification by the time of publication.

The trend in Israel is driven by the sex trade and the human trafficking that comes with it. There are 15,000 prostitutes in Israel, Rebecca Hughes from ATZUM’s Task Force on Human Trafficking wrote in The Times of Israel, entering the profession at an average age of 14.

“By the 1990’s Israel was established as a destination country for trafficking, and international sex trafficking victims had replaced the local market,” Hughes wrote. “Israel’s flesh trade was booming and making between half a billion to three quarters of a billion dollars a year. It was a particularly desirable market for traffickers because the purchase of sexual services was, and still is, legal in Israel. ”

“Throughout the 1990’s traffickers acted with impunity and, according to the Hotline for Migrant Workers, smuggled 3,000 women annually into Israel,” she added.

The deteriorating situation led the US State Department to rank Israel as a Tier 3 nation in its Trafficking in Persons report, the lowest ranking. Tier 3 nations faced potential economic sanctions. The report was a wake-up call for Israel’s government, which passed a comprehensive anti-trafficking law, and was upgraded to a Tier 1 state.

According to the index, there are nearly 30 million people trapped in slavery around the world.

The study defined slavery as “the possession and control of a person in such a way as to significantly deprive that person of his or her individual liberty, with the intent of exploiting that person through their use, management, profit, transfer or disposal. Usually this exercise will be achieved through means such as violence or threats of violence, deception and/or coercion.”

It relied on secondary sources for its study, especially reports from media, NGOs, and governments. It also used local surveys and interviews.

In absolute numbers, India led the list with up to 14.7 million slaves, followed by China and Pakistan. Mauritania, with 3.8 million inhabitants and over 150,000 slaves, had the highest prevalence of slavery.

Ireland, Iceland, and the UK enjoy the lowest prevalence of slavery, the survey said.

The Walk Free Foundation is a nonprofit that seeks to end modern slavery, according to its website. The organization was founded in May 2012 by Australian metal magnate Andrew Forrest, who first became aware of the problem when his teen-aged daughter worked alongside slaves at a Nepalese orphanage.