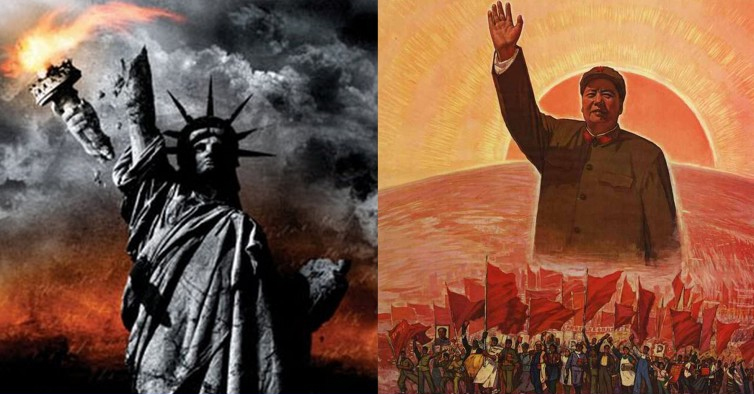 Communist China was created by the Jews and serves their interests.

Communist China was created by Rothschilds and their agents.

October 1 1949, Mao Tse Tsung declared the founding of the People’s Republic of China in Tiananmen Square, Beijing. He was funded by Rothschild created Communism in Russia and also the following Rothschild agents: Solomon Adler, a former United States Treasury official who was a Soviet Spy; Israel Epstein, the son of a Jewish Bolshevik imprisoned by the Tsar in Russia for trying to ferment a revolution there; and Frank Coe, a leading official of the Rothschild owned IMF. Jews were behind the rise to power of Mao Tse Tung, the communist dictator of China, who tortured and murdered tens of millions of Chinese (mostly Christians) during his brutal reign. Sidney Shapiro, an American Jew, was in charge of China’s propaganda organ. Another Jew, Israel Epstein, was Mao’s Minister of Appropriations (Finance).

Mao would murder sixty million innocent Chinese people under his rule mainly to destroy traditional Chinese culture in order to gain total control. As with Christianity, any practitioners of spiritual systems where outlawed, killed, and thrown into gulags, to die a slow death through slave labor, starvation and torture. The Communistic systems became the new culture of control. With China under their flag, Tibet was next on the list as being the last bastion of spiritual and historical knowledge. All the Jewish systems seek to remove spiritual knowledge from Gentiles and keep it in the hands of the Jewish elite. This is a major part of their indoctrination program. There has been a major Jewish population in China for over a thousand years such as the Jews of Kaifeng.

China has been built up into the biggest global superpower by the Jewish financial elite and every valuable Western technology has been shipped there. This was identical to what the Jews did with their USSR, turning it into a massive super state of military superpower, to wage conquest upon the rest of the earth, which they did. The only reason they were halted was the second war monkey wrenched their plans globally and led to the stagnation and fall of the USSR. There are reports that the America tactical silos are contracted to Israeli firms for certain electronics’ functions, they also have their agents all over the Pentagon and other key Western military and government networks.

The covert Jewish control of Mao and the Chinese Communist Party (CCP) explains why convicted Jewish spy Jonathan Pollard, found guilty of stealing thousands of classified documents from the Defense Department where he worked, gave these materials to his masters, the Israeli Mossad operating in the U.S.A. The Israelis, in turn, transferred these valuable military secrets straight to Red Chinese dictators in Beijing. Pollard, a Jew born in Galveston, Texas, sits in a federal prison today. Recently, when Israeli Prime Minister Netanyahu came to America, he visited Pollard in prison and assured the despicable turncoat Israeli spy that the Israeli government was working behind-the-scenes with Obama’s White House to pardon the convicted spy. Meanwhile, Pollard is a national hero in Israel—honored for stealing America’s most precious military secrets which Israel gave to Communist China.

Even now according to official statistics Communist China again carried out more executions than the rest of the world put together. Amnesty International believes thousands are executed and sentenced to death there every year, but with numbers kept a state secret the true figure is impossible to determine.

‘Whatever the price of the Chinese Revolution, it has obviously succeeded not only in producing more efficient and dedicated administration, but also in fostering high morale and community of purpose. The social experiment in China under Chairman Mao’s leadership is one of the most important and successful in human history’.– David Rockefeller.

The most under reported, however is the “Soft Power” tactic currently being implemented by the Peoples Republic of China in the United States.

It was America that showed the world how to mass produce everything from automobiles to televisions to airplanes. It was the great American manufacturing base that crushed Germany and Japan in World War II. But now we are witnessing the deindustrialization of America. Thanks to Jewish control over government, thousands of factories have left the United States and move to China in the past decade alone. Millions upon millions of manufacturing jobs have been lost in the same time period. The United States has become a nation that consumes everything in sight and yet produces increasingly little.

The United States has become bloated and spoiled and our economy is now just a shadow of what it once was. Once upon a time America could literally outproduce the rest of the world combined. Today that is no longer true, but Americans sure do consume more than anyone else in the world.

The Economic Policy Institute in Washington, D.C., estimates that America. lost 2.7 million jobs as a result of the U.S.-China trade deficit between 2001 and 2011, 2.1 million of them in manufacturing. Wages of American workers have also suffered due to the competition with cheap Chinese labor, EPI says. A typical two-earner household loses around $2,500 per year from this dynamic.

Manufacturing was the hardest-hit industry, with fabrication of high-tech goods like semiconductors and electronics suffering the most, accounting for more than half of the $217.5 billion increase in the trade deficit between 2001 and 2011.

Thanks to the suicidal manufacturing policy in US, China GDP has risen from $350 billion in 1990 to $20 trillion (PPP) and surpassed the US in terms of GDP based on purchasing power parity (PPP). United States of America was the largest but International Monetary Fund and World Bank rank China since as the world’s largest economy. The US has been the global economic leader since overtaking the UK in 1872. Most economists previously thought China would pull ahead in 2019.

So if the United States continues to allow its manufacturing base to erode at a staggering pace how in the world can the U.S. continue to consider itself to be a great nation? We have created the biggest debt bubble in the history of the world in an effort to maintain a very high standard of living, but the current state of affairs is not anywhere close to sustainable. As of June 30, 2012, China held a total of $3.24 trillion in foreign exchange reserves (Bloomberg News 2012), about 70 percent of which were held in U.S. dollars. Every single month America does into more debt to communist China and every single month America gets poorer.

The deindustrialization and debt of the United States should be a top concern for every man, woman and child in the country. It is not that hard to understan what happens when the debt bubble pops. But sadly, most Americans do not have any idea what is going on around them.

Because America’s debt is exploding to unmanageable proportions, the United States finds itself financially dependent on China as one of its main creditors. Americans owe The Peoples Republic well over a trillion dollars and are going further into debt, but the Communist ruling elite in Beijing are not satisfied with having the U.S. as a virtual debtor client state. China’s political elite are also using their financial power to manipulate how Americans think — or don’t think — about China. Along with computers, electronics, and house wares, a new kind of Political Correctness is also being manufactured in China.

The Communist elite which controls China wants Hollywood to portray the Peoples Republic in a favorable light to American audiences, while rewarding the hard Left U.S. film industry with hefty profits for their cooperation.

These are dangerous events which directly threaten the United States. The threats offered by an increasing powerful Communist China are already all but ignored by the zionist mass media in US, both on the Right as well as on the Left. Beijing’s elite, however, are taking no chances. Ignoring the China threat is not enough, the American people must be made to love the Peoples Republic and all its works.

From looking at things, the Syrian conflict could be a smaller warm up to a planned global conflict. Russia has already participated in 2013 in a mass joint war games exercise with China on Eastern European soil with thousands of Red Chinese troops. They where training specifically for war against Western forces, this was kept out of the mainstream of course. This is what America and Western Europe have been prepped for over the decades, and how they planned to take Germany down into Communism during the First war, which they manipulated into existence for the sole purpose of taking all of Europe down into Communism, and they nearly did. It is a repeating set of tactics they are using.

The West is past the demoralization point and has entered into the destabilization phase. The Protest Wall St was organized by Jewish agents of Rothschild to be the start of a Communist movement, which is part of the subversion of decades of indoctrination of students into Communist ideals. At this point, one way or another, Zionists are seeking to take the West down should they start a full out Communist revolution, civil war or open war. One way or another, it seems Red Chinese troops will be on Western Soil “Liberating” us from the Fascist oppressors. This is what the Jews did with the Red Army rolling over Europe and the East, enslaving the many for the Jews.