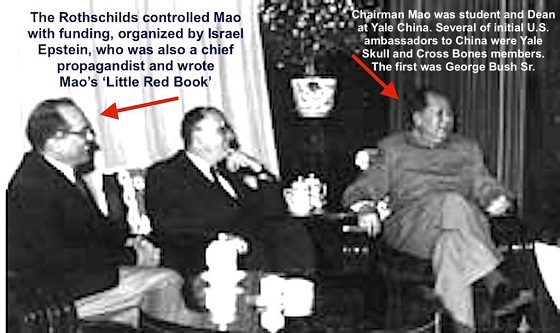 Red China is a Creation of Globalists

If one is blind to the truthful account of history, understanding of current events will never break the mind controlled barrier of sanitized awareness. The globalists or whatever synonym name you choose personifies the forces behind the screens that shape the political, economic and cultural impositions on the world. China has not been immune to the infliction of obscurity in the implementation of what actually is driving their regime.  As the old Chinese curse has it: “May you live in interesting times”, has proven to be much more than a platitude, it is a model for planetary enslavement. How did this conquest begin and where is it going?

In a special report by Texe Marrs, The Illuminati and Its Triad of Evil presents a credible account that most have never confronted before.

“Another revelation that U.S.A. and western journalists and historians are prohibited from writing about concerns the Jewish origins of Mao Tse Tung’s Red Chinese revolution. In fact, Mao was a stupid and inept Chinese peasant who was schooled by Skull and Bonesmen and initiated into the internationalist Masonic Lodge by socialist Jews from the United States. This was done with the tacit permission of President Franklin D. Roosevelt, a 32nd degree Mason and, later, President Harry S. Truman a 33rd degree Mason.

Mao all along has been a closely-controlled puppet of Jewish revolutionaries—men like Israel Epstein and Sidney Shapiro, who lived in China and had the reins of power over two key areas of Beijing’s Communist Government—the treasury (money) and the media (propaganda). Interestingly, Zionist Jews hold sway over these same two essential instruments of government today in the United States.”

An additional source explaining that Communist China was created by Rothschilds and their agents, presents an even more sinister chronology of the New World Order plan to extend their rule.

“October 1 1949, Mao Tse Tsung declared the founding of the People’s Republic of China in Tiananmen Square, Beijing. He was funded by Rothschild created Communism in Russia and also the following Rothschild agents: Solomon Adler, a former United States Treasury official who was a Soviet Spy; Israel Epstein, the son of a Jewish Bolshevik imprisoned by the Tsar in Russia for trying to ferment a revolution there; and Frank Coe, a leading official of the Rothschild owned IMF. Jews were behind the rise to power of Mao Tse Tung, the communist dictator of China, who tortured and murdered tens of millions of Chinese (mostly Christians) during his brutal reign. Sidney Shapiro, an American Jew, was in charge of China’s propaganda organ. Another Jew, Israel Epstein, was Mao’s Minister of Appropriations (Finance).

Mao would murder sixty million innocent Chinese people under his rule mainly to destroy traditional Chinese culture in order to gain total control. As with Christianity, any practitioners of spiritual systems where outlawed, killed, and thrown into gulags, to die a slow death through slave labor, starvation and torture. The Communistic systems became the new culture of control. With China under their flag, Tibet was next on the list as being the last bastion of spiritual and historical knowledge. All the Jewish systems seek to remove spiritual knowledge from Gentiles and keep it in the hands of the Jewish elite. This is a major part of their indoctrination program. There has been a major Jewish population in China for over a thousand years such as the Jews of Kaifeng.”

If these authorships do not provide the weight of trustworthiness for your worldview, maybe the admittance from the flagship of the establishment narrative would convince the faint hearted. In an official history of the Council on Foreign Relations, the CFR’s Peter Grose explains CHINA’S GLOBALIST AGENDA.

“The Council turned in earnest to the problem of communist China early in the 1960s. Various Council publications had started developing the idea of a ‘two-China’ policy – recognition of both the Nationalist government of Taiwan and the communist government on the mainland. This, Council authors suggested, might be the least bad policy direction. Professor A. Doak Barnett published a trail-blazing book for the Council in 1960, Communist China and Asia. A major Council study of relations between the United States and China commenced in 1964, the year China exploded its first nuclear bomb; the group met systematically for the next four years. “Contentment with the present stalemate in relations with the Chinese is not statesmanship,” declared Robert Blum of the Asia Society, the first director of the project. “American impatience and the strong currents of political emotion often make it impossible to plan ahead to manage our policy in a persevering but flexible way.’” (Peter Grose, Continuing The Inquiry: The Council on Foreign Relations from 1921 to 1996, New York, Council on Foreign Relations, 2006; ‘ ‘X’ Leads the Way’).

Oh such a noble concept, Statesmanship. In any other reality the translation means consolidation into the global order of human bondage. The nature of the Chinese regime is based upon totalitarianism. An unholy union with the mega corporatists has produced the biggest economic transfer of all times into a Communist reign of terror model for the future of all humanity.

Preston James, PhD writes in The Hidden History of the Incredibly Evil Khazarian Mafia. “The opium addictions created by Rothschild opium sales to China harmed China so much that China went to war on two occasions to stop it. These wars were known as the Boxer Rebellions or the Opium Wars.”

“Beijing -The Chinese elite is a merger between the Communist leadership, Hong Kong tycoons, and the criminal Triads. All three factions derive their power from Illuminati collaboration.

China has appeared autonomous because the Illuminati developed the country internally, funding ‘revolutionary’ political parties spouting nationalist slogans. The reasoning was that the Chinese people would revolt against overt foreign domination, but embrace their place in the NWO if they believed they were in control.

Lord Bertrand Russell revealed this plan in a report on China published in 1920:”

This is the true record of intrusion driven by the proponents of Talmud rule.

So it is completely consistent when Richard M. Nixon surrendered to the Henry Kissinger prescriptions for opening the door to China. Remember that Kissinger was a communist agent for David Rockefeller. His own admission from the Corbett Report, China and the New World Order, is most revealing.

HENRY KISSINGER: “But they really are issues of the construction of a new world order, that’s what this is about, and that’s the sort of dialogue the Chinese are generally good at and so a partnership between us is central. A conflict between us is going to exhaust us both. In tactical exercises it cannot be conclusive.

INTERVIEWER: And the New World Order could satisfy both?

KISSINGER: It has to satisfy both because otherwise it will lead to tensions that will exhaust us both.”

(Source: Henry Kissinger on China and the New World Order)

The net result is that the Red Chinese have been integrated into the globalist axis of evil. The fruits from the tutelage of Mao Tse Tung have produced a poison that is reflected in the current ruling commissars of the Chinese dragon.

Alex Newman in The New American identifies the prominent role of the illuminati prototype that China is advancing in the essay, Communist Chinese Dictator to Push Globalism at World Economic Forum.

“In establishment-media news reports, the brutal Chinese dictator actually sounded a lot like a rank-and-file member of the globalist Council on Foreign Relations. Using deceptive rhetoric about “inclusive” economies and globalization, language pioneered by the unfathomably wealthy Rothschild dynasty, Xi’s minions boasted that their dear leader would unabashedly promote globalism at the annual summit of political and business leaders in the Swiss Alps.

“With the rise of populism, protectionism, and nativism, the world has come to a historic crossroad where one road leads to war, poverty, confrontation and domination while the other road leads to peace, development, cooperation and win-win solutions,” declared Communist Chinese State Council Information Office boss Jiang Jianguo at a World Trade Organization summit in Geneva.”

Do you see a pattern of world domination exhibited over the lingering and sinister history from the shrouded zealots of Baal?  China is building an empire out of Mao’s Red Book of perdition. ”

“The Communist Party of China, having made a clear-headed appraisal of the international and domestic situation on the basis of the science of Marxism-Leninism, recognized that all attacks by the reactionaries at home and abroad had to be defeated and could be defeated. When dark clouds appeared in the sky, we pointed out that they were only temporary, that the darkness would soon pass and the sun break through.”

Know your enemy and the power behind the throne.